You are here:
Home / Health News / When Amy Touzell nearly gave up on her dream career, her ‘mentor mum’ Alison Taylor stepped in

When Amy Touzell nearly gave up on her dream career, her ‘mentor mum’ Alison Taylor stepped in

Senior orthopaedic surgeon Alison Taylor, 61, has mentored Amy Touzell, 38, through her training and career in a field where only 5 per cent of surgeons are women. Amy now regards Alison as her “orthopaedic mum”. 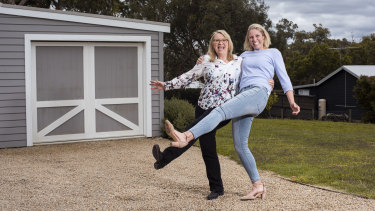 Alison Taylor (left) on Amy Touzell: “She is quite loud at times, and there was still the remnant of the idea that trainees should be seen but not heard.”Credit:Josh Robenstone

AMY: In 2009, when Alison interviewed me at Melbourne’s Royal Australasian College of Surgeons for the five-year orthopaedic surgical training program, it was the first time I’d met a female orthopaedic surgeon. She had this stern face and I was terrified. Being the second woman to go through the training program in Victoria, she was like a god.

I was an unaccredited registrar in the trauma centre of a big city hospital and the only female in a unit of 20 surgeons and about eight registrars. I’d worked for two years in orthopaedics and I was burnt out and felt unsupported.

In 2010, while I was working for Alison, she cancelled her fully booked, private operating list for a day to watch her daughter, Kate, in the national swimming trials. The operations were elective and she moved the list to the following week. I’d never seen male consultants do that. It showed me that it’s possible to combine family commitments with surgery. I got on the training program the following year.

The following year, I fell pregnant. I rang Alison and her response was, “That’s awesome.”

Our relationship evolved from her being my boss to becoming friends. When I married my partner Adam, a software engineer, in 2012, Alison and her family came to the wedding.

The following year, I fell pregnant. I rang Alison and her response was, “That’s awesome.” Some other surgeons saw it as a workforce shortage and having to deal with a pregnant trainee. At 36 weeks, I was assisting a senior orthopaedic surgeon with a complex hip replacement. The operation wasn’t going well, and in front of the whole theatre he said, “Get the junior registrar, who’s not pregnant.”

I walked out in tears and called Alison, howling, “I don’t want to do this. I’m going to take a year off.” She talked me around, saying, “It’s one case, and it sounds as if the consultant wasn’t coping.” She was right. He later pulled me aside and apologised.

Alison is highly regarded. Her specialty is foot and ankle surgery, and I specialised in that because of her. She’s a role model for everyone, not just women. She’s always been her own person, but as a junior doctor working in NSW and contemplating orthopaedics I tried to be one of the boys, pretending to be interested in rugby league and soccer, both of which I hate.

We haven’t disagreed on much, but when she was Foot and Ankle Society president, I presented an idea for a registrars’ instructional course and she culled it back. It was hard not to be offended, but the course was successful and my original idea wouldn’t have worked. I admire Alison’s patience. She’s unflappable. She’s also a good teacher. Now she mentors me on how I can mentor juniors, and I still call her to consult about difficult cases. I call Alison “my orthopaedic mum”.

ALISON: When I offered Amy a job, she was only hours away from not pursuing orthopaedics. I said, “You’re going to be a really good orthopaedic surgeon.” I’d heard she was intelligent but also strong-minded. I didn’t think that was bad. She re-wrote the residents roster, putting more residents on duty when theatres and clinics were happening, and administration jumped up and down. However, it actually worked better and cost the hospital less.

I like Amy, and I like that she laughs at herself. She mothered all the juniors and gave them
nicknames. A great trait of hers, and why I believe she’ll be very successful, is that she asks for
advice about her career and her personal life.

When Amy got onto the training program, as I had in my younger years, she clashed with a
few senior male surgeons. They weren’t used to working with females; also, she’s quite loud at times, and there was still the remnant of the idea that trainees should be seen but not heard.

I started the training program in 1989 and was the only woman on it in Victoria at the time.
Being in such a male domain was challenging. In my first job, some older guys who’d never worked
with a woman didn’t like it, but most were great.

I don’t want her to burn out. She can have the balance of career and home life.

When Amy found out she was pregnant, she rang saying she would have to take time out.
She felt pressured because the other registrars were taking on some of her workload. I
said, “It doesn’t matter. What matters is that you get through the training program and
become an orthopaedic surgeon.”

Sometimes she’s like a bull at a gate, so enthusiastic and incapable of subtlety. If she has too much on her plate, she gets anxious. I’ve taken on too much in the past, and then work feels like a chore rather than a joy. I don’t want her to burn out. She can have the balance of career and home life.

With the Australian Orthopaedic Association diversity strategy and the Orthopaedic Women’s Link, both of which support women through their training and careers, what was a grunting boys’ club for many years is trying hard, and not doing a bad job at moving with the times.

Because my family were involved with the Point Leo Surf Life Saving Club on Victoria’s Mornington Peninsula, and Adam and Amy were with Jan Juc SLSC, south of Torquay, we used to meet at surf carnivals. Adam is a surf lifesaver and Amy is a triathlete, and they’d talk with my daughter, Kate, who’s a competitive swimmer, about her training. Kate is now 22 and our son, Tom, is 23.

I held both Amy’s babies when each was a few days old. Holding Olivia did feel like my first
grandchild. She’s six now and Lachlan is four. I admire Amy’s enthusiasm. She is not someone who thinks she’s fabulous, even though she is, and she understands that, despite being a rare commodity and very good at her job, she still has a lot to learn. I’m proud of her.

To read more from Good Weekend magazine, visit our page at The Sydney Morning Herald, The Age and Brisbane Times.