How onions and old cheese could help inflammatory bowel disease: Scientists find diets rich in pre and probiotics ease gut cramps – but milk, pasta and rice will make them worse

A diet rich in pre and probiotic foods could improve the symptoms of millions of inflammatory bowel disease (IBD) sufferers, researchers say.

Researchers from the University of Massachusetts set strict meal plans for 19 patients and monitored them over two months.

Their diets were made up of lots of prebiotics, like onions and bananas, and probiotics, such as yohurts and old cheese.

After eight weeks more than two in three of participants reported a dramatic decline in the severity of their symptoms.

The scientists say the two food types increase the number of ‘good’ fatty acids which lessen inflammation in the gut.

She warned sufferers should steer clear of milk, pasta, rice, refined sugar and fresh cheese, which all only further inflame the gut. 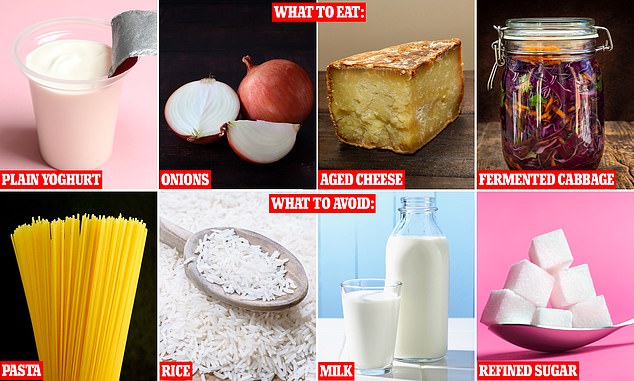 A diet rich in pre and probiotic foods could improve the symptoms of millions of inflammatory bowel disease (IBD) sufferers, researchers say

Prebiotics are types of fibre which serve as food for this bacteria, helping them thrive in the body.

As well as onions and bananas, prebiotic foods which feature on the list include; garlic, artichokes, leeks, asparagus and ground flax seeds.

IBD is the name given to a group of conditions in which the intestines become inflamed.

Two major types of IBD are Crohn’s disease and ulcerative colitis. There are thought to be around 620,000 sufferers in the UK, with a further 3million in the US.

Inflammatory bowel disease (IBD) is a medical term that describes a group of conditions in which the intestines become inflamed (red and swollen).

Ulcerative colitis affects the large intestine (colon) whereas Crohn’s disease can occur in any part of the intestines.

People of any age can get IBD, but it’s usually diagnosed between the ages of 15 and 40.

The conditions are chronic and cannot be cured so treatment usually relies on medication and lifestyle changes to manage the symptoms, but may include surgery.

The latest study found 61.3 per cent of patients who followed the diet, called IBD-AID, reported a significant easing in the condition.

Meals were designed to increase the numbers of bacteria which produce short-chain fatty acids (SCFAs).

These nourish intestine lining cells and help to reducing inflammation.

Assistant professor Maldonado-Contreras and her colleagues tested it on patients who had severe Crohn’s disease or ulcerative colitis.

After analysing stool samples from the patients, they found that the foods included in the diet correlated with a large amount of SCFAs.

They also found a decline in ‘bad’ strains of bacteria, such as escherichia, alistipes, and eggerthella, all of which inflame the gut.

Patients who stuck to the diet for a minimum of 50 per cent of the time for eight weeks saw a dramatic decrease in the severity of their symptoms, the researchers added.

It adds that all trans fats and foods containing partially hydrogenated oil, such as shop-bought muffins and cakes, should be avoided.

The diet has three phases. The first, termed ‘bringing it back to basics’, aims to help patients who have severe symptoms and who cannot tolerate many foods.

It advises eating soft-cooked pureed food, including smoothies, vegetables and even meat and fish, via a blender.

The second phase tries to introduce patients with symptoms which are hopefully now less severe to more foods and textures.

More fibrous foods are added, such as beans and lentils, but are still pureed or cooked until they are very soft.

Their bowel movements will be more solid and controlled.  They can now eat things such as stir-fried vegetables and meat, shellfish, citrus fruit and apples.

Assistant Professor Maldonado-Contreras and her colleagues said the results allowed them to customise diet guidelines to emphasise foods known to improve gut health.

She said: ‘Your food is your best medicine. Nowhere else is this more real than for those suffering from inflammatory bowel disease (IBD).