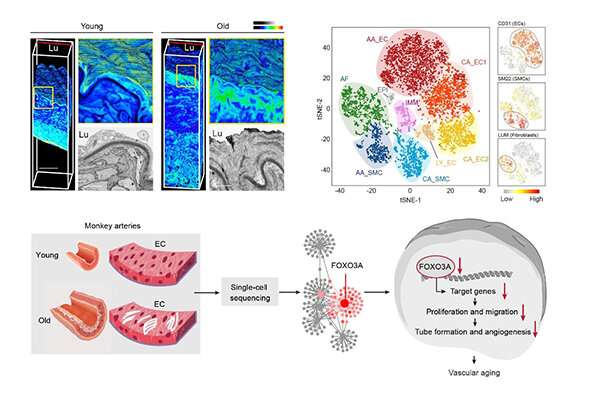 Cardiovascular disorders are leading causes of morbidity and death worldwide. Age-associated changes in arterial properties, such as endothelial dysfunction and structural alterations, are considered to be initial events in the development of atherosclerosis. Due to the high heterogeneity of vascular cells from different sources, our understanding of human arterial aging and the development of interventions against human arterial aging and associated diseases are hindered.

Recently, scientists from the Institute of Zoology of the Chinese Academy of Sciences and Peking University have worked jointly and established the first single-cell transcriptomic atlas of primate arterial aging.

Using the single-cell transcriptome sequencing technology, they drew a comprehensive aging roadmap of cynomolgus monkey arteries at the single-cell resolution and identified FOXO3A loss as a key driver for arterial endothelial aging.

This study entitled “A single-cell transcriptomic landscape of primate arterial aging” has been published online in Nature Communications on May 5th, 2020.

The aortic and coronary arteries are two of the most lesion-susceptible regions in the human vasculature with age. The researchers analyzed senile aortas, which exhibited characteristics of vascular aging, including increased wall thickness, fibrous cap formation, arterial calcification and elastic lamina fragmentation.

They then depicted the single-cell transcriptomic landscape of arteries from young and aged non-human primates and unraveled aorta-specific and coronary artery-specific molecular signatures for eight vascular cell types.

This work provides a critical resource for the understanding of primate arterial aging and contributes important clues to future treatment of age-associated vascular disorders.