You are here:
Home / Health News / A novel therapeutic target for recovery after stroke

A novel therapeutic target for recovery after stroke 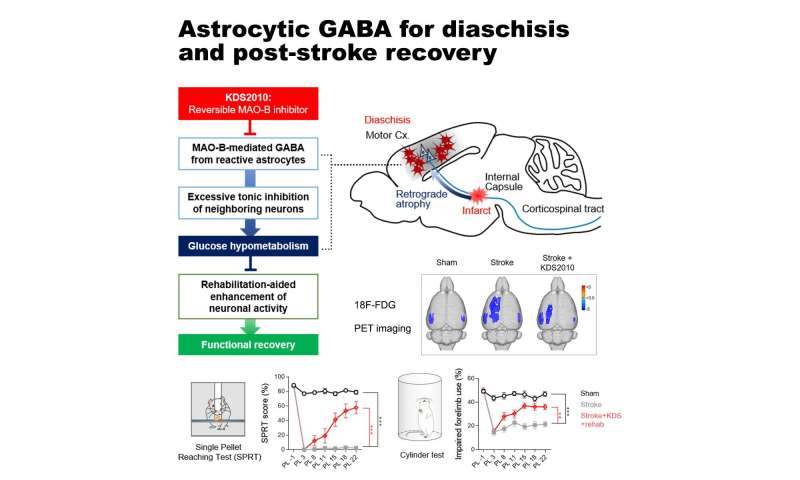 Every year, 15 million people worldwide suffer from stroke according to the World Health Organization. Five million of those die and another five million are permanently disabled. Stroke is one of the most commonly reported causes of death and greatly impacts patients’ quality of life. However, despite its prevalence and negative impact, there are no direct medical treatments for recovery after stroke and patients rely on rehabilitation.

A stroke occurs when the blood supply is interrupted or reduced due to bleeding or occlusion of blood vessels in some part of the brain. Brain cells subsequently begin to die within minutes, causing a regional brain damage. In addition, the stroke leads to a loss of function, called diaschisis, in other brain regions connected to the damaged area. Proposed 115 years ago, diaschisis worsens symptoms and prognosis of stroke patients. However, despite broad clinical interest, diaschisis’ molecular and cellular mechanisms are still unknown.

In this study, the researchers reported that diaschisis in the cortex of the mouse brain with subcortical stroke is caused by the decline of neuronal activity, due to the reduction in neuronal glucose uptake. They showed that this is dependent on pathological changes of astrocytes, the most abundant cell type in the brain. “Astrocytes respond to the presence of any chemical disregulation, caused by stroke. They become reactive, proliferate and increase in size,” says C. Justin Lee, Director of the Cognitive Glioscience Group, at the IBS Center for Cognition and Sociality and co-corresponding author of this research. The researchers discovered that reactive astrocytes synthesize and release an excessive amount of GABA, an inhibitory neurotransmitter, that affects the activity of neighboring motor neurons.

They also demonstrated that the diaschisis is significantly alleviated by the treatment with KDS2010, which efficiently blocks astrocytic GABA synthesis. developed by the same group, KDS2010 is currently licensed out to the pharmaceutical company, Neurobiogen. It works by inhibiting MAO-B, one of the key enzymes in the production of GABA. They further reported that rehabilitation training of the animals with stroke was not effective to recover the motor function. However, the treatment with KDS2010 accompanied by rehabilitation training dramatically mitigated the motor impairment due the stroke.

“Diaschisis is observed in migraine, glioblastoma, traumatic brain injury in addition to stroke. This study will provide a novel therapeutic approach for those diseases as well,” adds Kim Hyoung-Ihl, researcher at GIST and co-corresponding author of the study.