You are here:
Home / Health News / A novel prognostic biomarker for a doubled survival in head and neck cancer 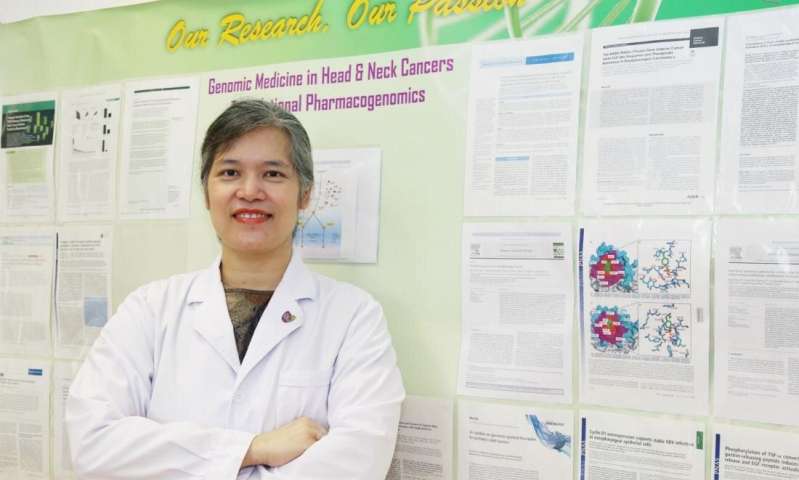 A recent study conducted by the Faculty of Medicine at The Chinese University of Hong Kong (CU Medicine) discovered a novel genetic biomarker which can predict the survival of head and neck cancer patients. There are over 0.7 million new head and neck squamous cell carcinoma (HNSCC) cases globally each year. However, currently there is no clinical implementation of any genetic biomarker to predict outcomes for these patients after standard treatment. A study led by Professor Vivian Wai Yan LUI, an expert in genomic medicine and Associate Professor of the School of Biomedical Sciences at CU Medicine, and her research team, has identified that mitogen activated protein kinase (MAPK) pathway mutations found in almost 20% of HNSCC patients can predict favorable clinical outcomes with standard therapy. Their survival also doubled when compared with other patients. The finding has just been published in the journal Life Science Alliance.

HNSCC include cancers of the oral cavity, pharynx and larynx, with main risk factors like smoking, drinking alcohol, as well as human papillomavirus (HPV) infection. The rising incidence of HNSCC globally is pushing scientists to look for personalised treatment based on the genetic make-up of individual patients. The aggressive nature of HNSCC has often led to aggressive treatments such as chemotherapy and radiation therapy which compromise the quality of life in patients in many cases. In fact, HNSCC survivors have the second highest suicidal rate (64.4/100,000) in the U.S. among all cancer patients (second to pancreatic cancer patients), likely due to psychologic distress and poor quality of life. Thus, an effective way to identify patients who can be treated with less intensive therapies to maintain a better quality of life after treatment has become an emerging focus in the clinical side.

The research team has recently discovered that HNSCC patients with MAPK pathway mutations in their tumors have remarkably longer survival than those without (around 95 months vs around 48 months, median overall survival). This feature is only relevant to MAPK pathway mutations. The finding was further validated with another group of HNSCC patients. Data used in the study are from the world’s largest and most comprehensive dataset, The Cancer Genome Atlas (TCGA), and an independent dataset of the Memorial Sloan Kettering-Integrated Mutation Profiling of Actionable Cancer Targets (MSK-IMPACT).

This is the first of its kind in-depth pathway genomic study exploring the potential clinical use of HNSCC patient tumors for clinical outcome prediction. More importantly, the team further examined the potential underlying outcome-favoring reasons through experiments. The research results uncovered the following important findings:

Professor Vivian Wai Yan LUI, associate professor, School of Biomedical Sciences at CU Medicine, remarked, “Our findings that MAPK pathway mutations contribute biologically to better HNSCC patient survival is highly unexpected as MAPK signaling is known to drive cancer growth. It really subverts our understanding of HNSCC. It is also exciting to have identified an HPV infection independent biomarker which can predict a good outcome in the treatment of an HNSCC patient. This finding may lead to future clinical trials for treatment de-intensification on particular patients based on the existence of MAPK pathway mutations in their tumors.”

To conclude, the study not only found biomarkers that can predict the therapeutic outcome of patients with HNSCC with standard treatment, but also have a long term impact on its clinical management and bring important implications for how gene mutations can directly shape the tumor’s immune microenvironment in patients.