You are here:
Home / Health News / When parents should worry about teen girls’ selfies

When parents should worry about teen girls’ selfies 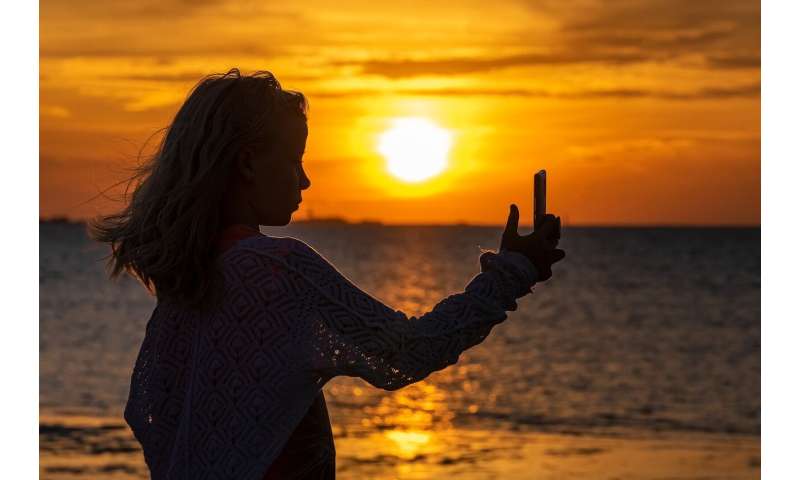 A study of teenage girls’ selfie-taking behaviors found that taking and sharing selfies on social media is not linked to poor body image or appearance concerns.

However, when adolescent girls spend too much time agonizing over which photo of themselves to post, or rely heavily on editing apps to alter their images, there may be cause for concern.

The study, by researchers at the University of Arizona, found that selfie editing and time invested in creating and selecting the perfect selfie were both related to self-objectification, which led to body shame, appearance anxiety and more negative appearance evaluations in teen girls.

“Self-objectification is the idea that you come to think of yourself as an external object to be viewed by other people,” said senior study author Jennifer Stevens Aubrey, an associate professor of communication in the University of Arizona College of Social and Behavioral Sciences. “Your orientation to the world is not an internal one, where you’re thinking about how you feel or what you know or what you can do, but rather what you look like to other people. The focus on taking the perfect selfie seems to be encouraging girls to learn to see themselves as external objects for people to look at and admire.”

The researchers’ findings, published in the Journal of Children and Media, were based on a study of 278 teenage girls, ages 14 to 17. The teens completed an online survey in which they answered questions about how often they share selfies on social media and how often they use specific photo editing techniques, such as reducing red eye or using an app to smooth their skin or make them appear thinner. They also responded to a series of statements designed to measure how much time and effort they spend selecting which selfies to share on social media—what researchers referred to in the paper as their level of “selfie investment.”

In addition, the girls completed a series of questionnaires designed to measure their levels of self-objectification and appearance concerns.

“Our main finding was that we really shouldn’t be too worried about kids who take selfies and share them; that’s not where the negative effects come from. It’s the investment and the editing that yielded negative effects,” Aubrey said. “Selfie editing and selfie investment predicted self-objectification, and girls who self-objectify were more likely to feel shameful about their bodies or anxious about their appearance.”

The researchers said they chose to focus on adolescent girls because they are especially vulnerable to self-objectification.

“Girls are socialized in a way that makes them self-objectify to a greater degree than boys would; that’s a pretty consistent finding,” said lead study author Larissa Teran, a doctoral candidate in the University of Arizona Department of Communication, who co-authored the study with Aubrey and doctoral student Kun Yan.

Girls also are more likely than boys to experience negative consequences, such as body image issues, as the result of self-objectification, which can in turn lead to problems like depression and eating disorders, the researchers said.

“Self-objectification is the pathway to so many things in adolescence that we want to prevent,” Aubrey said. “So, interventions really should focus on how we can encourage girls to develop an awareness of themselves that’s not solely hinged on what they look like to other people.”

The researchers said parents and caregivers of adolescent girls should be aware of red flags on teens’ phones, such as selfie editing apps or camera rolls teeming with selfies. If a teen seems to be selfie-obsessed, it might be time for a talk.

“Having those conversations at a very early age is one of the ways problems can be avoided in the future,” Teran said.

The researchers also note that there can be different motivations for sharing selfies.

“Selfies are a part of the media landscape, but you should post them for reasons other than trying to get people to admire your appearance or your body,” Aubrey said. For example, posting a selfie on vacation or with friends may be more about sharing an experience than focusing on appearance.