Brain imaging data analysis is indispensable in the studies of neuroscience. However, analysis of obtained brain imaging data has been heavily dependent on manual processing, which cannot guarantee the accuracy, consistency, and reliability of the results.

Conventional brain imaging data analysis typically begins with finding a 2-D brain atlas image that is visually similar to the experimentally obtained brain image. Then, the region-of-interest (ROI) of the atlas image is matched manually with the obtained image, and the number of labeled neurons in the ROI is counted.

Such a visual matching process between experimentally obtained brain images and 2-D brain atlas images has been one of the major sources of error in brain imaging data analysis, as the process is highly subjective, sample-specific, and susceptible to human error. Manual analysis processes for brain images are also laborious, and thus studying the complete 3-D neuronal organization on a whole-brain scale is a formidable task.

To address these issues, a KAIST research team led by Professor Se-Bum Paik from the Department of Bio and Brain Engineering developed new brain imaging data analysis software named ‘AMaSiNe (Automated 3-D Mapping of Single Neurons)’, and introduced the algorithm in the May 26 issue of Cell Reports. 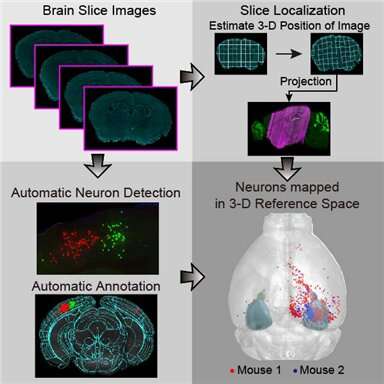 AMaSiNe automatically detects the positions of single neurons from multiple brain images, and accurately maps all the data onto a common standard 3-D reference space. The algorithm allows the direct comparison of brain data from different animals by automatically matching similar features from the images, and computing the image similarity score.

Unlike other existing brain imaging data analysis methods, AMaSiNe can also automatically find the alignment conditions from misaligned and distorted brain images, and draw an accurate ROI, without any cumbersome manual validation process.

The two co-lead authors of this study, Jun Ho Song and Woochul Choi, exploited these benefits of AMaSiNe to investigate the topographic organization of neurons that project to the primary visual area (VISp) in various ROIs, such as the dorsal lateral geniculate nucleus (LGd), which could hardly be addressed without proper calibration and standardization of the brain slice image samples. 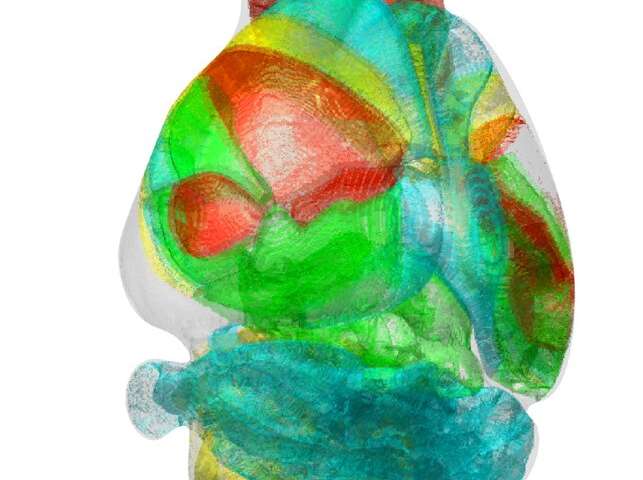 In collaboration with Professor Seung-Hee Lee’s group of the Department of Biological Science, the researchers successfully observed the 3-D topographic neural projections to the VISp from LGd, and also demonstrated that these projections could not be observed when the slicing angle was not properly corrected by AMaSiNe. The results suggest that the precise correction of a slicing angle is essential for the investigation of complex and important brain structures.

AMaSiNe is widely applicable in the studies of various brain regions and other experimental conditions. For example, in the research team’s previous study jointly conducted with Professor Yang Dan’s group at UC Berkeley, the algorithm enabled the accurate analysis of the neuronal subsets in the substantia nigra and their projections to the whole brain. Their findings were published in Science on January 24.

AMaSiNe is of great interest to many neuroscientists in Korea and abroad, and is being actively used by a number of other research groups at KAIST, MIT, Harvard, Caltech, and UC San Diego.

Professor Paik said, “Our new algorithm allows the spatial organization of complex neural circuits to be found in a standardized 3-D reference atlas on a whole-brain scale. This will bring brain imaging data analysis to a new level.”