Girl, 14, is diagnosed with a killer brain tumour after doctors blamed puberty for her crippling headaches FIVE times before 4cm mass was spotted

A schoolgirl has been diagnosed with a deadly brain tumour after doctors repeatedly blamed puberty for her crippling headaches.

Lily Wythe, from Southend-on-Sea in Essex, started to complain of migraines after returning from a family holiday in Spain in July last year.

The 14-year-old took paracetamol and soldiered on, but her headaches quickly became more severe and started to take a toll on her daily life.

Within weeks the teenager was suffering from double vision, slurred speech, and problems with her balance and vomiting.

Lily’s parents took her to see doctors on five separate occasions and claim the headaches were dismissed as a normal part of puberty.

It wasn’t until September that the teenager was diagnosed with diffuse intrinsic pontine glioma (DIPG), which only a handful of patients survive. 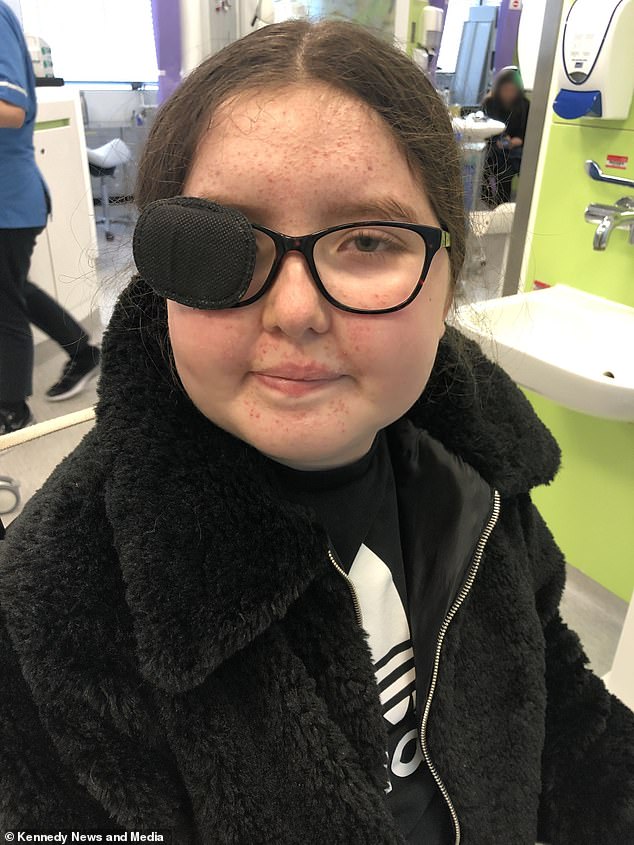 Lily Wythe, 14, from Southend-on-Sea, Essex, had complained of migraines since coming home from a family holiday in Spain in July (pictured wearing an eye patch due to double vision caused by her tumour) 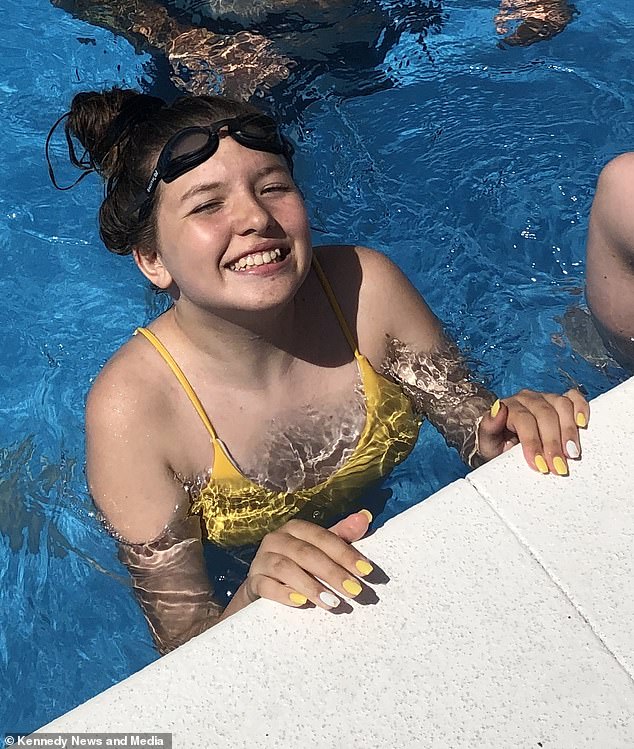 She took paracetamol and soldiered on, but the symptoms quickly became more debilitating. Pictured on holiday in Spain before her diagnosis 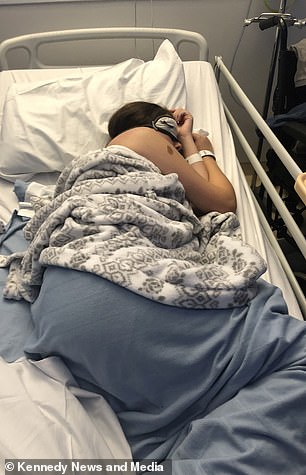 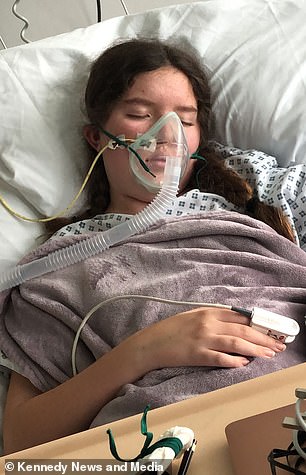 The teenager began suffering double vision, slurred speech, problems with her balance and vomiting. Pictured after radiotherapy to kill the mass

The 4cm mass had developed at the base of Lily’s brain. There is no way to remove it without causing severe brain damage or death.

Recalling the devastating diagnosis, her mother Diane, 40, said: ‘I can’t tell you what happened in that room when doctors spoke to us.

‘I remember the start of the conversation but I can’t remember anything else, we were distraught.

‘All I remember is my husband Martin standing there telling me “we’ve got to go and tell Lily she’s got cancer” and I just thought “how do you do that?”.

‘Doctors explained they couldn’t remove it because it was intertwined around all of her vital nerves that control everything.

She added: ‘When we were told that only one course of radiotherapy was an option it was horrendous because we just felt helpless.

‘These children die very slow and painful deaths. It’s not like they just go to sleep, they lose their sight, their hearing, they lose everything – but cognitively they’re still there. Their body is failing them and they’re aware of it, it’s heartbreaking.’

DIPG tumors are found in an area of the brainstem called the pons, which controls many of the body’s most vital functions such as breathing, blood pressure, and heart rate. 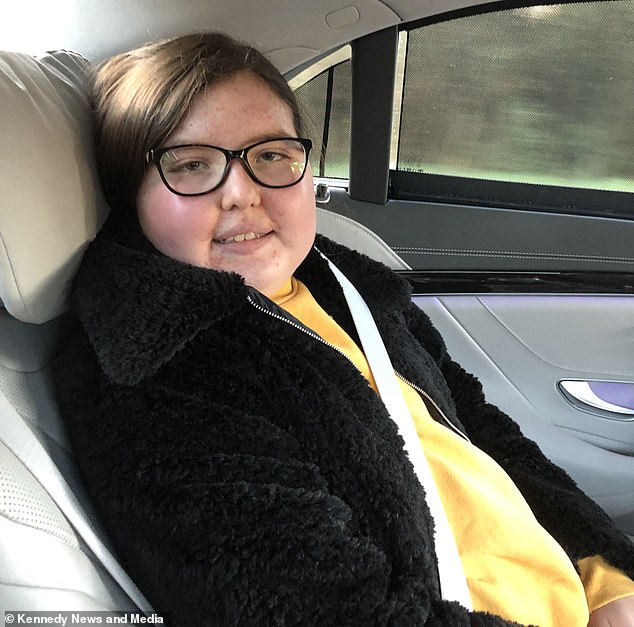 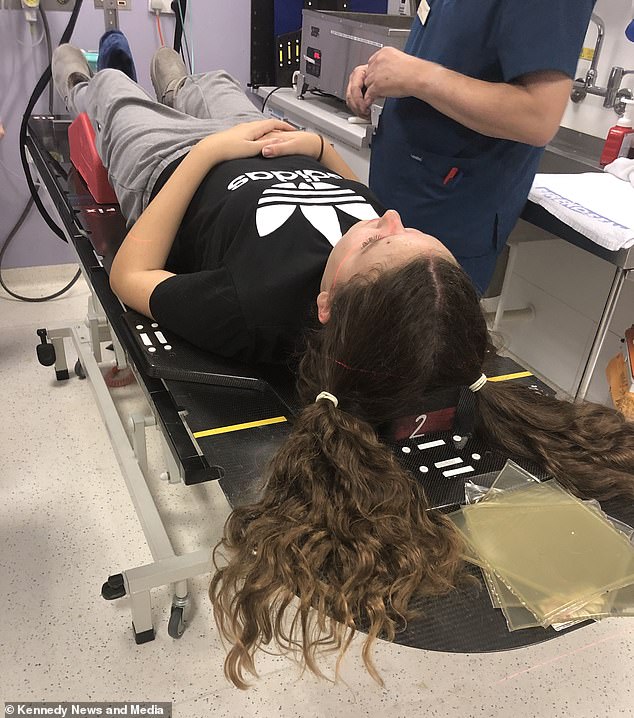 It wasn’t until September that the teenager was diagnosed with diffuse intrinsic pontine glioma (DIPG), which only a handful of patients have survived 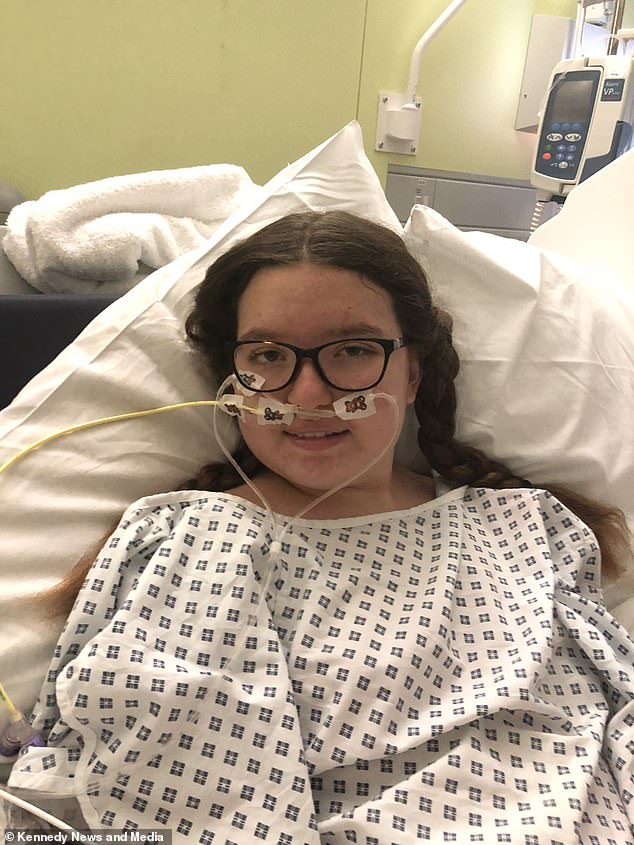 Only a handful of children are diagnosed with them each year in the UK, while up to 300 youngsters develop them annually in the US.

When Lily’s balance worsened and her speech became slurred during a family walk, her mother demanded she have an MRI scan.

It was at Great Ormond Street Hospital (GOSH) on October 8 that Mrs Wythe and husband Martin, 41, were told Lily, then 13, had inoperable DIPG.

Her mother said: ‘What Lily’s got is incurable, but we’re focusing on being positive because that’s the kind of people we are.

‘We have to have a plan because when it decides to come back, you need to be able to move straight away as we saw Lily deteriorate quite quickly with the initial tumour. 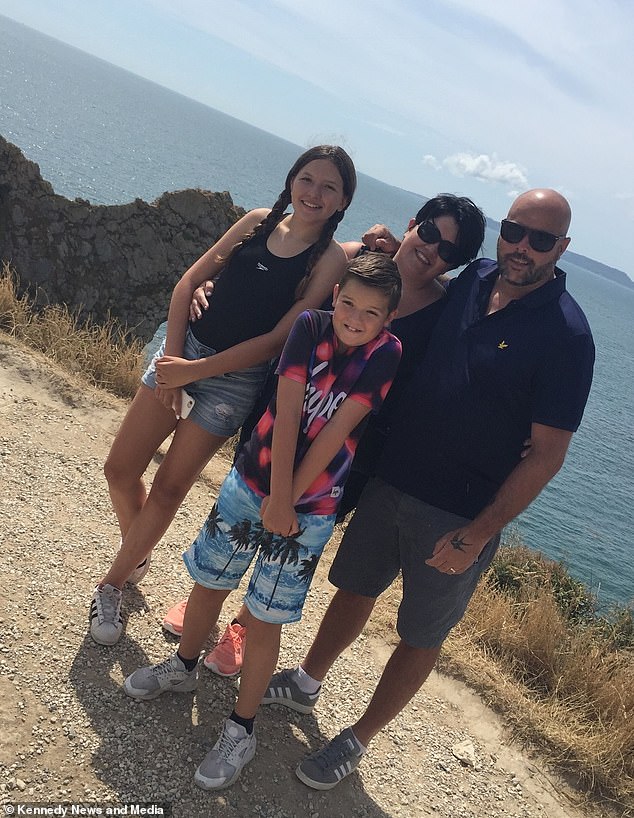 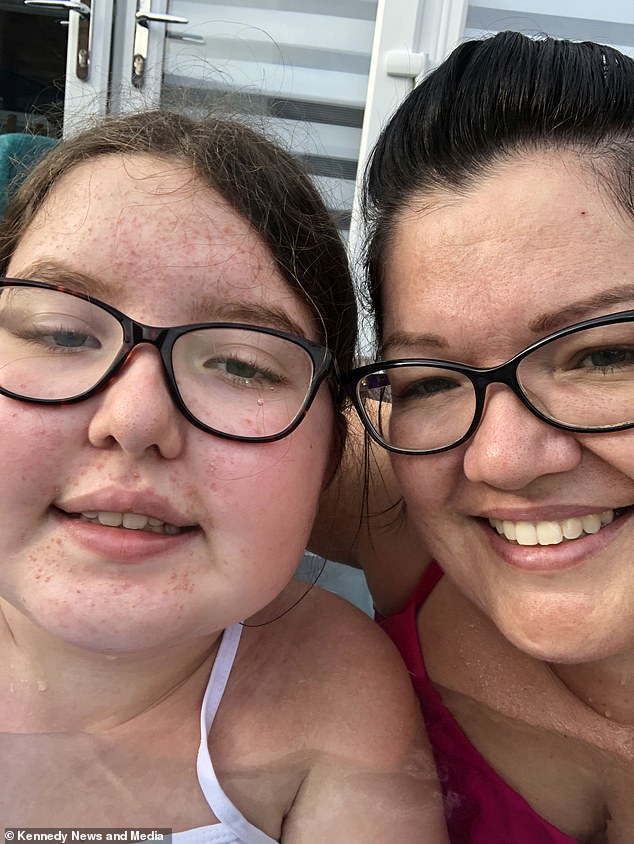 It was during a family trip to the beach in September, along with 12-year-old brother Josh Wythe, that Lily’s balance worsened and she started slurring her speech (pictured with her mother) 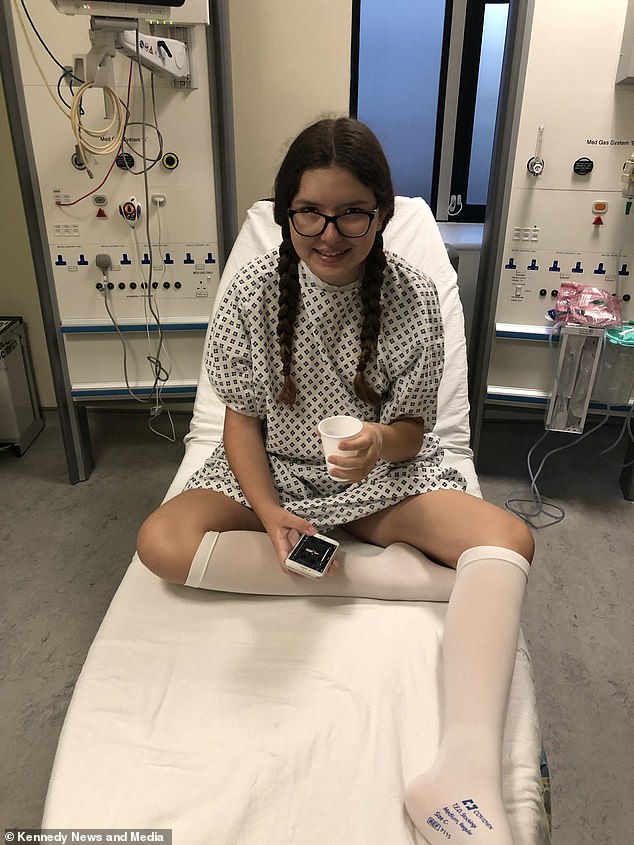 Lily started a two-and-a-half-week course of radiotherapy on October 14, which has temporarily made her feel better

‘We’ve worked out that the average cancer treatment in America is £300,000 a year.

‘We are very positive because that’s just the way we are as people but we’re also scared because it’s the unknown – nobody knows what’s around the corner.’

It was during a family trip to the beach in September, along with 12-year-old brother Josh Wythe, that Lily’s balance worsened and she started slurring her speech.

Mrs Wythe knew it was something more sinister and took her daughter to the hospital.

She said: ‘When I spoke to her she just looked really tired, started to slur and was unsteady on her feet so I took her to A&E.

‘We we were given a handout to log migraines but I knew she was seriously ill so asked for an MRI.

‘I think they had me down as a neurotic mother, which annoyed me because I’ve never been like that. 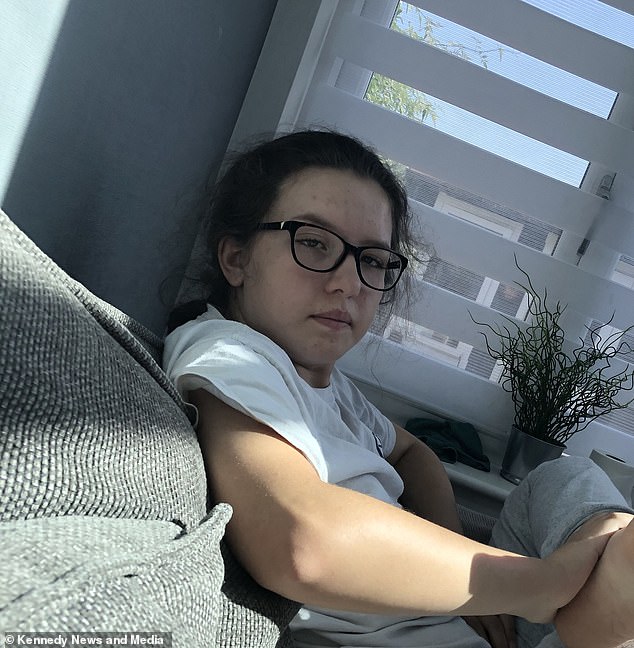 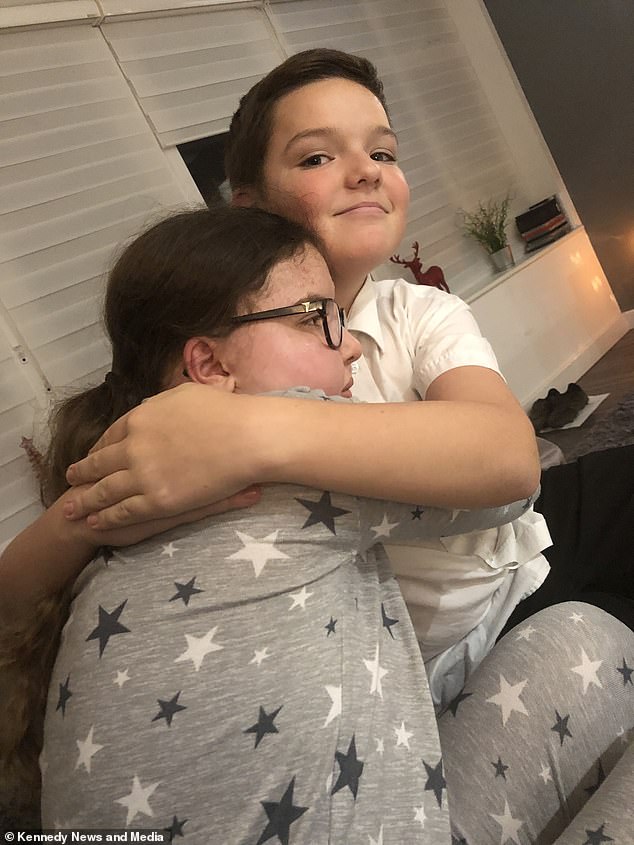 Her mother set up a GoFundMe page in November and has raised £35,000 towards the £300,000 target. Lily pictured with brother Josh

‘All four of us have probably used the NHS a handful of times in our lives – we’re not ill people and my kids never go to the doctors. I was absolutely petrified there was something seriously wrong with her.

‘I knew she was poorly but I didn’t think she was seriously ill. I didn’t think they were going to say it was a brain tumour even though she had all the classic signs.

‘Technically Lily is too old for this because it’s a childhood tumour – it generally affects children upto the age of nine or ten.’

Lily started a two-and-a-half-week course of radiotherapy on October 14, which has temporarily made her feel better.

But the family are anxious as doctors have told them the tumour ‘almost always’ comes back.

She said: ‘It’s absolutely crazy that people are donating to the GoFundMe.. We don’t know most of the people donating money, we’ve never met them before, but the thought that they’re all out there rallying around for you is absolutely amazing.

‘The fact that people are out there helping us is extraordinary, it restores your faith in human beings.’

You can donate to the fundraising page here.

Diffuse intrinsic pontine glioma (DIPG) is a rare type of brain tumour that can’t be operated on because of it’s location within a crucial part of the brain, called the pons.

This area is responsible for a number of critical bodily functions, such as breathing, sleeping and blood pressure.

The high-grade brain tumour, which mostly affects children, tends to grow quickly and often spreads to other parts of the brain or spinal cord.

Most diagnoses occur in youngsters between the ages of five and 10. The cause of the tumour remains unknown.

More than 90 per cent of its victims will die within 18 months of diagnosis, according to figures.

One of the early indicators of the cancer is a child falling, tripping or losing balance.