A 9-year-old dog in the United Kingdom is lucky to be alive after swallowing a wooden kebab skewer which later pierced through her kidney.

Last month, the Yorkshire terrier Lilly began showing signs of discomfort, such as vomiting and diarrhea. She also had a fever. When her owner Norma Mackay took her to a veterinarian in Dewsbury, West Yorks, an ultrasound revealed a sharp object had pierced through one of the dog’s kidneys.

HALF OF AMERICA'S CATS ARE OVERWEIGHT OR OBESE, STUDY FINDS 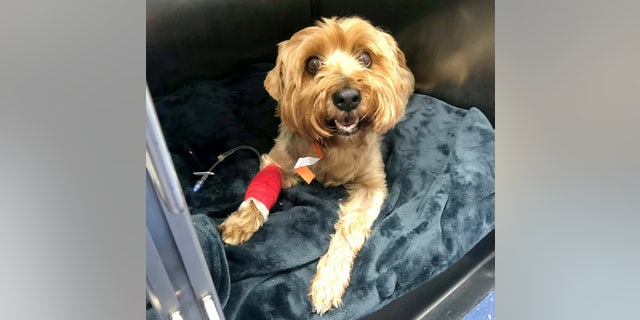 Lilly made a swift recovery and went home the day after surgery.
(SWNS)

“It was on this ultrasound scan that the stick could be seen passing through her left kidney. We were all stunned. None of us have ever encountered something like this before,” Natalie McQuire, a veterinarian who treated Lilly, told South West News Service (SWNS), a British news agency. 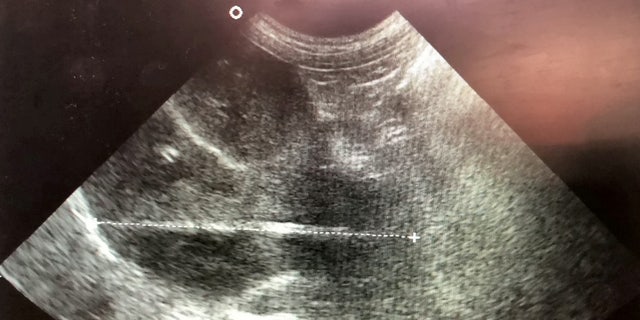 The skewer can be seen in an ultrasound image.
(SWNS)

The dog required surgery to remove the four-inch skewer, which she likely ate when Mackay held a barbecue roughly four weeks before Lilly fell ill. Veterinarians said the skewer passed through Lilly’s intestine, across her abdomen, and through her kidney, according to SWNS. 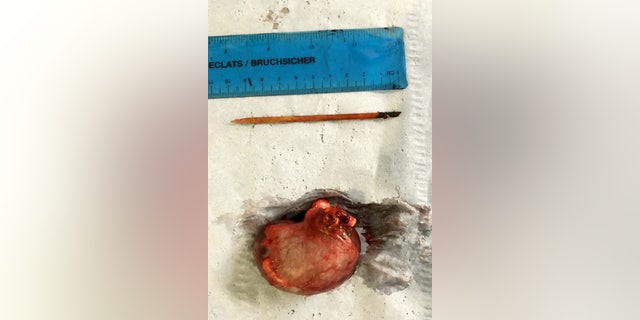 The 4-inch long skewer and the pierced kidney which had to be removed.
(SWNS)

“Lilly underwent surgery to remove the stick, which was found to have passed all the way through the kidney and was sticking out from either side. Unfortunately, due to the skewer’s length and the damage caused, it was not possible to save the affected kidney so this was removed at the same time,” added McQuire.

The surgery was a success and Lilly is now recovering.

“Lilly made a fantastic recovery from her surgery. She was kept overnight on intravenous fluids to help support her remaining kidney before being sent home the following day,” McQuire said. “Her owner was as surprised as everyone else at the findings.”