You are here:
Home / Health News / Postpartum depression in women of color: ‘More work needs to be done’

Postpartum depression in women of color: ‘More work needs to be done’

Women of color are at a higher risk of experiencing postpartum depression than white women and less likely to receive the care they need. In this Special Feature, health disparities expert Prof. Tiffany Green helps us examine some of the reasons behind these inequalities. 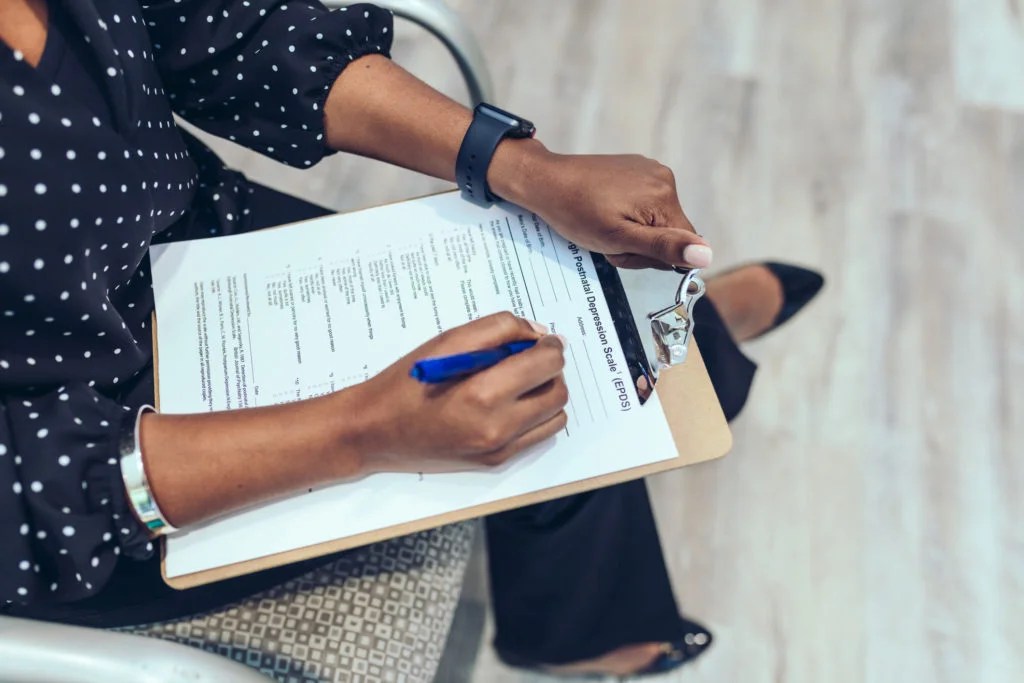 Postpartum depression (PPD) is a condition in which the new parent may experience persistent feelings of sadness, emptiness, low energy, anxiety, irritability, and poor sleep or appetite.

According to the latest data from the Centers for Disease Control and Prevention (CDC), PPD affects over 11% of women in the United States, or 1 in 9 women. However, the condition does not affect all women equally.

Studies suggest that PPD is more likely to occur in women of color. One such study — led by researchers at the Icahn School of Medicine at Mount Sinai in New York — found that African American women were more than twice as likely to experience postpartum depressive symptoms as white women. The risk for Hispanic women was also almost twice as high.

But the figures may be even higher — some researchers have suggested as many as 50% of women with PPD do not report it. Anecdotal evidence suggests that Black women may avoid talking about their depression due to feelings of embarrassment, shame, and fear of discriminatory attitudes due to racial stigma.

Moreover, although women of color may be more susceptible to PPD, they are less likely to receive treatment. For example, some studies have found “troubling” racial and ethnic disparities in receiving mental healthcare for postpartum depression: Black women were 57% less likely to start treatment for PPD, and Latinas 41% less likely than white women.

Researchers remain unclear why these disparities occur. Does income explain them? What role does racial bias play in these inequalities?

In an attempt to answer some of these questions, we spoke to Tiffany Green, Ph.D., assistant professor in the Departments of Population Health Sciences and Obstetrics and Gynecology at the University of Wisconsin-Madison.

Prof. Green’s expertise spans health disparities, race, and migration, as well as maternal and child health. Her study, “Pregnancy-Related Weight and Postpartum Depressive Symptoms: Do the Relationships Differ by Race/Ethnicity?” recently appeared in Obstetrics & Gynecology, the journal of the American College of Obstetricians and Gynecologists (ACOG).

MNT: Studies show that women of color are more likely to experience postpartum depression than white women, and some have pointed to low income as a factor mediating this relationship. In your opinion, what are some of the risk factors that explain this association?

One factor may be disproportionate exposure to stress. Recent evidence shows that non-Hispanic Black, Latina, and Native American mothers are more likely to be exposed to clusters of serious stressors, including divorce, homelessness, and intimate partner violence (i.e., ‘toxic stressor landscapes’).

What is interesting but not surprising is that the probability of experiencing toxic stressor landscapes declines with income. Still, that decline is not as steep among non-Hispanic Black and Latina mothers. While the work I just mentioned on toxic stressor landscapes is focused on birth outcomes, we know that many of these particular stressors are linked to postpartum depression among women of color, including Native American mothers.

Many of these stressors also emerge from structural factors, including segregation, lack of access to employment with insurance coverage for behavior health or supply of behavioral health providers, or both.

Within this group, there is a wide spectrum of PPDS prevalence by ethnicity. One study finds that prevalence is lowest among Chinese and Indian mothers and highest among Filipina mothers, and these rates vary among immigrant and U.S.-born mothers. Here again, socioeconomic status doesn’t seem to explain this variation.

Some potential explanations might be stigma related to seeking behavioral health services. Providers may also misinterpret symptoms based on a lack of knowledge of cultural differences, particularly among immigrants.

There’s not a lot of research on discrimination and perinatal depression, but what we do know suggests that self-reported racism might be linked to depression. One intriguing study from New Zealand finds that women of color (e.g., Maori) who reported that a healthcare provider had discriminated against them were more likely to be depressed postpartum. Unfortunately, I don’t know of much work that links discrimination to postpartum depression in the U.S. context, but one could imagine similar patterns occurring here.

MNT: Studies also show that Black and Latina women, in particular, are less likely to receive treatment for postpartum depression. What are some of the socioeconomic factors that explain this? Are there any factors that discourage women of color from seeking medical attention in the first place?

Prof. Green: It’s important to note that postpartum depression is dramatically undertreated among women in general, and among women with fewer resources, in particular (e.g., income and education).

Traditionally, insurance companies have not been as generous with behavioral healthcare coverage relative to physical health. While the Affordable Care Act has made behavioral health services an essential benefit and reduced financial barriers to access, there are still gaps in coverage and issues with access to providers.

That said, while socioeconomic status is certainly correlated with access to treatment, it doesn’t fully explain these disparities. Katy Kozhimmannil has done some great work using a sample of low-income mothers on Medicaid. It finds that even after controlling for clinical factors, non-Hispanic Black and Latina women were less likely to initiate postpartum mental health treatment.

Even among those who began treatment, Black and Latina mothers were less likely to have follow-up visits or refill a prescription (conditional on beginning a course of antidepressants).

There could be a number of reasons for these lower treatment rates, including greater stigma associated with mental health in communities of color, including nativity, English language proficiency, challenges with getting to care in the first place, and lack of patient-provider racial/ethnic concordance.

The latter may be particularly important, given that women of color may want a provider who can understand the unique combination of stressors that they are more likely to face.

Finally, a critical component of this problem is continuous insurance coverage. Black women are disproportionately likely to have their pregnancy and deliveries covered by Medicaid.

However, low-income mothers on Medicaid are removed from the rolls 60 days postpartum if they don’t meet the income criteria for regular Medicaid, which represents a huge disruption in the continuity of care. Given that postpartum depression can crop up or intensify after this period, the lack of postpartum coverage for low-income women is a huge issue.

MNT: Could you tell us more about the role that racial bias plays in identifying cases of postpartum depression? How does it affect the interactions between patients and healthcare professionals, for example?

Prof. Green: To my knowledge, there is not a lot of empirical work specifically examining the role of provider bias in the diagnosis of postpartum depression. I think that much more work needs to be done in this area.

There is some interesting older work from the economics literature that suggests that doctors may not communicate as effectively with Black patients relative to white patients. In turn, this poorer communication affects clinicians’ ability to diagnose Black patients with depression properly.

Further, the evidence strongly suggests that implicit bias (i.e., prejudice) is linked to patient-provider communication, which would be particularly important in diagnosing conditions such as depression. I think that specifically investigating the extent to which these factors matter in the context of postpartum (and prenatal) depression is critical.

How to buy ethically-made clothes without breaking the bank

Prevalence of lung condition more than double WHO figures, students find
Recent Posts
We and our partners use cookies on this site to improve our service, perform analytics, personalize advertising, measure advertising performance, and remember website preferences.Ok