You are here:
Home / Health News / Blue light may be the key to defeating MRSA

Blue light may be the key to defeating MRSA 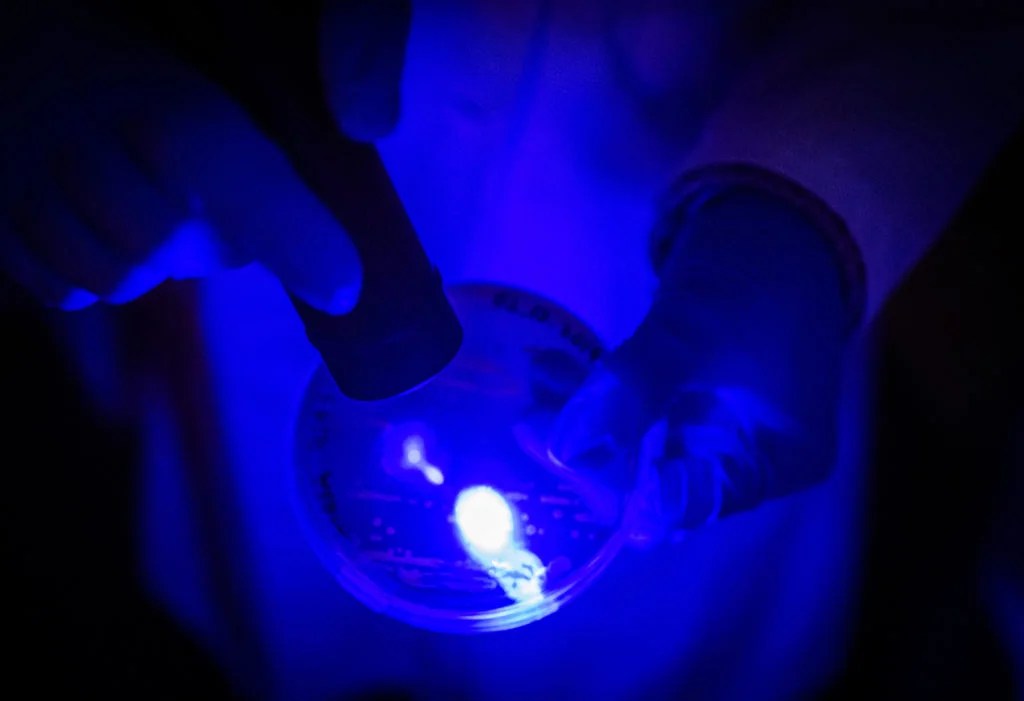 Bacteria are impressively adaptive. Through rapid cell division and via horizontal gene transfer— where they transfer genes with their neighbors — bacteria can quickly strengthen their defenses against threats.

One such threat is antibiotics, and pathogens, such as some bacteria, are rapidly adapting to defeat them.

As these pathogens become resistant to more and more antibiotics, visions of a world in which the drugs on which we depend no longer work have seen scientists racing to come up with some other way to stop infections.

Now, scientists from Boston University’s College of Engineering in Massachusetts have announced success at weakening pathogens by using blue light to attack them on a molecular level.

Prof. Ji-Xin Cheng, from the College of Engineering, says that the “therapy is novel because, instead of using a drug-based approach, it takes physical aim at the structure of the cell itself.”

Prof. Cheng is the senior author of a paper in Advanced Science that now describes the research.

Prof. Cheng and his colleagues happened across blue light’s potential by accident, during experimentation with new optical microscope techniques.

They were using Staphylococcus aureus (S. aureus) as their microscopic subject but soon found it too unstable for their purposes; the microscope’s blue light was bleaching the bacterium’s staphyloxanthin (STX) molecule.

“Golden pigmentation is the universal signature of S. aureus,” says Prof. Cheng. “For imaging purposes, this is bad. But, if it’s bleached, we wondered, is it still alive?”

The team was further surprised, and excited, to learn that their photobleaching ultimately caused their entire S. aureus colony to die. Being able to kill S. aureus is no small thing.

S. aureus is arguably the clearest harbinger of an imminent postantibiotic era.

Methicillin was the first antibiotic to fail against MRSA, and the bacterium has since become extremely difficult to treat with other antibiotics, as well.

According to the Centers for Disease Control and Prevention (CDC), MRSA is responsible for many of the 2.8 million antibiotic resistant infections, and the 35,000 resulting deaths each year in the United States.

Confronted with the unexpected death of S. aureus, Cheng’s team found themselves wondering, “If we bleach [MRSA’s golden pigment], can we kill the [bacterium]?”

The answer to the question turned out to be: “Almost.” It may be enough.

Further study revealed that when the microscope’s blue light photons broke down STX, small openings appeared all over the membranes protecting the MRSA cells, and 90% of the colony died.

However, when dealing with a fast-moving bacterium like MRSA, that is not enough: Within half-an-hour, the cells were dividing again.

According to lead study author Pu-Ting Dong, “MRSA grows back very quickly, so to be effective, we need to kill 99.9% of bacteria.”

For the remaining 10%, Cheng’s team tried something new: After blue light photolysis, which refers to the breakdown of molecules through light, they dosed the cells with hydrogen peroxide, a strong oxidizer that can attack living cells.

The hydrogen peroxide entered the S. aureus cells through the holes in their membranes, causing them to implode. Finally, they had destroyed 99.9% of the S. aureus colony.

Thus, blue light photolysis looks to be the first strike in a one-two punch that can take out antibiotic resistant pathogens.

Since their initial findings in the lab, Cheng and his team have partnered with researchers from Purdue University and Massachusetts General Hospital Wellman Center for Photomedicine in Boston to confirm the effectiveness of their technique on MRSA skin wounds in mice.

Part of what makes blue light photolysis so attractive, as a therapy, is that it does not damage normal cells.

“Using a pulsing blue laser, we can significantly shorten the therapy time and increase the depth of tissues we can effectively treat. The laser light feels painless and doesn’t give off any sensation of heat, ideal for clinical applications.”

Next up for Cheng and colleagues will be the development of a trial for a treatment for people with skin ulcers that diabetes causes.

“If we can treat diabetic ulcers,” he says, “that will change people’s lives. As scientists, we don’t just want to publish papers, we also want to return the fruits of our work and research funding to society.”