You are here:
Home / Health News / Mum discovers new symptoms of her migraines were due to a massive brain tumour 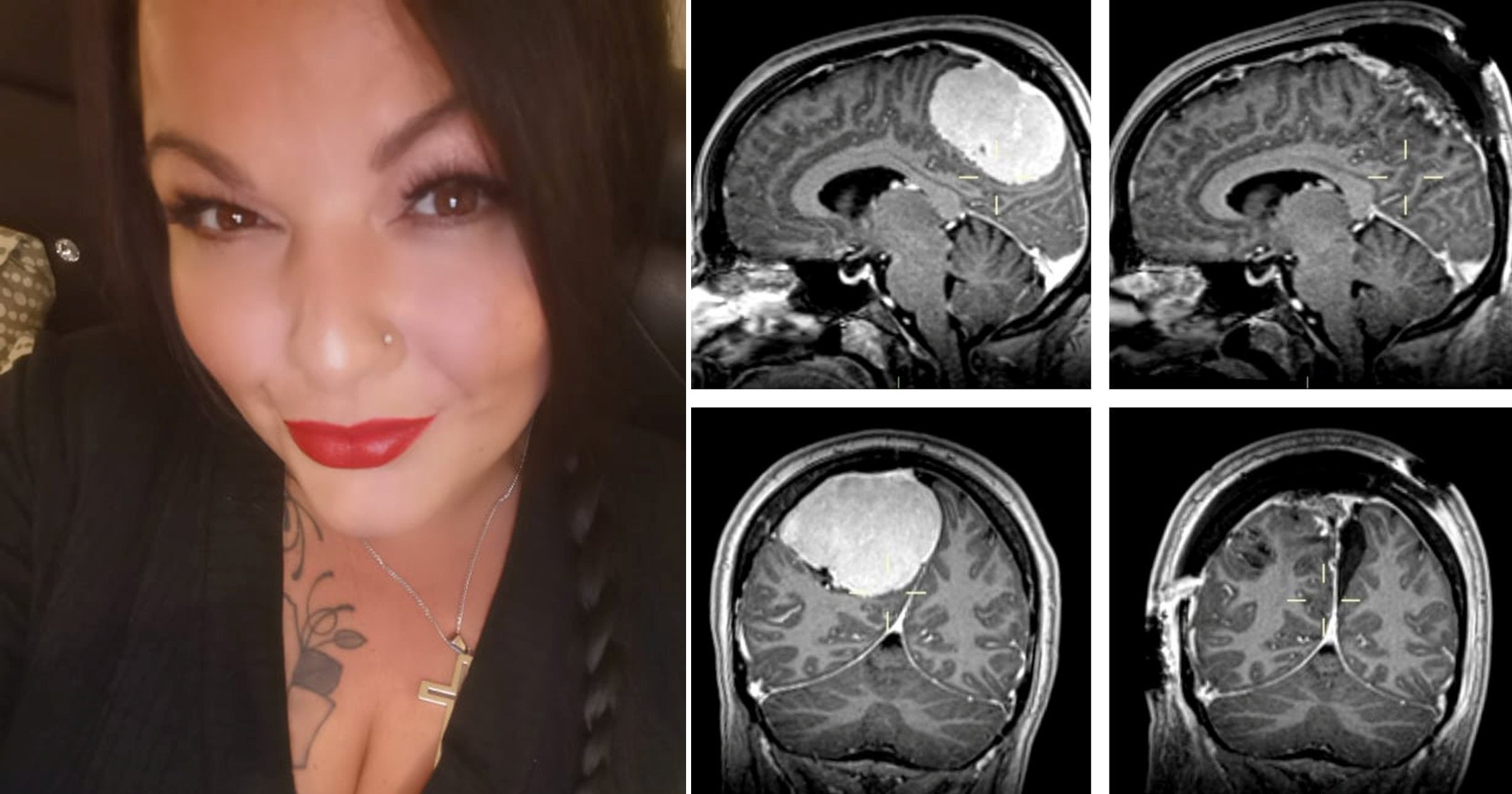 Mum-of-one Lisa Dumbiotis, 38, had suffered from migraines since the age of 15.

But last year, she began to lose feeling in her hands, kept seeing flashing lights, and had dizzy spells.

At first she assumed that these symptoms were just the latest in a long list of migraine-related issues – but her usual medication wasn’t helping one bit.

Lisa’s dad recommended she get an eye test, and when she did, she mentioned her unusual symptoms – and was immediately rushed to Queen Elizabeth Hospital in Glasgow.

CT and MRI scans revealed that the mum had a massive brain tumour – the biggest the operating surgeon had seen at four inches wide.

The tumour was pushing Lisa’s brain to the front of her head, causing pressure and dizziness, but thankfully was not cancerous.

She had to undergo an operation that took nearly 11 hours to remove the mass.

‘My optician mentioned something about intracranial hypertension where I had swelling in the back of my eyeballs – it was putting pressure on them,’ said Lisa.

‘The way that it was growing was actually moving my brain forward.

‘Now that it is gone, there is actually a gap where my brain will move into again.

‘Within three days, I was in theatre undergoing emergency surgery.

‘It was a worry waiting to see if the tumour was cancerous or not as my grandad passed away due to brain cancer.

‘My surgeon is my complete hero and made me feel at ease through it all – he came to visit before I went into theatre and really calmed me.

‘He said that it was the biggest tumour he had ever seen, so he was keen to get it out.

‘I feel as though I owe my life to this man.’

Lisa is now sharing her story to encourage other people suffering from migraines to get checked out if their symptoms change.

She said: ‘You know your migraines and the difference between a migraine and a general headache.

‘When the medication stopped working and I couldn’t use my hands, I knew something was wrong.

‘You need to be aware of what you feel and if it is different than usual, get it checked out.

‘I would advise booking an appointment at the opticians for them to have a look if the pain changes or if you feel different.’

The mum is also doing a sponsored head shave to raise cash for the neuroscience department at the QUEH.

All funds will go towards the neurological endowment fund, which helps with education and equipment purchases.

Lisa said: ‘About four days after my surgery, an amazing nurse came into my ward and took a look at my hair which was tied up in a bun.

‘She started trying to brush through it but it was far too matted, she offered to shave parts of it and I said no – so that’s when I decided I’d be taking the whole lot off.

‘I got home and managed to brush it out but it’s still something I want to go ahead with.

‘I want to do it for the people who helped me.’

You can donate to Lisa’s fundraiser through GoFundMe.