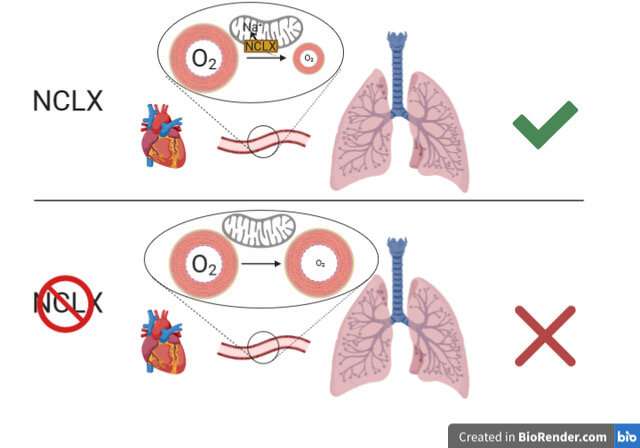 Researchers at the Centro Nacional de Investigaciones Cardiovasculares (CNIC) and the Instituto de Investigación Sanitaria Princesa (IIS Princesa) have made a major advance toward deciphering the mechanism through which the production of reactive oxygen species (ROS) increases in the early phases of hypoxia (acute reduction in tissue oxygen). The finding represents an important advance in the understanding of cell physiology and could be exploited in the future to treat a variety of diseases in which hypoxia plays a role, such as stroke and heart attack.

The study, published today in Nature, is the fruit of a partnership between the groups led by Dr. Antonio Martínez, at Hospital Santa Cristina (part of the IIS Princesa), and Dr. José Antonio Enríquez, at the CNIC. The study was led by Dr. Pablo Hernansanz-Agustín, a postdoctoral researcher at the CNIC.

However, it is now known that when produced in small amounts, these reactive species act as signals that trigger cell adaptations. In this way, continued Dr. Enríquez, “a drop in oxygen concentration triggers the rapid generation of ROS, which initiate the adaptive response of cells to oxygen deficiency.” The 2019 Nobel Prize in Physiology or Medicine was awarded to the scientists who discovered the mechanism by which cells mount a response to sustained hypoxia. This long-term response is mediated by hypoxia-inducible factor (HIF). But the body has other, faster ways to respond to hypoxia that are independent of HIF and are mediated by ROS. The exact mechanism through which ROS production is increased in the early stages of hypoxia is still unclear, but the new study makes an important advance toward defining this process.

“We have shown that sodium ions act as second messengers that regulate mitochondrial function, specifically the function of the mitochondrial electron transport chain (ETC), by inducing the controlled production of ROS,” explained Dr. Hernansanz.

This mechanism of ROS production “is fundamental to the ability of the pulmonary circulation to respond to hypoxia by redistributing blood flow to regions with less irrigation, a phenomenon known as hypoxic pulmonary vasoconstriction,” explained Dr. Martínez.

Several of the study findings provide important information about cell physiology. First, the study shows that mitochondrial sodium regulates cell membrane fluidity. This was unknown before and could have major implications for the understanding of a multitude of cellular processes.

A second important discovery, explained Dr. Enríquez, is that “the mitochondrial supercomplexes of the ETC play an important role in this process by adopting structural conformations that are sensitive or insensitive to sodium, thus ensuring that the action of sodium is nontoxic.”

Dr. Martínez added that the entry of sodium is preceded by the solubilization of calcium deposits inside the mitochondria. These calcium structures were first described more than 50 years ago, but their function was unknown until now.

Dr. Martínez concluded that “the study shows that inhibition of the mitochondrial Ca2+/Na+ exchanger NCLX is sufficient to block this pathway, preventing hypoxia adaptation.” This finding indicates that NCLX could be a future therapeutic target for diseases in which hypoxia plays a role.