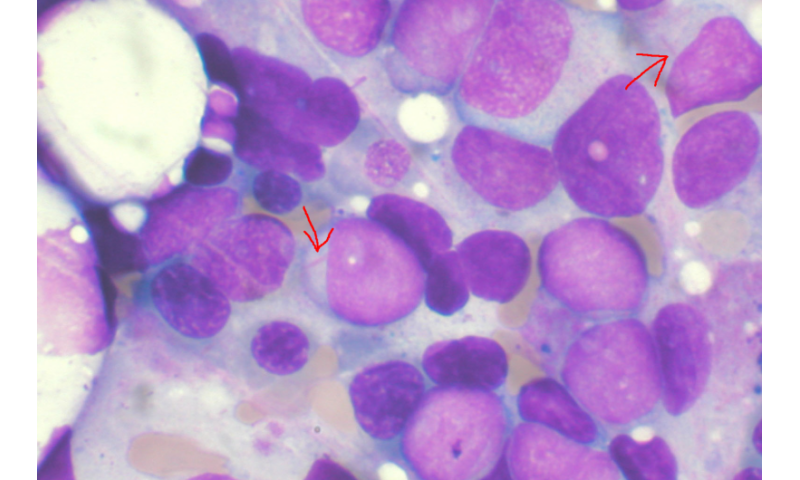 Researchers at Mount Sinai have discovered that human acute myeloid leukemia (AML) stem cells are dependent on a transcription factor known as RUNX1, potentially providing a new therapeutic target to achieve lasting remissions or even cures for a disease in which medical advances have been limited.

In a study published in June in Cell Reports, the team described how they used induced pluripotent stem cells from a patient with AML to recreate leukemia stem cell biology in the lab, revealing that AML leukemia stem cells lose their leukemic properties once the transcription factor is knocked down or deleted. The researchers further showed that AML cells from other patients were RUNX1-dependent.

“Our development of a new leukemia stem cell model for AML allowed us to study these cells in greater detail than ever before, leading to the unexpected finding of specific dependency of leukemia stem cells on the transcription factor RUNX1,” says Eirini Papapetrou, MD, Ph.D., Associate Professor, Oncological Sciences, at Icahn School of Medicine at Mount Sinai, and senior author of the study. “Digging further, we found earlier studies suggesting that RUNX1 expression is a marker of poor prognosis for patients with acute myeloid leukemia. Our work may now provide an explanation, namely that RUNX1 is required to sustain leukemia stem cells and thus propagate the leukemia.”

Acute myeloid leukemia is a cancer of the blood and bone marrow, the spongy tissue inside bones where blood cells are made. AML, which primarily affects white blood cells, is one of the most common leukemias in adults, with more than 20,000 newly diagnosed cases each year in the United States. While several new drugs have been introduced in recent years targeting the disease, they have fallen short of significantly changing patient outcomes or survival.

Dr. Papapetrou was one of the first investigators to derive patient-specific induced pluripotent stem cells and use them in disease modeling, with the goal of better understanding the mechanisms of acute myeloid leukemia and identifying promising new therapeutic targets. Induced pluripotent stem cells, which won their developer the Nobel Prize in 2012, are generated from adult cells and can be differentiated into almost any type of cell type in the body, making them different from and in some ways preferable to embryonic stem cells. Through the use of induced pluripotent stem cells, Dr. Papapetrou and her research team were able to recapitulate a leukemia stem cell state that was difficult to capture and study with traditional models. “Our model made it much easier to isolate and culture leukemia stem cells over a long period, which meant we could obtain them in large numbers for ongoing research,” she explains.

That work uncovered other intriguing genes that appear to play a role in the mediation of RUNX1 effects in leukemia stem cells. Most prominent is TSPAN 18, which scientists believe could prove to be an even more attractive therapeutic target than RUNX1 since, as a cell surface protein, it can be targeted with antibody or chimeric antigen receptor (CAR) T-cell approaches. TSPAN 18 and other candidate genes that lie downstream of RUNX1 could be future subjects of investigation by Dr. Papapetrou’s lab, which is committed to the study of blood disorders, particularly myeloid malignancies.