You are here:
Home / Health News / Manipulating cell death signaling after radiation could offer a new way to treat cancers 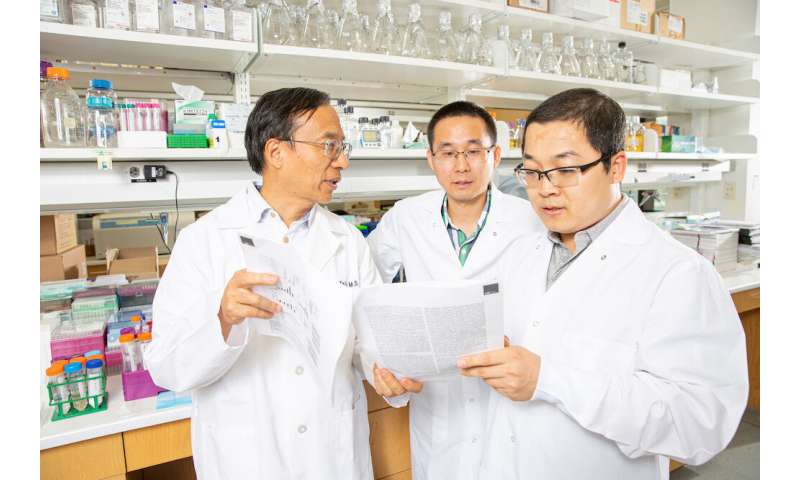 Cancer cells avoid an immune system attack after radiation by commandeering a cell signaling pathway that helps dying cells avoid triggering an immune response, a new study led by UTSW scientists suggests. The findings, published in a recent issue of Nature Immunology, could eventually lead to new ways to augment existing treatments to fight this disease.

Researchers have long known that radiation—a mainstay of treatment protocols for many types of cancerous tumors—kills cancer cells in two different ways: The high-energy beams smite some cells directly, and these dead cells leak DNA that triggers a tumor-fighting immune response through proteins known as interferons (IFNs). But even though cancerous cells make up the vast majority of a tumor, explains study leader Yang-Xin Fu, Ph.D., studies have shown that these cells secrete very little IFN themselves, muting the immune response that could eradicate them.

“We figured that tumor cells must have some mechanism to escape interferon production,” Fu says.

To figure out what that mechanism might be, he and his colleagues tested 42 FDA-approved drugs that block various parts of cell signaling on mouse colon cancer cells growing in petri dishes, searching for any that might be able to prompt these cells to secrete abundant interferons after radiation. Their search identified a drug known as emricasan, often prescribed to liver transplant recipients to help prevent rejection. This drug broadly inhibits production of a family of enzymes known as caspases, which not only help trigger cell death but also muffle the immune system’s response to dying cells.

Further experiments indicated that one particular member of this family known as caspase-9 (CASP9) was key for preventing the cancer cells from secreting IFN. When the researchers genetically manipulated cancer cells to turn off CASP9 production, radiation increased their IFN production thousands-fold compared with “wild type” cancer cells that hadn’t been modified.

When the researchers placed these CASP9-deficient cancer cells into mice, their tumors completely regressed after radiation, compared with those carrying tumors made of wild type cells. Additional experiments showed that a particular population of immune cells, known as CD8+ T cells, were recruited by the secreted interferon and were responsible for this dramatic regression.

Peering deeper into the mechanism behind how CASP9 helps protect tumor cells from the immune system, the researchers looked for the molecular trigger behind the production of this enzyme. Because cells secrete DNA from the nucleus only after they’re dead, the researchers looked to an event that occurs earlier after radiation damage: the secretion of DNA from mitochondria, the cell’s power-generating organelles. When the researchers removed mitochondrial DNA from cancer cells, they no longer produced IFN when they were irradiated, suggesting that this was the triggering event.

Although blocking CASP9 production appears to be a promising way to boost the anti-tumor immune response, it comes with a significant drawback: When tumors in animal models lost CASP9 signaling, these masses found a new way to evade immune attack by stepping up production of a protein called programmed death-ligand 1 (PD-L1), which shields cancer cells from immune discovery. However, when the researchers administered an antibody that blocked PD-L1, the tumors regressed again. Using a combination of CASP9 inhibitors with anti-PD-L1 could offer a new strategy for boosting the effects of radiation, Fu says.