You are here:
Home / Health News / Why are so many new mums getting deadly sepsis?

Why are so many new mums getting deadly sepsis?

Why are so many new mums getting deadly sepsis? As Chloe Delevingne reveals her terrifying experience after giving birth, RACHEL ELLIS examines a growing health menace

By rights, it should have been a time when Chloe Delevingne revelled in the joy of new motherhood. Instead, soon after the birth of son Atticus, now five, and daughter Juno, four, the elder sister of model Cara twice found herself battling deadly sepsis.

‘In the space of one day, you can go from being totally fine to very ill,’ Chloe, 34, said recently of her horrifying experiences.

‘I suffered extreme delirium, and when I was lucid I was completely confused as to what was going on.’

It’s an increasingly common problem. Recent figures revealed that sepsis — an overreaction by the body to an infection that could be triggered by something as trivial as a scratch — is now responsible for more deaths than cancer worldwide. 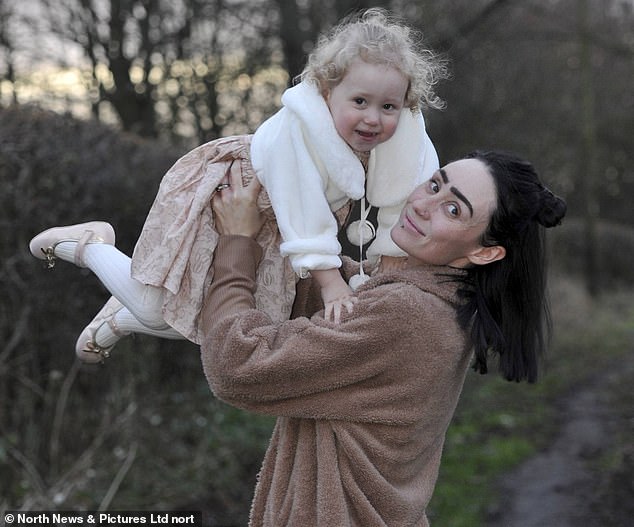 Rebecca Beaty, from Newcastle, who developed sepsis and nearly died while pregnant with her third child Fabelle, who is now aged two

Around 245,000 people develop sepsis in the UK each year and 52,000 die, according to the UK Sepsis Trust. During pregnancy and childbirth, women are more prone to infections so are particularly at risk.

The condition is called maternal or postpartum sepsis when it occurs during pregnancy or within six weeks of giving birth — and it can be fatal for both the mother and baby, or cause long-term effects ranging from fatigue to loss of limbs.

Previously known as childbed fever, maternal sepsis affects around 300 pregnant women a year and kills around nine, making it a leading cause of maternal deaths in the UK.

‘Pregnant women are 50 per cent more likely to develop sepsis than people of a similar age who are not pregnant,’ says Dr Ron Daniels, chief executive of the UK Sepsis Trust. ‘This is because pregnant women are more likely to be entering the healthcare environment, having blood tests and physical examinations, each of which carries a risk of infection.’

Between 2015 and 2017, 20 women died of sepsis during or up to six weeks after pregnancy — 10 per cent of all maternal deaths, according to the latest figures published by the national audit, Mother And Babies: Reducing Risks Through Audits And Confidential Enquiries, carried out by the University of Oxford. 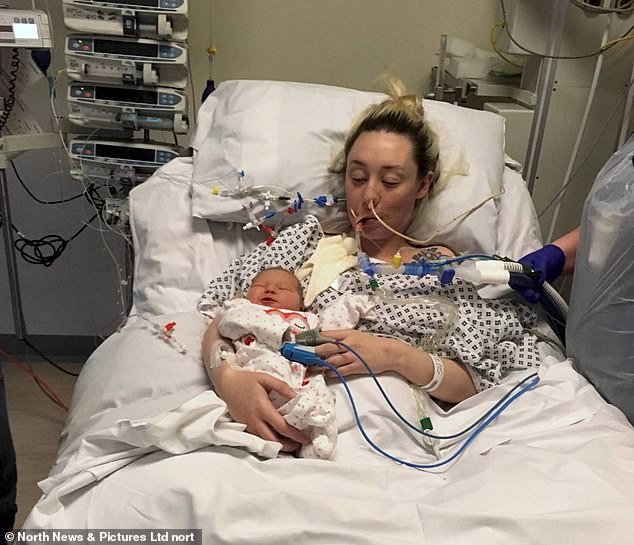 After two days of feeling exhausted, sick and having a cough and a high temperature, Rebecca Beaty went to hospital. Within minutes, doctors discovered her heart rate was dangerously high, while her oxygen levels were very low — signs her body was fighting a serious infection

And the number of pregnant women affected by the condition appears to be increasing, says Dr Daniels, who is also an NHS intensive care consultant.

‘The fact that we are carrying out more tests on women during pregnancy may partly explain why the number of women affected appears to be rising over the past three decades,’ he says.

Other factors include increasing levels of obesity, diabetes and the age at which women are now having children.

Each of these points adds to the risk of complications during pregnancy, including infections which could lead to sepsis, says Dr Daghni Rajasingam, a consultant obstetrician and spokesperson for the Royal College of Obstetrics and Gynaecology.

Sepsis can be triggered by any kind of infection — flu, stomach bugs, wounds or urinary tract infections (UTIs). UTIs are more common in pregnancy because of changes in the immune system.

Symptoms of sepsis include slurred speech or confusion, a cough, extreme shivering or muscle pain, passing no urine in the course of a day, severe breathlessness, mottled or discoloured skin, feeling very unwell and feeling like you are dying — and the condition can progress quickly.

‘Sepsis is a storm where the immune system is trying to do a good job but goes into overdrive,’ says Dr Daniels.

‘Some people go from the first symptoms to being very unwell within a few hours, while for others it will take 48 to 72 hours for the condition to develop.

‘If you have these symptoms during pregnancy, childbirth or in the six weeks after giving birth, seek medical help without delay.’

As symptoms such as shivering or a cough are quite general, diagnosing sepsis can be hard when a woman has recently given birth.

‘Pregnant or postpartum women can appear well until the point of collapse, which can occur with little warning,’ says the 2014 report Saving Lives, Improving Mothers’ Care by the University of Oxford. 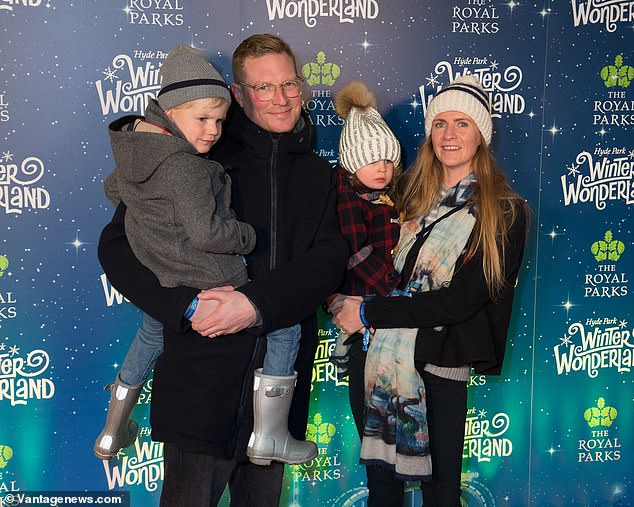 By rights, it should have been a time when Chloe Delevingne revelled in the joy of new motherhood. Instead, soon after the birth of son Atticus, now five, and daughter Juno, four, the elder sister of model Cara twice found herself battling deadly sepsis

If sepsis is diagnosed, patients should be admitted to hospital immediately to be treated with intravenous antibiotics.

‘If left untreated, in the majority of cases, the condition will be fatal,’ says Dr Daniels. ‘But with early treatment, the majority of people will make a good recovery.

‘We hear several times a year of a young family growing up without their mother because of sepsis, and currently there is no way of predicting exactly who is going to deteriorate rapidly and who is in most urgent need of treatment.’

Marian Knight, a professor of maternal and child population health at the University of Oxford who has researched maternal sepsis, warns that doctors should be aware that prescribing antibiotics does not necessarily prevent severe sepsis.

She says: ‘Women who are pregnant or who have recently given birth need to be aware that if they are not getting better after being prescribed antibiotics — for example if they continue to have high fevers, extreme shivering, or pain — they should get further advice from a doctor or midwife urgently.’

In its early stages, sepsis can be mistaken for flu, a chest infection or an upset stomach. The six key signs can be identified by the acronym SEPSIS:

Anyone who thinks they have developed these symptoms should seek medical help urgently — and ask their doctor: ‘Could this be sepsis?’

Once you’ve had postpartum sepsis, you are also more likely to get it again — as Chloe’s experience indicates.

‘We know that people who develop sepsis are more likely to suffer infections for a number of years afterwards, because the immune system has been so challenged,’ says Dr Daniels.

Chloe says the condition has had long-lasting effects on her health.

‘I don’t think I have ever experienced a day of feeling 100 per cent [since],’ she said.

This has also been the experience of Rebecca Beaty, 29, from Newcastle upon Tyne. She started feeling unwell on her due date of her third pregnancy in December 2017. After two days of feeling exhausted, sick and having a cough and a high temperature, she went to hospital.

Within minutes, doctors discovered her heart rate was dangerously high, while her oxygen levels were very low — signs her body was fighting a serious infection.

‘I had taken one of our children home — I was gone for less than an hour — and when I came back Rebecca was in a coma and the baby had been delivered by Caesarean section,’ recalls her partner, Paul, 37, who works in a children’s home.

‘Rebecca’s body had shut the placenta off because she was essentially dying. She had pneumonia in both lungs, her liver, kidneys and heart were starting to fail and she was so weak they didn’t think she would make it through the night. It was scary.’

Rebecca spent two days in a coma and three more in hospital, while baby Fabelle was given antibiotics as a precaution. Rebecca was told the sepsis was likely triggered by numerous bugs she’d had, coupled with the strain pregnancy had put on her immune system.

‘If Rebecca hadn’t been in hospital, we would have lost both of them,’ says Paul. ‘It’s been really hard for all the family.’ For the next six months, Rebecca, a care worker, barely left home and her immune system is now ‘like that of a pensioner’ — she picks up every bug going.

‘It was the most horrendous experience of my life,’ she says.

Although pregnant women are more likely to develop sepsis, it is less likely to be fatal.

‘Women’s bodies adapt to prepare for the trauma of childbirth, with changes in the heart, breathing and immune system, meaning the body is better prepared to deal with any stress, including severe infection and sepsis,’ says Dr Daniels.

Yet around one in ten women with sepsis will lose their baby through miscarriage, going into labour early or stillbirth.

Good Health has been running the End The Sepsis Scandal campaign to raise awareness of the condition. Pregnant women are now warned of the signs in both mother and child

Dr Daniels adds: ‘Pregnant women need to be aware of the symptoms, be prepared to ask health professionals to reassure them that they don’t have sepsis, and ensure that they take up flu vaccinations to prevent infections developing.’

Related posts:
Tags: are deadly getting many mums new sepsis? so why
SHARE ON SOCIAL MEDIA
RELATED NEWS