You are here:
Home / Health News / When Chloe fell backwards, she had no idea what she’d really lost

When Chloe fell backwards, she had no idea what she’d really lost

Five years ago, Chloe Donovan was at work when she fainted, falling backwards onto concrete.

Later that day in the hospital, after receiving stitches to the back on her head, she was offered a toasted cheese sandwich. She took one bite and put it back down, uninterested. She did not yet know her olfactory nerve had been damaged when she fell. 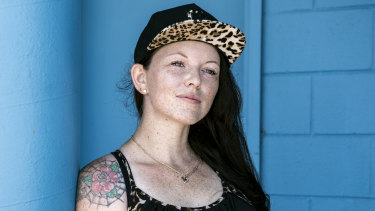 Chloe Donovan is among the 1 in 20 who live with anosmia, meaning they have lost their sense of smell.Credit:Steven Siewert

It was during the next two days that she noticed she could no longer smell the soap in the shower or the deodorant that she sprayed. “I thought something is not right here,” says the 31-year-old Sydneysider.

As smell plays a dominant role in taste, Donovan also quickly discovered her lack of interest in the cheese sandwich now extended to all food.

“It’s like eating a box of tissues,” she explains. “You only get texture and temperature.”

Donovan is among the estimated one in 20 people who live without smell as a result of injury, infection, certain medications, age or medical conditions including Alzheimer’s disease, Parkinson’s disease, multiple sclerosis or hormonal disturbances.

Smells link us to people, places and emotional experiences. People who have lost (it) miss out on all those memories smell can evoke.

“The most common cause of smell loss is chronic rhinosinusitis which affects about 10 per cent of the population,” said Professor Carl Philpott, from UEA's Norwich Medical School. “In this case, smell loss can be reversed in most cases in response to treatment … other causes have less likelihood of reversibility and treatments are lacking.”

Until now there has been little research into the range of emotional and practical impacts of anosmia, as lack of smell is known. Philpott explains “it is overlooked because it’s the invisible sense and because there are no aids for when it’s gone”.

So along with his team, Philpott conducted a qualitative review, published this week in the journal Clinical Otolaryngology, to better understand people’s experiences.

The study found that the inability to smell affects almost every aspect of life, from worrying about personal hygiene to a loss of sexual intimacy and the break-down of personal relationships.

“Smell is a hazard warning system and a dimension that enriches our existence – it stops us poisoning ourselves and connects us to the world around us in a very subconscious way,” Philpott said.

Donovan says she once “nearly set my kitchen on fire” when she accidentally turned the toaster on while putting groceries down on the kitchen counter.

It was only after her son got home from school and smelt something burning that they discovered a blackened loaf of bread on top of the toaster.

Like Donovan, most of the participants in the study no longer enjoyed eating or preparing food which, they said had negatively impacted their social lives.

Participants expressed distress that they struggled to bond with their partners or babies because they could not detect their scent.

“The inability to link smells to happy memories was also a problem,” Philpott said. “Smells link us to people, places and emotional experiences. And people who have lost their sense of smell miss out on all those memories that smell can evoke.”

Many of the participants expressed distress that they struggled to bond with their partners or babies because they could not detect their scent.

“I feel I live in a world behind glass, because I cannot smell and taste anything and feel depressed and sad much like being bereaved,” one of the 71 participants revealed.

And despite being strict about personal hygiene, others noted that they always felt anxious if someone mentioned smells around them: “After all how do I know it’s not coming from me?” a participant said.

The sense of disconnection with the world around them leads to high rates of negative emotions among those with anosmia.

A recent study done in the UK exposed high rates of depression (43%) and anxiety (45%) among the anosmic population, as well as problems with eating (92%), isolation (57%), and relationship difficulties (54%).

“It has been extremely hard to adjust to life and after five years in am still struggling emotionally,” admits Donovan, whose smell and taste has not returned and who runs the Anosmia support group Australia Facebook page. “Never could I contemplate how important these senses were until they were lost.”