You are here:
Home / Health News / Three ways RNA is being used in the next generation of medical treatment 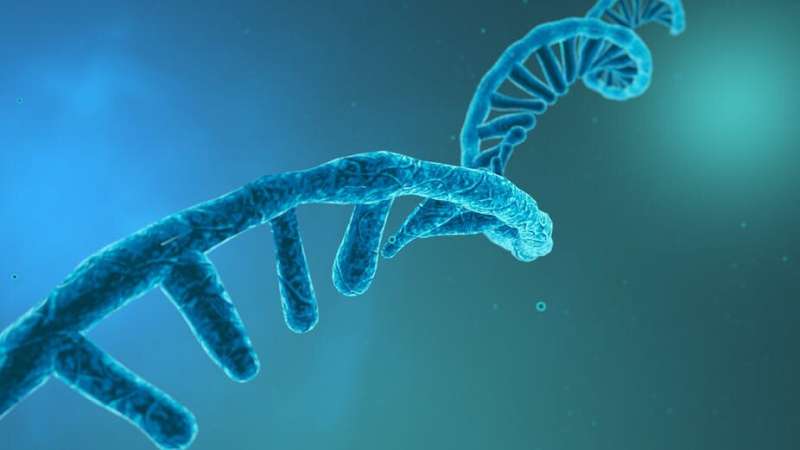 You might have heard the term “RNA” recently thanks to the development of the Pfizer and Moderna mRNA vaccines, which protect against COVID-19. But the potential medical uses of RNA molecules go much further than vaccines.

RNAs, or ribonucleic acids, are some of the most important molecules for life on this planet. RNA is found in every cell in the body, and plays an important role in the flow of genetic information.

“Messenger” RNAs (mRNAs) copy and carry the genetic instructions from our DNA to the protein-making factories of our cells (ribosomes), which can then create the biological components and machinery they need to work. For example, actin proteins give cells their shape and structure and are crucial to muscle contraction.

RNA also help other biomolecules find each other, and help bring other proteins and RNAs together. These functions are crucial in managing the many levels of gene regulation, which is itself important for proper functioning of the body.

RNA’s wide range of capabilities, as well as having a simple molecular sequence that can easily be read by researchers, has made it an extremely useful tool in the development of recent biomedical technologies—including CRISPR gene editing.

Here are three other fields where RNA is being investigated.

The mRNA vaccines that are used to protect against SARS-CoV-2 (the virus that causes COVID-19) are the first of their kind to be licensed for widespread human use.

But studies and clinical trials on RNA vaccines for other viruses—and even cancers—have been going on for a decade. These types of vaccines introduce a specific RNA sequence into the body, which causes the body’s ribosomes to create a specific, harmless viral protein. In turn, this trains the immune system to respond in such a way that produces strong protection against this virus the next time it encounters it.

This is unlike conventional vaccines, which require either a harmless, inactive form of a virus, or small proteins or protein fragments made by a virus, to train the immune system. Designing and synthesizing an RNA sequence that provides the body with instructions is also easily and quickly done.

But one of the biggest hurdles in making effective RNA-based drugs has been the relative instability of the molecules. These degrade rapidly when exposed to certain common enzymes and chemicals, so need to be kept at very low temperatures—in some cases below -70℃, as required for the Pfizer vaccine.

RNA is also playing an expanding role in diagnostics. Research into liquid biopsies (which only require a sample of human body fluids, such as blood) have increasingly shown that by measuring levels of particular RNAs, many diseases can be diagnosed at an earlier stage—including cancers, neurodegenerative diseases and cardiovascular disease.

Combinations of RNA biomarkers can also be simultaneously evaluated, allowing not only more confidence in a diagnosis, but even predictions of disease progression and prognosis. Large-scale studies that test the clinical suitability of these types of diagnostic tools are still needed however.

RNA is also being used to help develop new drugs.

Drugs that target RNA can be identified, and in some instances customized, because researchers can sample RNA interactions and sequences linked to many different diseases from readily available databases. So far, drugs that target RNA have provided great promise in the treatment of very rare diseases, which previously lacked effective, existing treatments—such as Huntington’s disease.

Drugs are also being designed which can target RNAs and modify or inhibit the function of certain genes or protein production—including those responsible for many diseases and symptoms. Several of these have now been used to successfully treat viruses, neurodegenerative diseases, and even in personalized medicine (treatments designed specifically for that patient).

RNA interference drugs are another area of research. These drugs silence a specific gene to treat a condition. Research into these types of drugs is currently underway for many conditions, including amyloidosis (a rare disease caused by a buildup of proteins in the body), acute hepatic porphyria (a rare metabolic disorder), and several cancers (including lung cancer).

More recently, certain groups of RNAs and proteins have been shown to change the sensitivity of diseases (particularly cancers) to treatment. This has made some cancers less resistant to conventional treatment as a result. This could potentially provide a valuable new combination therapy for hard to treat diseases.

Related posts:
Tags: being Generation in is medical next of RNA The three treatment used ways
SHARE ON SOCIAL MEDIA
RELATED NEWS