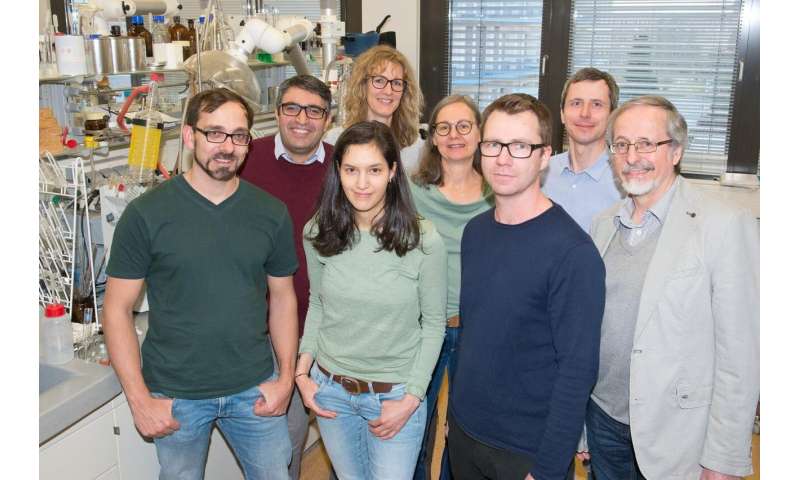 Radiolabeled molecules, so-called radiotracers, help nuclear physicians to detect and precisely target tumors, which often develop due to pathological changes in metabolic processes. Using positron emission tomography, a team of scientists at Helmholtz-Zentrum Dresden-Rossendorf (HZDR) has now developed the first radiotracer labelled with the fluorine isotope 18F, which can visualize special transport proteins often found in the cell membranes of cancer cells. The researchers opted for an unusual radiochemical synthesis approach, as they describe in the journal Scientific Reports.

During metabolism, malignant tumors generate increased amounts of a certain type of transport protein, which, for example, transports the intermediate metabolic product, lactate, into certain tumor cells while simultaneously exporting it away from others—a strategy to prevent apoptosis, a form of programmed cell death that would kill the tumor in a healthy metabolism.

“This correlation has been observed in a variety of tumor types. For this reason, so-called monocarboxylate transporters are considered as key proteins for treating a broad spectrum of different kinds of cancer. Manipulating them can lead to a successful therapy,” explains Prof. Peter Brust. He is the head of the Department of Neuroradiopharmaceuticals at the HZDR research site in Leipzig and works on current radiopharmaceutical topics with a focus on brain research. “This includes the synthetic development of modern radiotracers, which play a special role in battling cancer and, in particular, aggressive brain tumors,” says Peter Brust, outlining his team’s mission.

In molecular-biological and preclinical studies, scientists had already tried to block the activity of monocarboxylate transporters (MCT) by using certain small organic molecules with a pronounced inhibitory effect (for example, α-CHC). Initial results showed that interrupting lactate flow can be a highly effective therapeutic strategy to stunt the growth of malignant tumors. 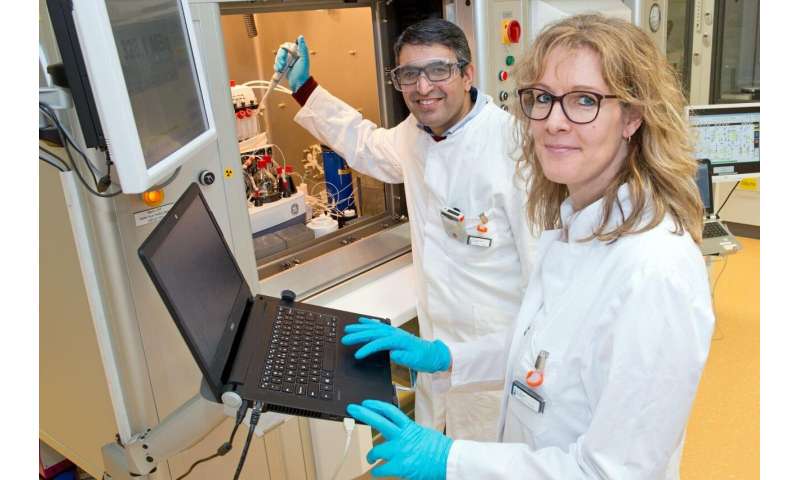 In addition to its therapeutic interest, the metabolic function of MCT also opens up new diagnostic possibilities: They can be used as valuable biomarkers in many types of cancer, for example by using positron emission tomography (PET). This method uses radionuclides emitting positively charged elementary particles, called positrons. The patient is first given a radiopharmaceutical, a molecule coupled with a radioactive atom such as 18F, which emits positrons. As a positron interacts with an electron in the body, radiation is emitted in diametrically opposed directions in the form of two high-energy photons, which are recorded by detectors arranged in a ring around the patient. This image of the metabolic processes allows physicians to draw conclusions about the spatial distribution of the radiopharmaceutical inside the body, and thus, about any pathological changes.

Despite their potential as therapeutic target structures in the fight against cancer, hardly any radiolabeled MCT inhibitors have recently been studied to gauge their suitability in diagnostic imaging procedures such as PET. “We have now developed a structural analog of the known MCT inhibitor α-CHC and successfully coupled it with the PET radionuclide 18F in a complex procedure. Its relatively short half-life of 110 minutes ensures that the patient can tolerate the radiation exposure,” says Dr. Masoud Sadeghzadeh, who coordinated the experiments, describing the approach used by the Leipzig chemists.

After conducting the first promising preclinical studies of their new compound [18F]FACH, the scientists revised their synthetic pathway. “The challenge is to produce the radiotracer fast enough so we can harness the radiating properties of 18F in practical applications,” radiochemist Dr. Barbara Wenzel explains. The timespan during which the radiotracer is usable is determined by the half-life of the radionuclide. While the chemists initially needed 160 minutes to manually produce the new radiotracer, they were now able to reduce the synthesis time by half by modifying their approach.