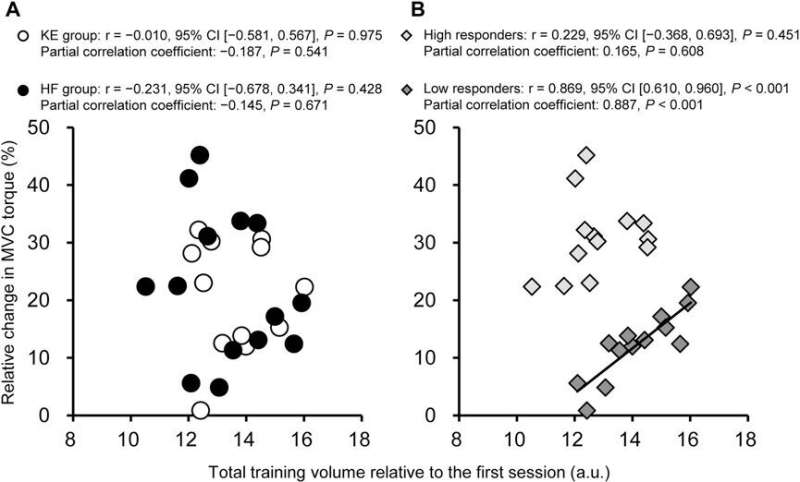 Exercise plays a significant role in training, rehabilitation, and a healthy lifestyle. These activities require different regimens based on the desired outcomes. For instance, unlike a senior citizen, an athlete can undertake a demanding exercise routine. An appropriate training program design should, therefore, be based on identifying and analyzing factors affecting individual training.

Previous research has shown that high-intensity isometric training results in greater strength improvements compared to low-intensity isometric training. However, a recent study has suggested that strength gain depends primarily on the total training volume. Training volume is defined as the product of the percentage of maximal voluntary contraction (MVC), the duration of contraction per set, and the number of sets per session.

Notably, the above conclusion is based on the group average response. However, interindividual variables like temporal strength changes and fatigue resistance also affect the actual training volume. Therefore, it should equal the total impulse given by the areas under force-time training curves.

In this vein, researchers from Japan, including Prof. Ryota Akagi of the Shibaura Institute of Technology (SIT) and Dr. Ryoichi Ema from Shizuoka Sangyo University, examined, in a recent study, the relationship between interindividual variability in strength changes and training volume. “In our study, we compared the strength gains of muscle groups with different joint actions to resolve the inconsistencies in the existing research literature,” says Prof. Akagi.

Their work was published in the journal Frontiers in Physiology.

The participants were made to exert maximum force as fast and hard as possible. Their efforts in each session, i.e., the training volumes, were estimated by calculating the areas under the time-torque curve of 40 contractions. In addition, the researchers assessed changes in the maximal voluntary contraction (MVC) torque (the peak value of each contraction) during KE and HF for the participants.

They found that the torque increased significantly in the KE and HF groups. Moreover, the corresponding MVC torque changes, training volume, and time course changes in total impulse were similar for both groups.

Next, the researchers further analyzed the collected data by subdividing the participants in each group into high and low responders based on the decreasing magnitude of MVC torque changes. The low responders had significantly higher baseline torque and training volume. They also had a faster and higher increase in the latter parameter. Moreover, the total volume was positively correlated with MVC torque changes, indicative of strength gain, in their case. Among the high responders, this correlation was observed only for the first week.

Finally, the responders showed no significant association between baseline strength and strength gain. The baseline determined only the training response of the participant (above or below average) in the training group.

The study, thus, establishes an association between total training volume and the magnitude of strength gains in the low responders. It suggests that the training volume may determine individual adaptation in participants with a relatively high strength-to-weight ratio a priori.

The findings are applicable for athletes so that trainers could assess their training responses by investigating the strength-to-weight ratio at the baseline and the increase in training volume from the first session to the middle of training. The presented isometric resistance regimen can improve the MVC strength by approximately 20% regardless of joint actions.

“Improvement of muscular strength is important for maintaining good health and enjoying sports activities. In this regard, our work will contribute to developing effective and individual training regimens for everyone,” concludes Prof. Akagi.