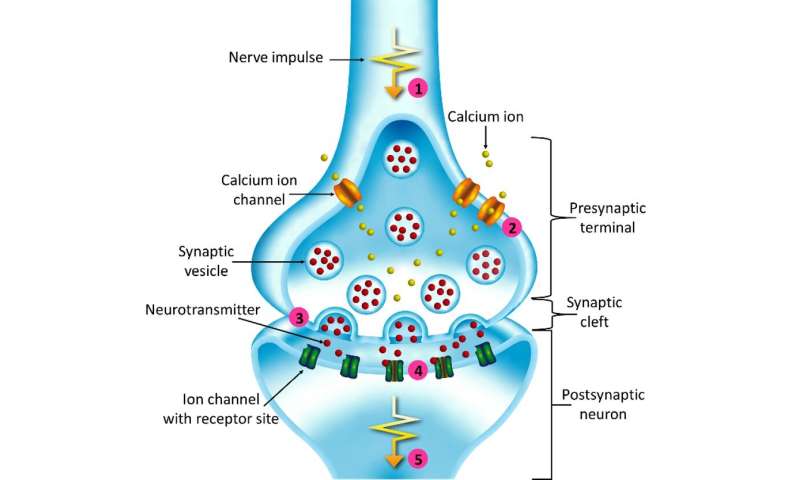 Hailed as one of the most important medical advances, the discovery of general anesthetics—compounds that induce unconsciousness, prevent control of movement and block pain—helped transform dangerous and traumatic operations into safe and routine surgery. But despite their importance, scientists still don’t understand exactly how general anesthetics work.

Now, in a study recently published in the Journal of Neuroscience, researchers from the Okinawa Institute of Science and Technology Graduate University (OIST) and Nagoya University have revealed how a commonly used general anesthetic called isoflurane weakens the transmission of electrical signals between neurons, at junctions called synapses.

“Importantly, we found that isoflurane did not block the transmission of all electrical signals equally; the anesthetic had the strongest effect on higher frequency impulses that are required for functions such as cognition or movement, whilst it had minimal effect on low frequency impulses that control life-supporting functions, such as breathing,” said Professor Tomoyuki Takahashi, who leads the Cellular and Molecular Synaptic Function (CMSF) Unit at OIST. “This explains how isoflurane is able to cause anesthesia, by preferentially blocking the high frequency signals.”

The CMSF unit used rat brain slices to study a giant synapse called the calyx of Held. The scientists induced electrical signals at different frequencies and then detected the action potentials generated in the postsynaptic neuron. They found that as they increased the frequency of electrical signals, isoflurane had a stronger effect on blocking transmission.

To corroborate his unit’s findings, Takahashi reached out to Dr. Takayuki Yamashita, a researcher from Nagoya University who conducted experiments on synapses, called cortico-cortical synapses, in the brains of living mice.

“These experiments both confirmed how isoflurane acts as a general anesthetic,” said Takahashi. “But we wanted to understand what underlying mechanisms isoflurane targets to weaken synapses in this frequency-dependent manner.”

Tracking down the targets 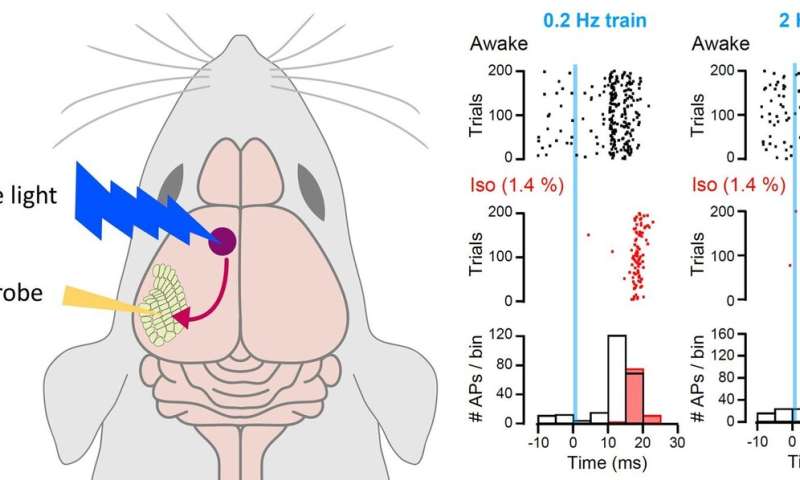 With further research, the researchers found that isoflurane reduced the amount of neurotransmitter released, by both lowering the probability of the vesicles being released and by reducing the maximum number of vesicles able to be released at a time.

“However, this mechanism alone could not explain how isoflurane reduces the number of releasable vesicles, or the frequency-dependent nature of isoflurane’s effect,” said Takahashi.

The scientists hypothesized that isoflurane could reduce the number of releasable vesicles by either directly blocking the process of vesicle release by exocytosis, or by indirectly blocking vesicle recycling, where vesicles are reformed by endocytosis and then refilled with neurotransmitter, ready to be released again.

By electrically measuring the changes in the surface area of the presynaptic terminal membrane, which is increased by exocytosis and decreased by endocytosis, the scientists concluded that isoflurane only affected vesicle release by exocytosis, likely by blocking exocytic machinery.

The scientists proposed that high frequency action potentials trigger such a massive influx of calcium into the presynaptic terminal that isoflurane cannot effectively reduce the calcium concentration. Synaptic strength is therefore weakened predominantly by the direct block of exocytic machinery rather than a reduced probability of vesicle release.

Meanwhile, low frequency impulses trigger less exocytosis, so isoflurane’s block on exocytic machinery has little effect. Although isoflurane effectively reduces entry of calcium into the presynaptic terminal, lowering the probability of vesicle release, by itself, is not powerful enough to block postsynaptic action potentials at the calyx of Held and has only a minor effect in cortico-cortical synapses. Low frequency transmission is therefore maintained.

Overall, the series of experiments provide compelling evidence to how isoflurane weakens synapses to induce anesthesia.