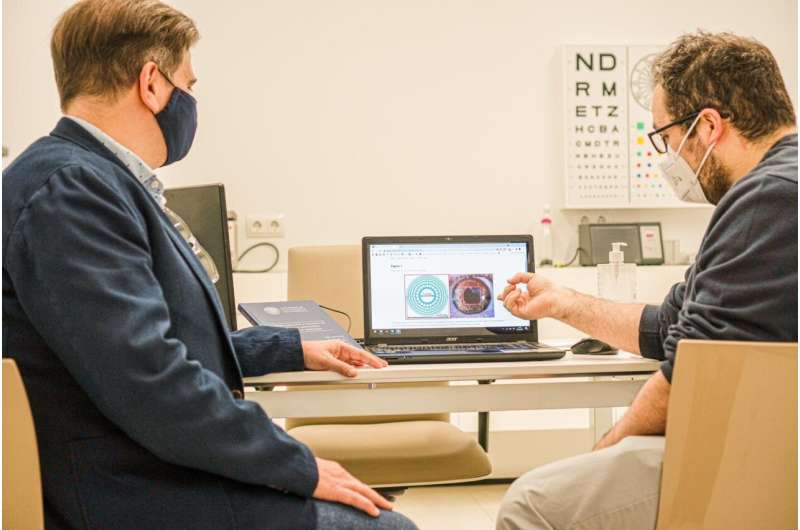 A team from the Universitat Politècnica de València (UPV), the Universitat de València (UV) and the Aiken Ophthalmic Clinic (through its Research Foundation) have designed and assessed in their laboratories a new groundbreaking implant, the only one of its kind, to correct presbyopia. As a result of the work of five years of research, they have created the first trifocal corneal inlay that is also fully transparent. Such an inlay would allow good eyesight to presbyopic people of objects located at several distances: far, intermediate (computer, mobile devices) and near. Their work has been published in Nature group’s Scientific Reports journal.

“This inlay could be an alternative for those suffering from presbyopia who would rather not use glasses or contact lenses. Furthermore, it would be fully compatible with laser refractive surgery in myopic and hyperopic patients, as well as possible subsequent cataract interventions. We are suggesting something totally new that is also not incompatible with any other ocular therapy,” highlights Juan Antonio Monsoriu, researcher at the Centre for Physical Technologies of the Universitat Politècnica de València.

In this sense, Dr. Salvador García-Delpech, from the Aiken Foundation points out that this inlay, unlike others that currently exist, would not prevent subsequent study of the retina or macula and even surgical interventions as the case may be.

He also adds that at this time, screens, mobile phones, electronic devices… have become a basic need in our everyday lives, and the number of patients who request to stop using glasses in their daily life is increasing. “Let’s also take into account the face mask effect: many people cannot perform their job with foggy glasses due to the use of face masks and come looking for a practical solution to this problem,” adds García-Delpech, referring to changes to which the population is being subjected in this “new normal.”

The inlay consists of a diffractive lens made of a biocompatible material, “It is extremely thin—less than 5 microns—so it would be inlayed inside the stroma of the cornea, basically without affecting its structure, in a cavity created with a femtosecond laser. The lens is micro-perforated, which allows the flow of necessary nutrients in this part of the cornea,” explains Walter D. Furlan, researcher at the Department of Optics and Optometry and Vision Sciences at the University of Valencia. But, the main novelty of the researchers’ work goes further, as it is the first totally transparent diffractive inlay.

Another characteristic that differentiates it from current inlays is that the area where the nutrients flow is greater. “This would reduce the chances of rejection once inlayed in the cornea of the patient,” highlights Vicente Ferrando, also a researcher at the Center for Physical Technologies of the Universitat Politècnica de València.

In addition, some of its design parameters may be adapted, which opens a new option for the treatment of presbyopia, with the development of fully customized trifocal corneal inlays, that is: tailored to each patient.

It overcomes all the drawbacks of current corneal inlays

Until now, the treatment for presbyopia has been through the use of glasses, bifocal and progressive contact lenses. There are multifocal intraocular lenses that generally replace the crystalline lens of the eye and intra-corneal inlays for surgical treatments. In the latter case, currently, according to the researchers, there are two types: small-aperture inlays and refractive inlays. “The first type produce an extension of the depth of focus with which intermediate vision is gained but their luminous efficiency, since it is partially opaque, is low. The second type achieve bifocality, so it has a good performance for nearsighted and farsighted individuals, although it loses quality at intermediate distances. Our design, according to the tests we have developed, overcomes all these handicaps,” highlights Juan Antonio Monsoriu.

In these tests, the UPV and UV team demonstrated the viability of this pioneering trifocal intracorneal inlay design. To do this, they assessed its optical quality by comparing it with another model currently used in clinical practice, first numerically with commercial software and then experimentally in an artificial eye using an adaptive optics based visual simulator.

These trials are part of Diego Montagud Martínez’s doctoral thesis, recently presented at the UPV.