You are here:
Home / Health News / Red Blood Cells Made to Deliver Antibiotics to Bacteria

Red Blood Cells Made to Deliver Antibiotics to Bacteria

Over several years, “we developed experimental and computational techniques to study how proteins and drugs interact with membranes,” Hannah Krivić, PhD, a graduate student, and Maikel C. Rheinstädter, PhD, a professor of physics, both at McMaster University in Hamilton, Ontario, Canada, told Medscape Medical News. 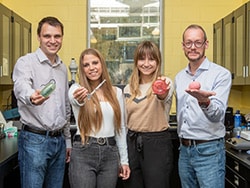 In earlier work, these researchers investigated how antibiotics target bacterial membranes and how those membranes enable the development of antibiotic resistance. Then, they said, “we started to … manipulate membranes by tuning their properties [with] synthetic lipid molecules to create ‘hybrid’ membranes — ie, functionalized biological membranes with optimized properties.

“We are now using this approach to functionalize red blood cells by using them as drug carriers. We optimize these cells to carry certain loads, such as drug molecules, and anchor proteins in their membranes that target receptors in bacteria to selectively and efficiently deliver that load.”

The strategy, they said, “has become a universal red blood cell–based delivery platform that we call ‘smart blood’ … that can safely and selectively deliver antibiotics to certain bacterial targets.”

The platform currently is being tested in vitro, and in vivo testing is slated to begin in early 2023. Their study was published online September 29 in ACS Infectious Diseases.

Polymyxin B (PmB) is one of a few potent antibiotics with promising efficacy against drug-resistant bacteria such as E coli. PmB, however, is widely considered a treatment of last resort because of its toxic side effects (which include nephrotoxicity, neurotoxicity, and neuromuscular blockade) particularly at higher doses.

The researchers hypothesized that targeted delivery of PmB might lead to optimized dosing and potentially reduce the need for higher or repeated doses. In the current study, they tested the ability of the smart blood platform to deliver PmB to E coli.

Creating “erythro-PmBs” involves removing the inner components of red blood cells, loading the cells with PmB, and coating the cell membranes (liposomes) with antibacterial (in this case, anti-E coli) antibodies.

The in vitro experiments showed that the cells could be loaded with PmB and retain and selectively deliver the drug to E coli, with no apparent hemolytic activity or nephrotoxicity. Specifically, the erythro-PmBs had a loading efficiency of approximately 90% and delivered PmB to E coli with values for the minimum inhibitory concentration (MIC) that were comparable to those of free PmB.

“In contrast to drug-delivery systems based on synthetic carriers, our erythrocytes have a high biocompatibility and can stay in circulation in the body for several weeks to provide a sustained and targeted release of the drug,” said Krivić and Rheinstädter. “This [profile] can make existing drugs safer by, for instance, increasing their efficacy while at the same time lowering the required dosage, thereby reducing side effects.”

The researchers are now exploring the ability of the smart blood platform to deliver neurotrophic factors across the blood-brain barrier to potentially treat neurodegenerative diseases. Their approach is identical to that used in the current study, they said, except in this case, the red blood cell membranes are designed to deliver neurotrophic factors specifically to the blood-brain barrier.

David W. Deamer, PhD, research professor of biomolecular engineering at the University of California, Santa Cruz, commented on the study for Medscape Medical News. “This is certainly promising. The erythro-PmBs have a greater loading capacity and longer circulation time than ordinary liposomes used for drug delivery. They can also be prepared with specific antibodies so that the antibiotic is delivered more directly when they bind to bacterial pathogens.”

The effect on bacterial growth, however, was tested in a model system, not in an actual infection, he said, adding that an important next step will be to perform animal testing. “One of the simplest tests is induced sepsis in mice, which mimics a burst appendix. If the erythro-PmBs can treat sepsis effectively, it will be an encouraging sign that they have potential therapeutic value. It will also be interesting to see whether the antigens responsible for ABO blood groups are retained on the surfaces of the erythro-PmBs. If they are, it might be necessary to match donor blood to that of the recipient.

“Getting a product ready for clinical use will require partnership with a major pharmaceutical firm, several years of animal testing, and then several more years carrying out phase 1, 2, and 3 clinical trials in human patients,” Deamer concluded.

No commercial funding was disclosed. Krivić, Rheinstädter, and Deamer reported no conflicts of interest.

New method to detect oxygen consumption in the brain

What Is the Genetic Influence on the Severity of COVID 19?
Recent Posts