You are here:
Home / Health News / Ovary removal before menopause could raise a woman’s odds for Parkinson’s 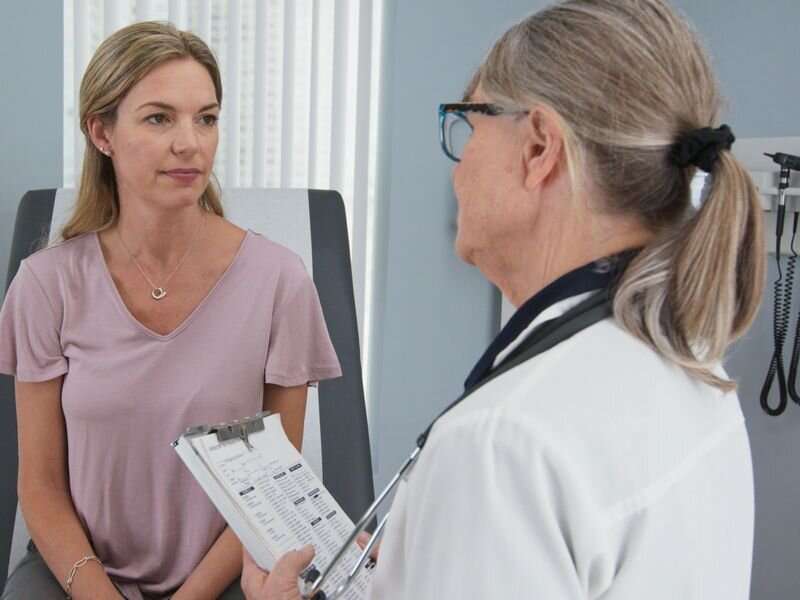 Women who have both ovaries removed before menopause may have a heightened risk of developing Parkinson’s disease years later, a new study suggests.

Looking at decades of data on more than 5,000 women, researchers found that those who had both ovaries removed before age 43 were five times more likely to eventually be diagnosed with Parkinson’s disease, versus women their age who did not have the surgery.

Experts said the results do not prove the surgery causes Parkinson’s. But they are in line with some past studies—and they support the theory that premature estrogen loss might contribute to Parkinson’s in some women.

Parkinson’s disease affects nearly 1 million people in the United States, according to the Parkinson’s Foundation.

It is a brain disease that over time destroys or disables cells that produce dopamine, a chemical that helps regulate movement and emotional responses.

The most visible symptoms of Parkinson’s are movement-related—tremors, stiff limbs and coordination problems—but the effects are wide-ranging and include depression, irritability, and trouble with memory and thinking skills.

Parkinson’s disease is roughly twice as common in men than women. That suggests there could be a protective effect of estrogen on dopamine-producing cells, according to Dr. Walter Rocca, the lead researcher on the new study and a neurologist at the Mayo Clinic in Rochester, Minn.

The ovaries are the main source of estrogen in a woman’s body. If a woman has both ovaries removed before menopause, she will have an abrupt drop in estrogen. And that, Rocca said, may mean a loss of the hormone’s protective effects in the brain.

Some past research has linked bilateral oophorectomy—the surgical removal of both ovaries—to an increased risk of Parkinson’s disease years later. But not all studies have reached that conclusion.

So Rocca’s team dove deeper into whether age at the time of surgery is key.

The researchers used health records from about 5,500 Minnesota women, half of whom had undergone a bilateral oophorectomy sometime between 1950 and 2007. The other half had not had the procedure and were matched by age to women in the surgery group.

Those women had undergone the procedure either to treat a non-cancerous ovarian condition, like cysts or other growths, or to lower the risk of ovarian cancer. Women who undergo hysterectomy (removal of the uterus) sometimes have the ovaries removed, too, with the aim of preventing ovarian cancer—an often deadly disease.

Overall, Rocca’s team found, 1% of all women in the study eventually developed Parkinson’s disease, while another 1.5% were diagnosed with parkinsonism—where people have some of the symptoms seen in Parkinson’s, but the underlying causes vary.

There were more cases among the 2,750 women who’d had both ovaries removed: 32 cases of Parkinson’s, versus 21 cases in the comparison group, and 50 versus 32 cases of parkinsonism.

When the researchers looked deeper, they found that the risks hinged on age: Women who’d had their ovaries removed before age 43 were five times more likely than other women their age to be diagnosed with Parkinson’s disease.

Bilateral ovary removal at an older age was not tied to an increased risk.

While these types of studies cannot prove cause and effect, Rocca said “combining the results of this study with the results of similar studies, and with what is known about the biological effects of estrogen on the brain, it is reasonable to suggest that removal of both ovaries has a causal effect on the risk of Parkinson’s disease.”

Dr. Michael Okun is national medical advisor to the nonprofit Parkinson’s Foundation. He said the study “adds to a collective and growing amount of evidence” that premenopausal women who undergo bilateral oophorectomy may face an increased Parkinson’s risk down the road.

What does that mean for younger women? In some cases, they may be advised to have both ovaries removed because they carry gene mutations that substantially raise their risk of ovarian cancer.

But for most women, Rocca noted, the odds of developing ovarian cancer are low. And in light of the potential long-term risks, he said, “removing the ovaries to prevent the disease is not justified.”

Okun urged women who may be considering bilateral oophorectomy to address all the pros and cons with their doctor.

“We recommend a thorough discussion of risks and benefits,” he said, “and we caution folks that each case should be handled by considering all factors that may impact multiple clinical outcomes.”

The findings were published online Oct. 26 in JAMA Network Open.

More information:
The Parkinson’s Foundation has more on understanding Parkinson’s.