You know how you don’t really notice yourself gaining weight, because you look at yourself in the mirror every day?

“I became a zombie, a mindless slave held captive by insatiable lust and craving.”

My breaking point was on sidewalk outside a Peet’s coffee in Davis, CA. It was the summer after my senior year of college and these two freshman-aged girls were walking ahead of me. This screaming animal urge inside me said, “WANT. MUST HAVE. LOOK. TOUCH!” In that moment I was reduced to a miserable pile of steaming shit.

Happiness: A Guide to Developing Life’s Most Important Skill

I remember thinking clearly, “I can’t keep living like this. If I don’t change something fundamental about my life, I’m going to end up a lonely, miserable, perverted old man who tries to pick up college girls at bars.” And then I had what felt like a nervous breakdown. I truly realized that if I didn’t do something, I would always be a pervert just looking for sex.

After that moment on the sidewalk, I knew something had to change. I went to a bookstore for books on positive psychology, which lead me to the book Happiness by Matthieu Ricard.

The concept in his book that really changed everything for me was neuroplasticity. It’s essentially the understanding that what you think, do, and even pay attention to, will literally change the structure and function of your brain.

“Through my meditation training I tasted what real happiness is.”

Soon after reading the book, I traveled to India for three months in 2011.

This became my path to freedom. I learned how to meditate, and became a Buddhist monk, just as Ricard had done. When I came back, just before starting graduate school at Duke University, I started teaching meditation.

Through my meditation training I tasted what real happiness is, and it had nothing to do with pleasure. Real happiness was about gratitude, connection, and service.

After about four years of teaching meditation, I realized that I was more passionate about mental health and wellness than I was about the research I was doing for my Ph.D. (which was genetics and genomics). In 2014 I left my Ph.D. program and decided to devote my life to teaching people how to find genuine happiness and inner peace.

I didn’t open up about my past addictions until 2018. It’s a scary thing to talk about publicly. But talking about this topic with other men has been a huge relief.

“When it comes to training the mind, you simply have to put in the work.” 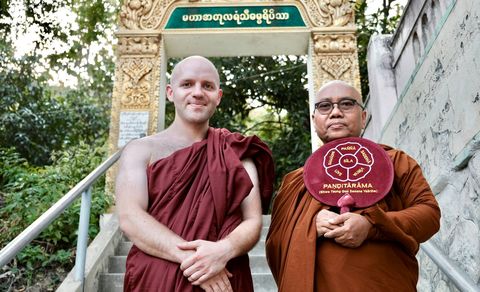 We don’t change our lives overnight. When it comes to training the mind, you simply have to put in the work. You can’t just read a book or listen to a guided meditation and expect your problems to go away. This practice is about rewiring your mind. That takes time, consistency, and perseverance.