You are here:
Home / Health News / Mosquito-borne diseases could be prevented by skin cream

Mosquito-borne diseases could be prevented by skin cream 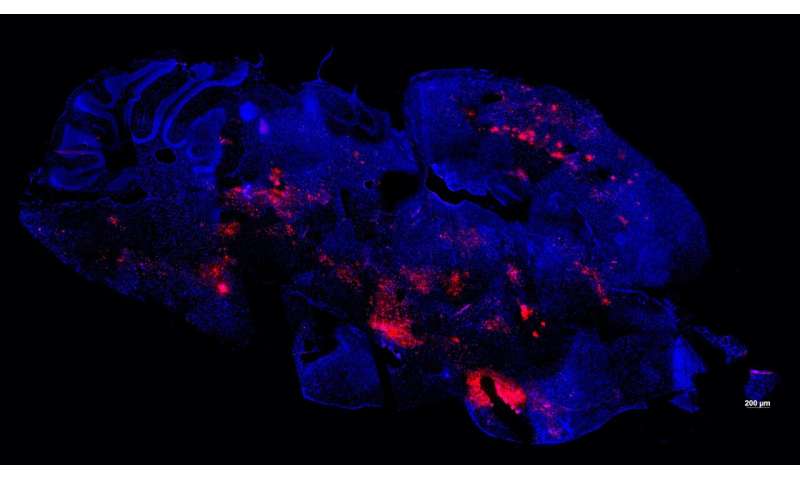 A skin cream used to treat warts and skin cancer could help protect people against viral diseases such as Zika and dengue, according to new research from the University of Leeds.

Their findings have identified a new way we might prevent infection from a wide variety of dangerous viruses.

The climate emergency, coupled with an increasingly inter-connected world, has led to an upsurge in potentially deadly mosquito-borne illnesses for which no effective treatments currently exist.

Scientists studied four types of virus transmitted by mosquitos and found that applying a cream within an hour of a mosquito bite dramatically reduced infection rates in their models.

They used two different models to understand the effect of the skin cream—human skin samples and mice. In both cases, applying the skin cream acted like a warning signal which caused a rapid activation of the skin’s immune response that fights any potential viral threats. This prevented the virus from spreading around the body and causing disease.

The cream, called imiquimod or Aldara, is commonly used to treat genital warts and some forms of skin cancer. The researchers caution that further testing is needed before recommendations can be made for people to start using this cream on mosquito bites.

Their research is published today in Science Translational Medicine.

Lead author Dr. Clive McKimmie, from the University of Leeds’ School of Medicine, said: “This study shows that a clinically approved, widely used skin cream has the potential to be repurposed as a valuable protector against insect-borne diseases.

“What is especially encouraging about our results is that the cream was effective against a number of distinct viruses, without needing to be targeted to one particular virus.

“If this strategy can be developed into a treatment option then we might be able to use it to tackle a wide range of new emerging diseases that we have not yet encountered. 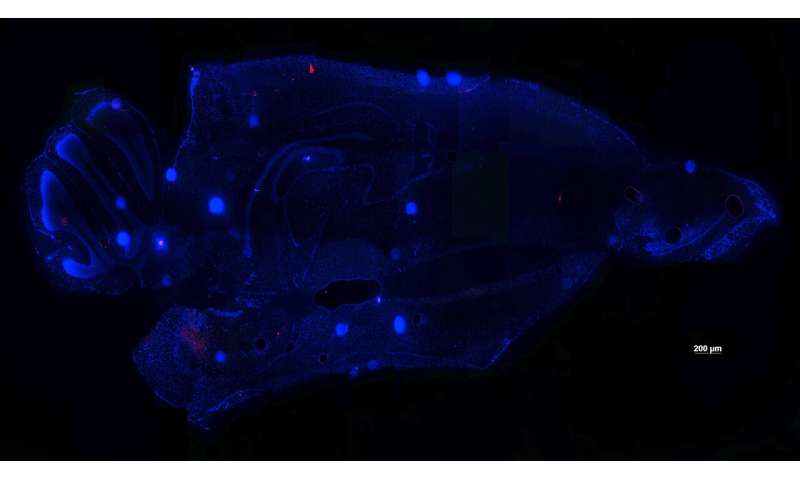 “Mosquitos are expanding their range across the world as the planet gets hotter due to the climate emergency, so the health impact of mosquito-borne diseases is likely to increase in future.”

There are hundreds of viruses spread by biting mosquitoes which can infect humans.

These include the dengue virus, West Nile virus, Zika virus and chikungunya virus, which have all had large outbreaks in recent years.

This includes the unprecedented West Nile virus outbreak in Europe during the summer of 2018 which saw over 1,300 cases, resulting in 90 deaths. While in 2019, we had the worst year on record for Dengue in the Americas.

At present, there are no anti-viral medicines and few vaccines to help combat these infections.

How does it work?

When a mosquito bites the skin, the body reacts in a very specific way to try and mitigate the physical trauma of the skin being punctured.

The bite causes a wound healing repair mechanism to begin, however, the skin does not prepare itself to respond to viral attack.

This means mosquito-borne viruses that enter the skin through a bite are able to replicate quickly with little anti-viral response in the skin and then spread throughout the body.

By applying skin cream after a bite, researchers found that they could pre-emptively activate the immune system’s inflammatory response before the virus becomes a problem. The cream encouraged a type of immune cell in the skin, called a macrophage, to suddenly spring into action to fight off the virus before it could spread around the body.

Co-author Dr. Steven Bryden, who carried out the research as part of his Ph.D. at Leeds, said: “By boosting the immune system and not targeting a specific virus, this strategy has the potential to be a ‘silver bullet’ for a wide range of distinct mosquito-borne viral diseases.” 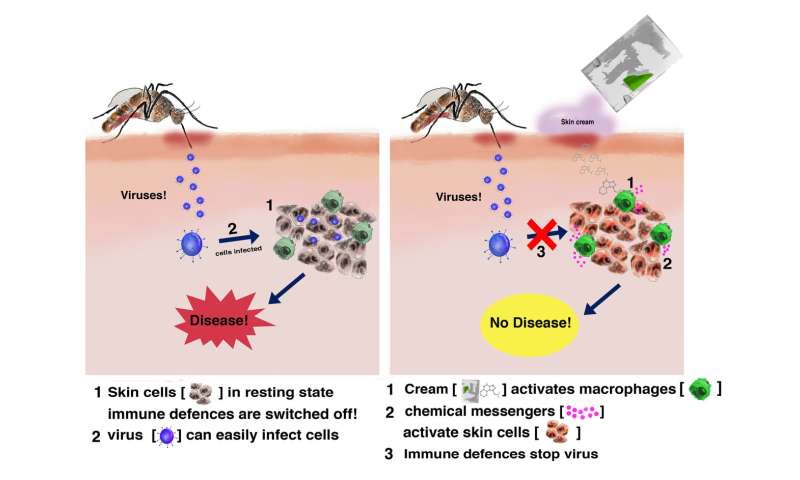 Two of the viruses—Zika and chikungunya—were tested on samples of human skin.

Small skin samples were taken from 16 volunteers and kept in healthy condition in the laboratory. They cut each sample in half and allowed both halves to be infected by virus.

After an hour they applied skin cream to one half of each sample, leaving the other half without treatment. Two days later they measured how well the virus had infected and replicated within the skin.

For Zika virus they found that the skin that did not receive the treatment contained over 70 times more virus than the skin which received the treatment.

Similarly, for chikungunya virus the skin that did not receive the treatment contained over 600 times more virus than the skin which received the treatment. In both cases, treated skin did not release any infectious virus, meaning virus would not have spread and caused disease in the body had this occurred in a person.

Three distinct viruses—Semliki Forest, chikungunya and Bunyamwera—were tested on mice. This allowed the researchers to understand whether the skin cream could stop viruses from infecting and causing damage to the rest of the body.

Mice were infected with virus at mosquito bites. One hour later, half of the mice had the skin cream applied to their bites and the other half did not.Two weeks after infection with the deadly Semliki Forest virus, the survival rate for the mice that did not receive the cream was 0%, compared to 65% survival for those that did receive the treatment.

Chikungunya virus causes arthritis in the joints in both humans and mice. To measure the extent of viral infection, researchers looked at the number of ankle joints in each mouse’s body that had become infected with virus. 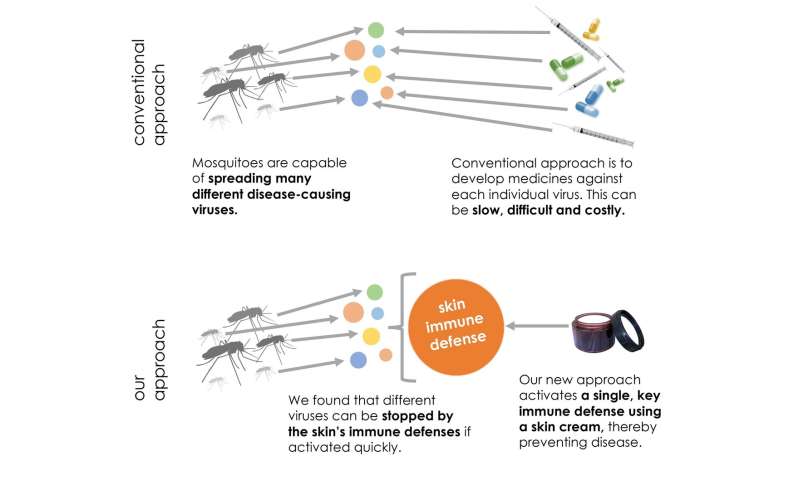 Two weeks after being infected with chikungunya virus, 70% of mice that did not receive the cream had virus in their ankle joints, compared to 30% for those that did receive the treatment. In addition, in mice that were treated, those joints that were infected had 90-times less virus, suggesting joints had been protected from more severe infection.

The researchers also looked at Bunyamwera virus, which is genetically distant from the other viruses, to understand if the cream could be effective against a wide range of diseases.

Co-author Dr. Kave Shams, an NHS dermatology consultant from the University of Leeds’ School of Medicine, said: “It is too soon for us to recommend that people use this cream on their mosquito bites, as further testing and development is needed to ensure it can be used safely and effectively for this purpose. But we are hopeful that one day this discovery could help a vast number of people to avoid disease, particularly in parts of the world hardest hit by these devastating diseases.

“If we can repurpose this cream into an anti-viral treatment option, it could be a useful addition to mosquito repellent as a way of avoiding infection from harmful diseases.

“This approach could be particularly valuable for people at high risk of infection, such as those with a suppressed immune system, and in times of disease outbreak.”