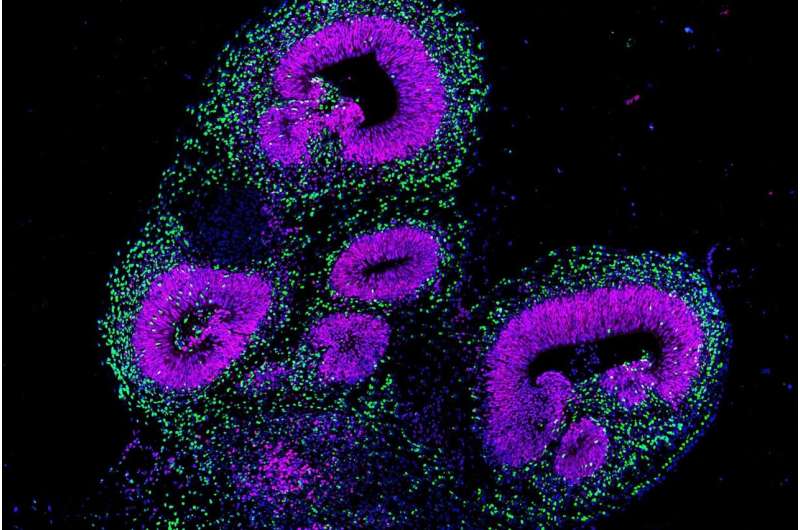 The human brain is probably the most complex organ in the entire living world and has long been an object of fascination for researchers. However, studying the brain, and especially the genes and molecular switches that regulate and direct its development, is no easy task.

To date, scientists have proceeded using animal models, primarily mice, but their findings cannot be transferred directly to humans. A mouse’s brain is structured differently and lacks the furrowed surface typical of the human brain. Cell cultures have thus far been of limited value in this field, as cells tend to spread over a large area when grown on a culture dish; this does not correspond to the natural three-dimensional structure of the brain.

A group of researchers led by Barbara Treutlein, ETH Professor at the Department of Biosystems Science and Engineering in Basel, has now taken a new approach to studying the development of the human brain: they are growing and using organoids—millimeter-sized three-dimensional tissues that can be grown from what are known as pluripotent stem cells.

Provided these stem cells receive the right stimulus, researchers can program them to become any kind of cell present in the body, including neurons. When the stem cells are aggregated into a small ball of tissue and then exposed to the appropriate stimulus, they can even self-organize and form a three-dimensional brain organoid with a complex tissue architecture.

In a new study just published in Nature, Treutlein and her colleagues have now studied thousands of individual cells within a brain organoid at various points in time and in great detail. Their goal was to characterize the cells in molecular-genetic terms: in other words, the totality of all gene transcripts (transcriptome) as a measure of gene expression, but also the accessibility of the genome as a measure of regulatory activity. They have managed to represent this data as a kind of map showing the molecular fingerprint of each cell within the organoid.

However, this procedure generates immense data sets: each cell in the organoid has 20,000 genes, and each organoid in turn consists of many thousands of cells. “This results in a gigantic matrix, and the only way we can solve it is with the help of suitable programs and machine learning,” explains Jonas Fleck, a doctoral student in Treutlein’s group and one of the study’s co-lead authors.

To analyze all this data and predict gene regulation mechanisms, the researchers developed their own program. “We can use it to generate an entire interaction network for each individual gene and predict what will happen in real cells when that gene fails,” Fleck says.

The aim of this study was to systematically identify those genetic switches that have a significant impact on the development of neurons in the different regions of brain organoids.

With the help of a CRISPR-Cas9 system, the ETH researchers selectively switched off one gene in each cell, altogether about two dozen genes simultaneously in the entire organoid. This enabled them to find out what role the respective genes played in the development of the brain organoid.

“This technique can be used to screen genes involved in disease. In addition, we can look at the effect these genes have on how different cells within the organoid develop,” explains Sophie Jansen, also a doctoral student in Treutlein’s group and the second co-lead author of the study.

Checking pattern formation in the forebrain

To test their theory, the researchers chose the GLI3 gene as an example. This gene is the blueprint for the transcription factor of the same name, a protein that docks onto certain sites on DNA in order to regulate another gene. When GLI3 is switched off, the cellular machinery is prevented from reading this gene and transcribing it into an RNA molecule.

In mice, mutations in the GLI3 gene can lead to malformations in the central nervous system. Its role in human neuronal development was previously unexplored, but it is known that mutations in the gene lead to diseases such as Greig cephalopolysyndactyly and Pallister Hall Syndromes.

Silencing this GLI3 gene enabled the researchers both to verify their theoretical predictions and to determine directly in the cell culture how the loss of this gene affected the brain organoid’s further development. “We have shown for the first time that the GLI3 gene is involved in the formation of forebrain patterns in humans. This had previously been shown only in mice,” Treutlein says.

“The exciting thing about this research is that it lets you use genome-wide data from so many individual cells to postulate what roles individual genes play,” she explains. “What’s equally exciting in my opinion is that these model systems made in a Petri dish really do reflect developmental biology as we know it from mice.”

Treutlein also finds it fascinating how the culture medium can give rise to self-organized tissue with structures comparable to those of the human brain—not only at the morphological level but also (as the researchers have shown in their latest study) at the level of gene regulation and pattern formation. “Organoids like this are truly an excellent way to study human developmental biology,” she points out.

Research on organoids made up of human cell material has the advantage that the findings are transferable to humans. They can be used to study not only basic developmental biology but also the role of genes in diseases or developmental brain disorders. For example, Treutlein and her colleagues are working with organoids of this type to investigate the genetic cause of autism and of heterotopia; in the latter, neurons appear outside their usual anatomical location in the cerebral cortex.

Organoids may also be used for testing drugs, and possibly for culturing transplantable organs or organ parts. Treutlein confirms that the pharmaceutical industry is very interested in these cell cultures.