The human brain is less accessible than other organs because it is covered by a thick, hard skull. As a result, researchers have been limited to low-resolution imaging or analysis of brain signals measured outside the skull. This has proved to be a major hindrance in brain research, including research on developmental stages, causes of diseases, and their treatments. Recently, studies have been performed using primary neurons from rats or human-derived induced pluripotent stem cells (iPSCs) to create artificial brain models that have been applied to investigate brain developmental processes and the causes of brain diseases. These studies are expected to play a key role to unlocking the mysteries of the brain.

In the past, artificial brain models were created and studied in 2D; however, in 2017, a research team from KIST developed a 3D artificial brain model that more closely resembled the real brain. Unfortunately, due to the absence of an analytical framework for studying signals in a 3D brain model, studies were limited to analyses of surface signals or had to reform the 3D structure to a flat shape. As such, tracking neural signals in a complex, interconnected artificial network remained a challenge.

The Korea Institute of Science and Technology (KIST) announced that the research teams of Doctors Il-Joo Cho and Nakwon Choi have developed a analysis system that can apply precise non-destructive stimuli to a 3D artificial neural circuit and measure neural signals in real-time from multiple locations inside the model at the cellular level.

The 3D multifunctional system for measuring neural signals is in the form of a 50μm-wide needel shaped silicon probe array (about half the width of a human hair) integrated with 63 microelectrodes. When this system is inserted in the artificial brain model, it is capable of simultaneously measuring signals from multiple locations inside the neural circuit. The probe contains an optical fiber and drug-delivery channels, enabling precise stimulation of neurons using light or drugs. By measuring functional changes in the brain model in response to these stimuli, the model can be used to study brain function and brain diseases. 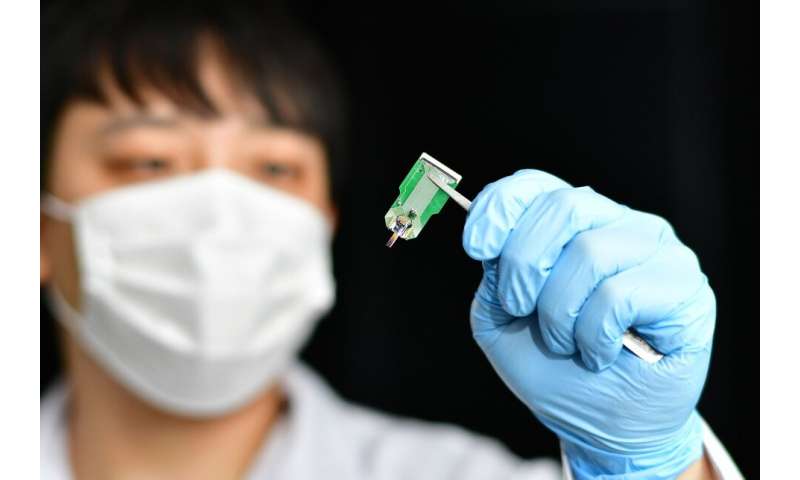 Using this system to stimulate neural circuits in the artificial brain model optically and simultaneously measure the spread of the response signal in multiple locations, the research team demonstrated that the propagation speed of neural signals were different according to directions inside the 3D brain modeln. In addition to structural brain maps, which can be constructed using electron microscopy, this study demonstrated the possibility of constructing 3D functional brain maps that show how different circuits are functionally connected within complex artificial brain networks.