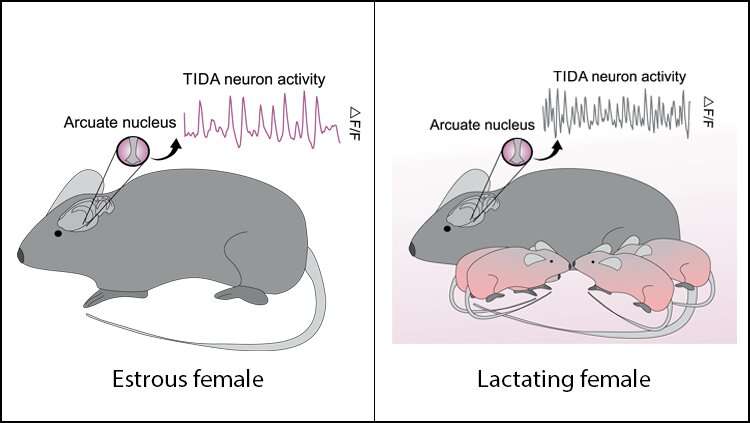 Lactation temporarily changes how a mother’s neurons behave, according to new research in mice published in JNeurosci.

Mothers experience profound changes in their body after giving birth, many of which are controlled by the hormone prolactin. Neurons in the hypothalamus called TIDA neurons regulate prolactin secretion as it fluctuates during the estrous cycle. However, during lactation, the TIDA neurons stop keeping prolactin levels in check, teasing the possibility that they may be altering their properties in response to motherhood.

Thörn Pérez et al. examined the electrical behavior of TIDA neurons in mice both during lactation and throughout the estrous cycle. In order to regulate prolactin, the voltage of TIDA neurons oscillates up and down: when the cell voltage is less negative, it fires more often, while a more negative cell fires less often.

The scientists observed that the cell voltage oscillates more frequently during lactation, meaning it fires more often overall. They also fire out of rhythm with each other.

These changes are fully reversible—the cells return to normal when the moms start weaning.