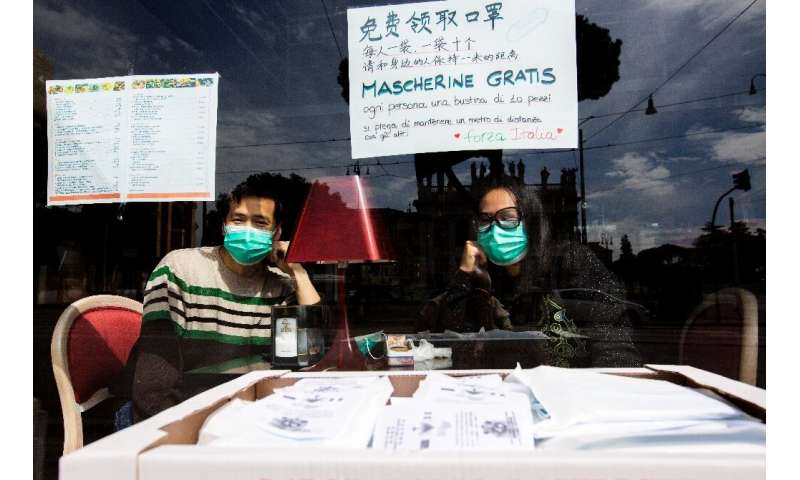 Conte’s videoconference with the government’s scientific committee came one week before Italy’s economically-crippling closure of most businesses and factories is set to expire.

Few expect it will.

The shutdown and an accompanying ban on almost all outdoor activity have helped slow the spread of a novel coronavirus that has officially claimed a world-topping 17,127 lives.

The daily reported toll reached 969 on March 27 and has since levelled off.

There were 604 new fatalities on Tuesday and the rise in infections fell to a new low of just 2.3 percent.

But health officials warn that the outbreak appears to have peaked only because of the various closures and bans.

They insist on keeping the containment rules in place as long as possible—perhaps until a vaccine is developed or some reliable tests can show who has immunity against the new disease.

“We are far from the end,” the scientific committee’s head Domenico Arcuri told reporters before entering the talks with Conte.

“The number of men and women who will die from the virus will continue to rise.”

Italian businesses counter that they cannot afford to stand idle much longer.

A study released Tuesday by the Confcooperative small business lobby said the economy was being subjected to an “epochal shock” that would take at least two years to overcome.

It estimated that more than half of Italy’s 1.3 million construction workers and over a third of the 11.4 million services sector employees were now furloughed.

Conte has tried to help out both families and businesses by putting the Italian government into staggering debt.

He unleashed a 25-billion-euro ($27 billion) emergency support programme that included about 340 billion euros in government-backed loans for small businesses.

Italy’s health “emergency is also an economic and social one,” Conte said in a nationally televised address.

His video conference with the scientists is officially focused on “Phase Two”—the formal name for the idea of taking incremental steps in easing restrictions.

The scientists will first focus on which of the country’s most economically important factories in the northern industrial heartland to allow to resume production on April 14.

A five-point outline leaked to Italian media on Sunday included plans to instruct everyone to wear face masks in public and to self-isolate immediately in case of flu-like symptoms.

“I think many of us—if not all—will have to the used to wearing protective masks for a long time,” said Arcuri, the head of the government’s scientific committee.

But small businesses such as restaurants and cafes are not expected to be allowed to resume operations for many more months.

“Even when the new coronavirus cases fall to zero, life will not be the way it was for a long time,” Italy’s ISS public health institute director Silvio Brusaferro warned over the weekend.