You are here:
Home / Health News / Identifying genes that control our ‘metabolic individuality’ and disease risk

Identifying genes that control our ‘metabolic individuality’ and disease risk 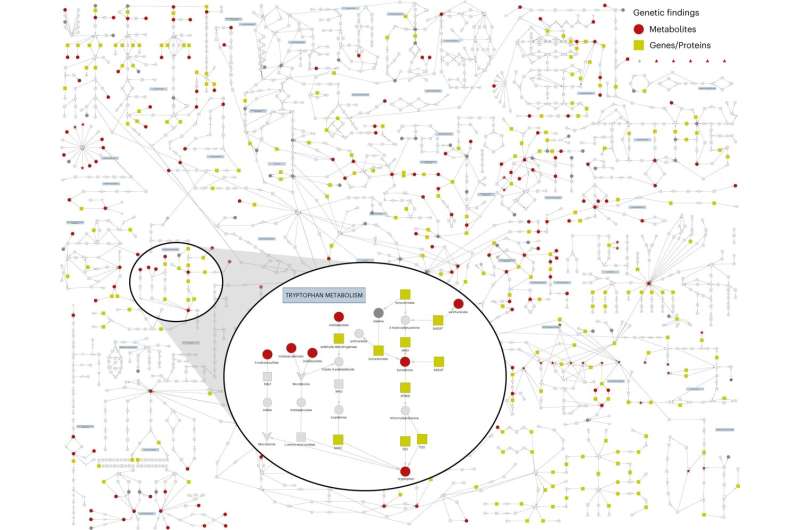 Everybody has a ‘chemical fingerprint’ characterized by the composition of small molecules in the blood, such as fats or sugars. It is determined by both our genes and external factors and contributes to which diseases we are susceptible to, as well as how severe an illness will be.

In the new study, published in Nature Medicine, the international team discovered rare and common changes in the genetic code that influence this metabolic individuality and its impact on health and disease.

Adam Butterworth explains, “With our study, we are finally illuminating the genetic control of our metabolism based on many hundreds of small circulating molecules and demonstrating how such variation affects the onset of diverse diseases.”

The scientists measured the levels of more than 900 small molecules in blood samples from over 14,000 participants in two large UK population studies—the INTERVAL study and the EPIC-Norfolk study—whose genetic code had also been analyzed. They identified 330 regions in the genome that are linked to the levels of 646 different metabolites, with most regions linked to several metabolites, and vice versa.

Metabolism and responses to treatment

The variations in the metabolic ‘hotspots’ in the genome do not only play a role in a healthy metabolism or disease susceptibility. They scientists also identified variations that affect how impactful drugs are, and the severity of their harmful effects.

For example, the researchers found that about one fifth of the study participants had variations in the genetic code close to the DPYD gene. DPYD encodes for an enzyme that is responsible for breaking down certain common cancer chemotherapy drugs. People with these genetic variants are at an increased risk of accumulating elevated levels of these drugs and consequently more severe effects.

Claudia Langenberg added, “Variations near genes that are also the target of drugs can give us clues about possible unwanted side effects. For example, we were able to show that drugs that reduce the conversion of steroid hormones in the body and thus counteract male hair loss and prostate enlargement may increase the risk of depression, which is consistent with reports from drug studies.”

Excitingly, information about an individual’s chemical fingerprint and the genomic variations that underpin it could help clinicians to more effectively tailor treatments to individual patients, and Professor Langenberg is already leading a new initiative to support this, saying, “We need larger studies that better map the genetic diversity of different populations to understand the biological and clinical effect of genetic variations that differ between certain populations.”