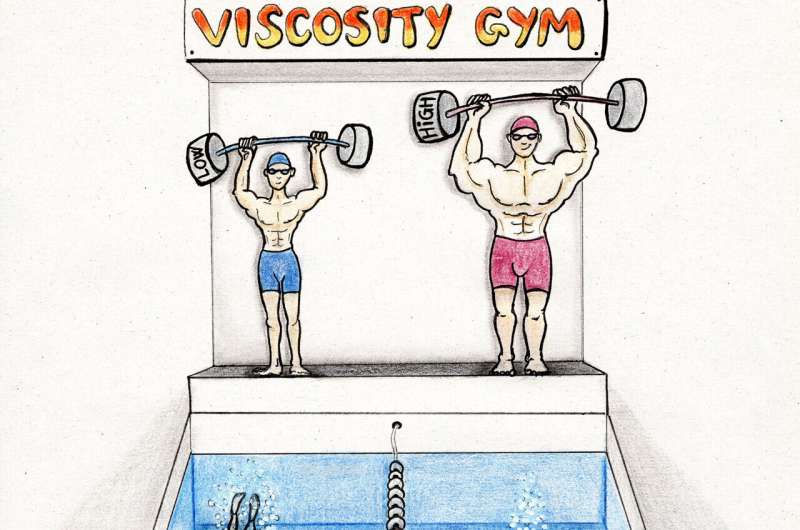 New research findings show how higher viscosity, or resistance to flow, of the extracellular fluid that surrounds cells enables cancer cells to migrate more rapidly from a primary tumor to other sites in the body.

“We deciphered how cells sense and respond to physiologically relevant levels of fluid viscosity that are commonly found in the body of healthy and diseased patients,” says Konstantinos Konstantopoulos, Ph.D., lead investigator of the study, the William H. Schwarz Professor of Chemical and Biomolecular Engineering with appointments in Biomedical Engineering and Oncology, and member of the Johns Hopkins Kimmel Cancer Center Invasion and Metastasis Program.

“We also showed that cells have the ability to form memory when preexposed to elevated fluid viscosities. We believe these findings will compel researchers in other fields, beyond cancer mechanobiology, to consider fluid viscosity as a key physical cue that regulates cell responses.”

The findings, which reveal a novel mechanism that promotes cancer cell dissemination, were published Nov. 2 in Nature and provide a framework for ongoing research that may ultimately lead to the identification of potential new targets to combat cancer metastasis.

Although deregulated viscosity of bodily fluids has been correlated with many diseases for almost half a century, studies on cancer cell dissemination to date were primarily performed using fluids of low viscosity, similar to water, explains Kaustav Bera, Ph.D., a recent graduate from the Konstantopoulos lab and first author of the study. “The expectation was that since there is more resistance in more viscous fluids, cancer cells wouldn’t move or metastasize efficiently, but we showed that the opposite is true,” she says.

The researchers revealed how cells sense and respond to the physical cue of elevated viscosity, and how the cytoskeleton, which controls cell shape and intracellular organization and is involved in cell movement, cooperates with ion channels and ion transporters—the proteins that channel the flow of charged molecules across the membrane of cells—to mediate efficient migration at elevated viscosities.

Extracellular viscosity rises with the degradation of large proteins secreted by both normal and cancer cells and with the compromised drainage of lymphatic vessels due to primary tumor growth. The researchers found that a higher resistance environment drives the formation of a denser actin network, which promotes local enrichment of ion transporters that cooperate with water channels to facilitate water uptake, promote cell swelling and increase membrane tension.

At the cell’s leading edge, this increased membrane tension activates a signaling pathway, which includes an ion channel called TRPV4 that senses physical cues. Fluid viscosity instructs the cell to open its TRPV4 channels, facilitating the intake of calcium, which enhances the force- generating capacity of cells and ultimately drives faster cell movement.

“It is like the cells under high viscosity have gone to the gym to do hard training and develop muscle (actin and myosin), which improves their performance to reach their final destination faster,” says Selma Serra, Ph.D., study co-author and researcher at Pompeu Fabra University in Barcelona, Spain.

It was previously thought that the mechanosensing cascades begin with ion channels like TRPV4, says Alex Kiepas, Ph.D., a postdoctoral fellow and the second author of the study. “We found that viscosity sensing starts with the formation ofmore dense and highly branched actin, and TRPV4 activation is actually downstream of actin,” he says.

When the researchers knocked down TPRV4, they blocked the faster movement, of cells and their ability to form memory in response to preexposure to elevated viscosities. The researchers used 3-day-old zebrafish embryo models to show that memory of elevated viscosity can enable cells to move faster through blood vessels in vivo.

They also used chicken embryo and mouse models to demonstrate that the memory can enhance cancer cell spread out of blood vessels, through a process called extravasation, and lead to a greater number of distant metastatic colonies.

Konstantopoulos says it will be informative to examine, in laboratory animal models, how primary tumors and cancer cells disseminating from primary tumors respond to local changes in extracellular fluid viscosity during disease progression and during invasion into the tissue microenvironment.

The development and optimization of biosensors that enable real-time measurement of extracellular fluid viscosity together with imaging cancer cells in living animals will be crucial for addressing this point. They also plan to investigate whether extracellular viscosity affects other physiologically relevant cellular processes.