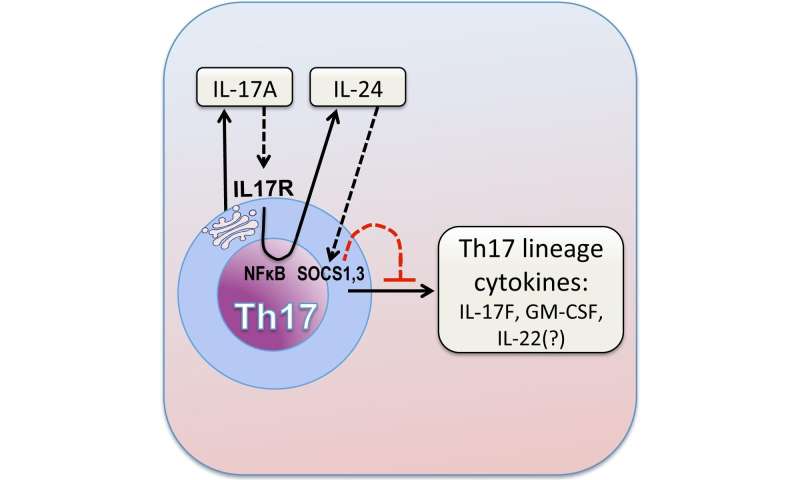 The inflammatory molecule interleukin-17A (IL-17A) triggers immune cells that in turn reduce IL-17A’s pro-inflammatory activity, according to a study by National Eye Institute (NEI) researchers. In models of autoimmune diseases of the eye and brain, blocking IL-17A increased the presence of other inflammatory molecules produced by Th17 cells, immune cells that produce IL-17A and are involved in neuroinflammation. The finding could explain why IL-17-targeted treatments for conditions like the eye disease autoimmune uveitis and multiple sclerosis (MS) have failed. A report on the findings was published in Immunity. NEI is part of the National Institutes of Health.

In autoimmune uveitis, immune cells become abnormally activated and begin to destroy healthy cells, including light-sensing photoreceptors and neurons. A key immune cell involved in this response is the Th17 lymphocyte, which produces several pro-inflammatory molecules known as cytokines. A hallmark of Th17 cells is the ability to produce IL-17A, which attracts immune cells called neutrophils that can damage tissue. Nevertheless, multiple clinical trials of drugs that block IL-17A have failed to help people with autoimmune uveitis or MS.

“IL-17 is the prototypical inflammatory immune molecule blamed for autoimmunity in the neuro-retina and the brain, but there’s been some controversy about the role it plays,” said Rachel Caspi, Ph.D., chief of the Laboratory of Immunology at NEI and senior author of the study. “In our model of autoimmune uveitis, we noticed that without IL-17, the amount of tissue damage unexpectedly stayed the same and we had higher levels of other inflammatory molecules.”

Caspi and colleagues used mouse models to investigate how IL-17A functions in the course of disease. The researchers were able to selectively remove IL-17A from Th17 cells and examine the cells’ behavior in models of both uveitis and MS. Curiously, they found that these cells produce more IL-17F, GM-CSF, and possibly other inflammatory molecules. The researchers concluded that these additional inflammatory cytokines compensate for the loss of IL-17A in driving inflammation.

“How could this work, we asked ourselves,” said Caspi. “Scientists are like little kids, when they get an answer to one question, there is immediately the next level of ‘why?’ So we started looking at the deeper mechanisms that make the whole thing tick.”

Usually, the IL-17A signal is picked up by other cells—including retinal tissue cells and neutrophils—that carry the IL-17 receptor. This receptor is a cell-surface protein cells that fits with IL-17A like a lock and key. But in this case, the researchers found copies of the IL-17 receptor on the surface of the Th17 cells that made the IL-17A in the first place.

“The process of cells binding a signal they have themselves produced—called autocrine signaling—has been known to happen in other cell types on occasion. But it hasn’t been seen in Th17 cells before,” said Caspi.

Caspi and colleagues found that when IL-17A binds to its receptor on Th17 cells, this triggers a signaling cascade that turns up the cells’ production of an anti-inflammatory molecule, interleukin-24 (IL-24), which was not previously known to be produced by Th17 cells. IL-24 in turn suppresses the rest of the Th17 cells’ inflammatory program, turning down the production of cytokines like IL-17F, GM-CSF and possibly IL-22. Thus, without IL-17A, this autocrine loop does not happen, causing the Th17 cells to overproduce the other inflammatory cytokines and thereby increase inflammation.

IL-17A has been associated with several types of uveitis, a disease that causes up to 15% of cases of blindness in the U.S. Uveitis is generally treated with steroids, which can have serious side-effects.