A cup of hot chocolate a day could keep the doctor away: Cocoa ‘boosts blood circulation in legs and helps keep over 60s on their feet’

Drinking hot chocolate could help over 60s stay on their feet after a study shows cocoa boosts blood circulation in the legs.

Those who drank a mug of cocoa three times a day for six months were able to walk significantly further in a walking test at the end of the study.

Cocoa is abundant in a compound called epicatechin, also found in dark chocolate.

Researchers think it’s epicatechin that may improve blood flow to participants’ calves, allowing them to go the extra distance.

The study was done on people with the common peripheral artery disease or ‘PAD,’ which is a narrowing of the arteries.

A fifth of people over 60 in the UK have some degree of PAD, causing pain, tightness and cramping in leg muscles while walking. 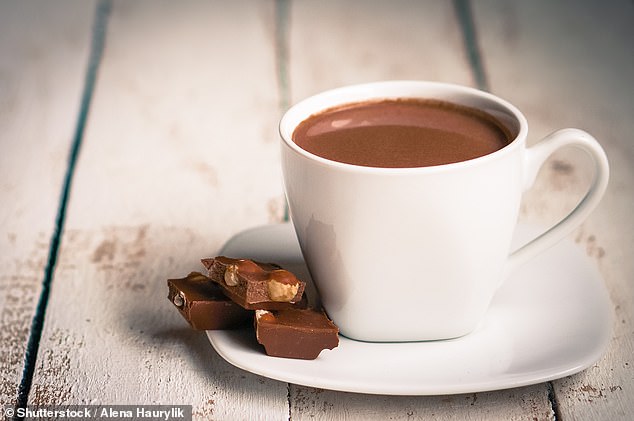 Drinking hot chocolate could help over 60s stay on their feet after a study suggests cocoa boosts blood circulation in the legs, study shows

Commenting on the findings, study author Professor Mary McDermott, at Northwestern University in Chicago, US, said: ‘Few therapies are available for improving walking performance in people with PAD.’

Dr Naomi Hamburg, chair of the American Heart Association’s Peripheral Vascular Disease Council, added:  ‘Patients with PAD have difficulty walking that is as bad as people with advanced heart failure.

‘Leg muscles don’t get enough blood supply in PAD leading to injury and in this study, cocoa appeared to be protecting the muscle and improving metabolism.

‘We know that exercise therapy helps people with PAD walk farther, and this early study suggests that cocoa may turn out to be a new way to treat people with PAD.

‘We will need larger studies to confirm whether cocoa is an effective treatment for PAD, but maybe, someday, if the research supports it, we may be able to write a prescription for chocolate for our patients with PAD.’

The study involved 44 PAD patients over the age of 60.

Study participants were randomly assigned to drink either a mug of cocoa or a placebo powder packet without cocoa three times daily over six months.

The cocoa was unsweetened and contained 15 grams of cocoa and 75 mgs of epicatechin.

Walking performance was measured at the beginning of the study and at six months. Participants walked up and down a corridor for six minutes.

The test was done twice, at two and a half hours and 24 hours after drinking the beverage. They also did a treadmill test.

The participants also had the blood flow to their legs measured using an MRI scan, and those who consented had a calf muscle biopsy to evaluate muscle health.

The cocoa drinkers were able to walk up to 42.6 metres further in the final six-minute walking test completed at the end of the six month study.

But patients who drank the placebo beverage suffered a 24.2 metre decline in their walking distance at the end of the six-month period.

The authors said cocoa flavanols, including epicatechin, that are present in dark chocolate, have ‘therapeutic properties that may improve walking performance in people with PAD’.

The finding was consistent with other studies, in which PAD patients experience a deterioration in their walking distance over time, if they go untreated.

The team also discovered other improvements to muscle health – boosts were observed in both mitochondrial activity, which helps cells to convert the energy from food, and capillary density, a vital factor in delivering oxygen to tissues during exercise.

Professor McDermott said: ‘If our results are confirmed in a larger trial, these findings suggest that cocoa, a relatively inexpensive, safe and accessible product, could potentially produce significant improvements in calf muscle health, blood flow, and walking performance for PAD patients.’

The researchers highlighted that regular chocolate – often laden with sugar – would not be expected to have the same effect as the cocoa they used, which is commonly available.

The study was published today in the American Heart Association’s journal Circulation Research.

WHAT IS PERIPHERAL ARTERIAL DISEASE?

Peripheral arterial disease (PAD) is a condition in which the arteries in the legs become narrowed and restrict blood flow.

The condition is usually caused by a buildup of fatty deposits such as cholesterol on the inner lining of the blood vessels.

Acquired from the diet, these fats stick to the wall of the artery and shrink the space through which blood can travel, increasing blood pressure, reducing oxygen flow and making it more likely someone will develop gangrene or have a heart attack or stroke.

Around 200million people worldwide have PAD and it’s most common in old people, with one in five over-60s in the UK having it.

Symptoms are slow to develop and some people don’t notice them, but the main one is feeling an aching pain in the legs which may go away when resting.

Leg pain is not necessarily a normal sign or ageing and people should see a doctor if theirs keeps coming back.

PAD is more likely in patients who smoke or have diabetes, high blood pressure or high cholesterol.

The condition is treated with medications like statins and through lifestyle changes such as weight loss, quitting smoking, exercising more and eating healthily.