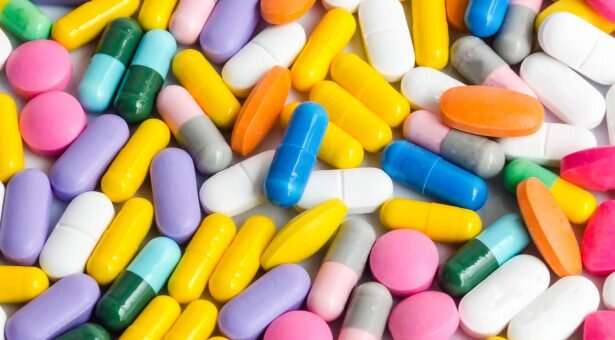 Computational modeling has been used to create dual-action compounds with exciting potential as new antibiotics. The proof of principle experiment raises the possibility of new antibiotics that can target harmful bacteria on two fronts and consequently are less likely to be overcome by resistant strains.

The University of Leeds/John Innes Center collaboration modeled potential new drugs based on the activity of thiophene compounds. These had previously shown promise as antibiotics before toxicity issues prevented them from going forward to human clinical trials.

Observing the activity of the thiophenes, the team computationally modeled new antibiotic candidates and then synthesized and tested them on pathogenic bacteria Escherichia coli (E. coli).

They found a series of biphenyl-based compounds inhibited the activity of the harmful bacteria by targeting two enzymes, DNA gyrase, and DNA topoisomerase IV, both of which are essential to bacterial survival.

“These novel compounds represent the start of a program that could lead to a new series of antibiotics,” said Professor Tony Maxwell, of the John Innes Center, and one of the authors of the study.

“The current program represents a proof of principle, and this initial success suggests we will be able to discover even better antibiotic candidates going forward,” added first author of the study, University of Leeds researcher Dr. Kyle Orritt.

The researchers have already discussed the implications of the work with pharmaceutical companies, raising the possibility of a new source of antibiotics.

This work follows the discovery of a new possibility of exploiting the established antibacterial target DNA gyrase which offers a new medicinal chemistry strategy.

New antibiotics are urgently needed due to the evolution of bacteria which are resistant to existing treatments. This problem of antimicrobial resistance (AMR) poses an enormous threat to human health due to an increase in the number of untreatable bacterial infections.

By 2050 it is predicted that AMR will be responsible for 10 million global deaths annually, more deaths than cancer and costing the world economy $100 trillion.