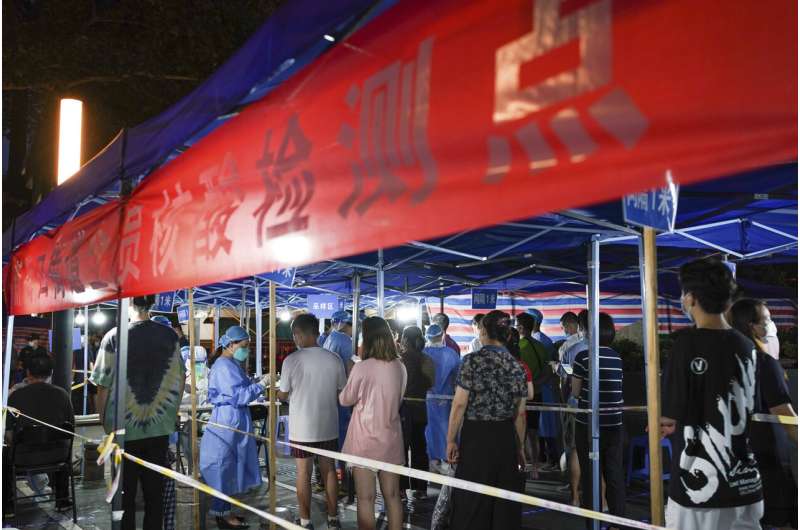 Roadblocks were set up to check drivers and a disease-control official called Thursday for increased testing of workers at Chinese ports after a rash of coronavirus cases traced to a major airport rattled authorities who thought they had the disease under control.

The 171 new cases of the more contagious delta variant in the eastern city of Nanjing and surrounding Jiangsu province are modest compared with India and some other countries. But infections traced to Nanjing Lukou International Airport have spread to at least 10 cities.

Nanjing, a city of 9.3 million people northwest of Shanghai, has ordered tens of thousands to stay home and is carrying out mass testing while experts look for the source of the virus.

The earliest cases were among employees and people who passed through Nanjing’s airport, which serves 30 million passengers a year. Officials cited by Chinese media say airport employees might have been infected from improper handling of trash but did not say how the virus might have gotten there.

“We should take special measures on high-risk groups, such as those at entry ports, when it comes to tests, discovery, tracing and vaccination,” said Shao Yiming of the Chinese Center of Disease Control, at a news conference.

Shao gave no details of what additional steps authorities might take.

The official newspaper Global Times reported Wednesday, citing unidentified sources, that all flights at the Nanjing airport will be suspended through Aug. 11. It said airport managers hadn’t ruled out a longer suspension.

The disease was first detected in late 2019 in the central Chinese city of Wuhan. The ruling Communist Party declared the disease under control in March 2020 and lifted most curbs on travel and business. But officials have re-imposed controls and conducted mass testing in some areas after recent outbreaks, most traced to infections acquired abroad.

Meanwhile, authorities are trying to contain an outbreak in Yunnan province on China’s southwestern border with Myanmar. The Yunnan health agency says many of those infected had been to Myanmar.

Outside of Yunnan, all locally transmitted infections over the past two weeks have been traced to Nanjing, according to health authorities. Cases are reported in Dalian and Shenyang in the northeast, Chengdu in the southwest and in the central tourist site of Zhangjiajie.

Drivers who want to leave Jiangsu need to show a negative coronavirus test taken in the past 48 hours, the provincial transportation department announced Wednesday. It said 93 checkpoints were set up on highways.

The city of Wuhu in Anhui province, adjacent to Jiangsu, said drivers and passengers will be tested on the spot at highway checkpoints if they lack proof of a negative test. An infection traced to Nanjing was found in the city on July 25.

Also Thursday, a 28-nation economic forum set up by China called for the United States and Europe to ensure poor countries get coronavirus vaccines.

The World Health Organization operates the COVAX initiative to supply low- and middle-income countries, but the Boao Forum for Asia said that wasn’t accomplishing enough. In a report, it urged Western governments to lift restrictions on vaccine exports and the Group of Seven major industrial economies to donate to poor countries.