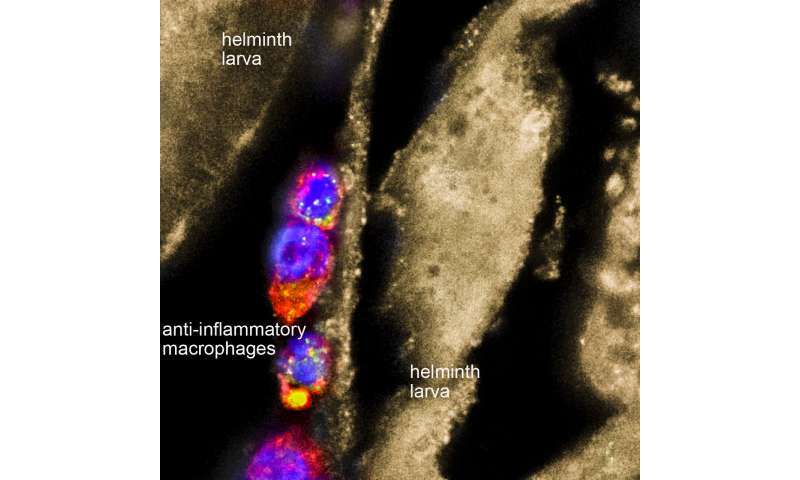 A team of researchers from Germany, Switzerland, Sweden and Australia has found that a substance isolated from roundworm larvae was able to reduce inflammation in the airways of mice. In their paper published in the journal Science Translational Medicine, the group describes extracting a protein from a type of parasite that infects rodents and used it to make a nasal therapy for mice.

The work involved collecting samples of Heligmosomoides polygyrus bakeri and removing extracts associated with reducing inflammation. They then mixed them into a nasal spray for use in mice with asthma-like lung inflammation due to exposure to dust mites. Doing so resulted in a strong reduction in inflammation. A closer look showed that treating the mice with the extract stimulated types of anti-inflammatory molecules called prostaglandin E2 and COX. It also showed that the extract behind the anti-inflammatory effect was glutamate dehydrogenase.

The researchers also applied their larval extract to human immune cells in a petri dish and found that doing so resulted in restrained inflammation—and it also set off triggers known as eicosanoids that serve as inflammation mediators. Other testing showed that the extract was effective in slowing granulocytes, which are involved in severe inflammatory episodes.