You are here:
Home / Health News / Woman reveals how GP visit revealed cancer that might have killed her

A lucky break: Woman reveals how a visit to a GP for an unusually heavy period revealed the cancer that might have killed her in a week

As a university ‘fresher’, Katherine Hawkes put an unusually heavy period down to the stress of being in unfamiliar surroundings.

The then 19-year-old was, after all, away from her home in Diss, Norfolk, and her parents Sally, an administrator, and Roy, a computer programmer, for the first time.

But she also felt exhausted and, two days later, faint, too. So Katherine put aside her embarrassment — ‘Having a heavy period seemed so trivial,’ she says — and booked an appointment with her doctor.

The decision saved her life. Within hours, she was in hospital starting life-saving treatment.

Katherine’s heavy period was a symptom of acute promyelocytic leukaemia (APL), a rapidly developing form of blood cancer. Left untreated, doctors told her, it would almost certainly have killed her within the week. As a university ‘fresher’, Katherine Hawkes put an unusually heavy period down to the stress of being in unfamiliar surroundings

It was shattering news. Her GP had only taken a blood test as a precaution, and told Katherine she’d get the result in a few days. But at 6pm that same day he called her to tell her she was so anaemic, she needed to go to hospital straight away.

Bewildered, Katherine set off to York Hospital with two housemates. There, a doctor ushered Katherine into a quiet room and told her: ‘There is a high chance that you have leukaemia. It’s so aggressive we need to start treatment tonight.’

‘It was so shocking I couldn’t take it in,’ says Katherine, now 22.

APL occurs when the bone marrow (the source of all blood cells) overproduces immature white blood cells, which means there is not enough space for other healthy blood cells to develop.

As a result, there is a lack of red blood cells (these carry oxygen around the body and a deficiency leads to breathlessness and lethargy) and white blood cells, which fight infections.

Crucially it also means a shortage of platelets, the component of blood that helps it clot and stems bleeding. This triggers symptoms such as bruising, because of unchecked leaking from tiny blood vessels — and heavy periods.

Dr Elaine Hampton, a GP with the charity Macmillan who helps to educate doctors in the signs and symptoms of leukaemia, says: ‘Along with fatigue and bruising, heavy bleeding is a key symptom of APL.’

‘Patients often have nosebleeds and bleeding gums, and a sudden change to an unusually heavy period can be a warning sign.’

While APL is rare — affecting around 160 people in the UK every year — unusually heavy periods can, in fact, be a sign of other types of leukaemia, of which there are 10,000 new cases on average each year in the UK. 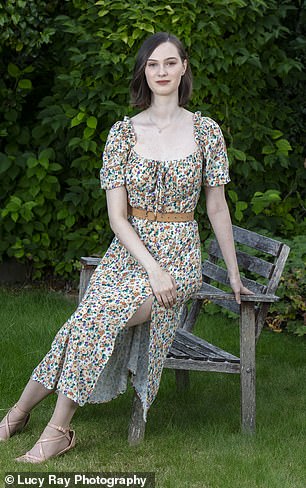 Katherine’s heavy period was a symptom of acute promyelocytic leukaemia (APL), a rapidly developing form of blood cancer. Left untreated, doctors told her, it would almost certainly have killed her within the week

Dr Hampton says women concerned by unusually heavy flow should not be embarrassed about seeing their GP, who will usually offer a blood test (to check for anaemia as a result of heavy bleeding, but which can also detect problems in the bone marrow).

A recent poll by Leukaemia Care revealed that 53 per cent of female patients had experienced a heavier-than-usual period in the lead up to diagnosis.

Katherine was three weeks into her first term of a psychology degree in 2018 when she experienced a period so heavy she had to use both a tampon and a pad.

‘I ended up sitting on a raincoat through every lecture to avoid bleeding on to things and then hoping I could get to the loo in the break,’ she says.

‘I reasoned it away. I’d been warned that when you make a massive change, such as starting university, your body takes time to adjust.’

Yet, looking back, she realises there were other symptoms, too. A few days after settling into her room, she noticed a large bruise between the thumb and index finger on her right hand and then started developing large bruises on her legs — one the size of a hand — but put it down to her natural clumsiness.

However, a week after noticing the first bruise and five days into her period, Katherine was on the bus when she thought she was going to faint.

Deciding she must be anaemic, she tried to see a GP but had to wait five days for an appointment.

Her GP suggested taking blood samples to check for anaemia. These showed that Katherine’s white blood cell count was 186; a healthy person’s score is ten.

Such a high level can be a sign of leukaemia, which is why the GP called Katherine and urged her to go straight to hospital.

Katherine had time only to call her parents quickly before setting off. When she arrived at the haematology ward, a doctor came straight over to her.

‘The first thing she asked me was if my parents lived far away,’ says Katherine. ‘I told her it was a four-hour drive from Norfolk. It was such a strange question. Why did she want to know?’

Fearing they didn’t have time to wait for them to arrive, the doctor told her she needed a bone marrow biopsy to confirm a suspected cancer diagnosis.

Katherine was stunned. ‘I decided it must be a mistake,’ she says. ‘I rang my parents and said: “I have cancer.” Then I started crying. The lovely doctor took the phone and explained that I was in good hands. She didn’t leave me until my parents arrived.’

As Katherine waited, a consultant reiterated the gravity of her situation. Her cancer was so aggressive, he told Katherine, that had she not visited the GP that morning: ‘You would have been dead by the end of the week.’

In order to get the specialist treatment she needed, Katherine had to be transferred that night from York Hospital to St James’s Hospital in Leeds.

With no time to wait for the results of definitive bone marrow biopsies, doctors hooked her up to an infusion of the chemotherapy drug idarubicin, the standard treatment for APL.

The treatment leads to remission in up to 90 per cent of cases. But within minutes of Katherine being put on it, it triggered differentiation syndrome — a common but potentially severe complication in APL patients where the dying white blood cells targeted by the chemotherapy flood the lungs. This was preventing Katherine’s body from absorbing oxygen, threatening acute organ damage.

Katherine’s parents arrived just in time to see her being put into a medically induced coma.

She remained in intensive care in a coma for eight days while doctors managed the differentiation syndrome. When she came round, she found her shoulder-length hair had started falling out.

‘When I was finally brave enough to look in the mirror, I didn’t recognise this balding, frail woman looking at me,’ she says. ‘I had lost my health, dignity, independence. Now I had lost my hair.’

In November, Katherine was transferred to Addenbrooke’s Hospital in Cambridge, closer to her family home, to start the second of four cycles of chemotherapy as an outpatient. As well as idarubicin, she was prescribed ATRA, a form of vitamin A that matures the white blood cells so they can be killed more effectively.

The side-effects of both drugs meant Katherine was in and out of hospital. ‘First the chemo inflamed my heart, causing pericarditis, where fluid collected around my heart and had to be drained,’ she says. ‘Then, on Christmas Eve, my right lung collapsed and had to be inflated.’

Katherine’s treatment ended on February 26, 2019, five months after her diagnosis. That September, she returned to York University to restart her degree and she is now in her third year.

Doctors have reassured her that her treatment has been a success and the cancer is unlikely to return, but she has follow-up appointments every three months.

‘I have one more appointment before they give me the all-clear and tell me they don’t need to see me again,’ she says.

‘I feel incredibly lucky. I’m enjoying my course and have made wonderful friends. My experience is also shaping my career plans — I intend to train as a clinical psychologist specialising in pain management,’ says Katherine.

‘But the emotional fallout has been horrific. I have nightmares and I get panic attacks just walking into a hospital. I’ve been told it’s a form of post-traumatic stress disorder.’

And there’s one thing she never forgets: ‘If I’d ignored my symptoms just a few days longer, I would be dead now.’

Simple changes to your everyday routine can boost your health. This week: Buy shoes for your age

Wearing the right pair of shoes could help improve your balance, but the best type for you may depend on your age.

If you’re over 65, shoes with less arch support and structure may encourage your brain to be more responsive to movement and therefore improve your balance and gait, according to a study published in the journal Scientific Reports.

Scientists from Liverpool University observed 30 people with an average age of 68 when they were walking and standing, wearing normal, structured trainers, ‘minimal’ shoes (with less arch and side support) and barefoot.

They found that those in the minimal shoes were most mobile, suggesting that footwear like this could help improve balance and prevent falls.

Meanwhile, a 2018 study suggested that sandals were the best option for improved balance and posture for those in their 20s and 30s. Scientists from King Saud University in Saudi Arabia compared sandals with standard shoes and bare feet.

They suggested that the type of shoes you wear influences balance through the pressure it puts on the foot’s main tissue, which then sends messages to the central nervous system, connected to the brain.