You are here:
Home / Health News / The coronavirus epidemic of 2020 in Finland began with five virus lineages 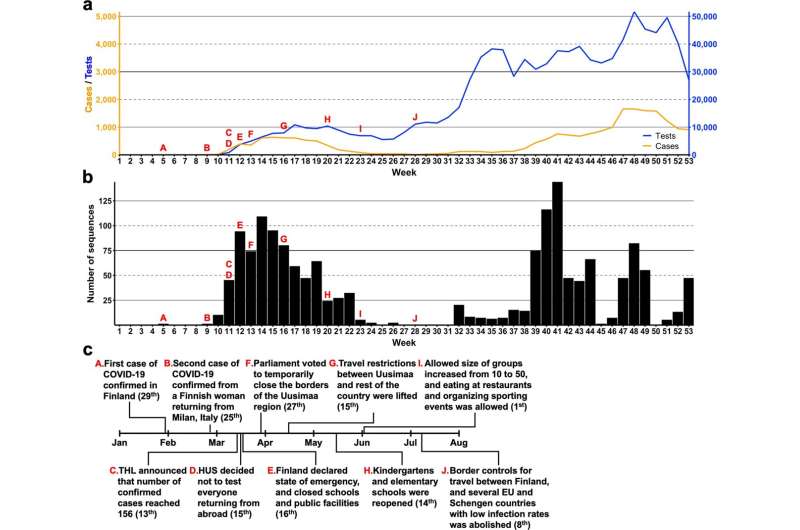 The COVID-19 pandemic began at the end of 2019 in Wuhan, China. Since then, the SARS-CoV-2 virus has spread rapidly despite attempts to restrict it. By mid-April 2022, the number of reported coronavirus infection cases exceeded 500 million globally, with the total number of deaths at over 6.2 million.

Researchers from the University of Helsinki and KU Leuven in Belgium investigated the arrival and spread of SARS-CoV-2 in Finland in 2020. According to the analysis, a total of 42 independent virus lineages arrived in Finland in spring 2020, of which only a handful caused large chains of transmission. The results have been published in the Communications Medicine journal.

“Research on the geographical evolutionary history of coronaviruses revealed that in the spring of 2020, an estimated 42 independent virus lineages arrived in Finland primarily from Italy, Austria and Spain. Four of these lineages caused two-thirds of the entire epidemic in Finland in spring 2020, while a single virus lineage from Spain led to a major transmission chain that covered one-third of the epidemic in the country. However, most of the 42 lineages did not lead to community transmission in Finland,” says Postdoctoral Researcher Ravi Kant.

“In the early stages of the pandemic, one of the biggest problems in monitoring the chains of transmission was the genetic similarity of the virus everywhere in the world—there were very few differences in the viral genome between individual countries and chains of transmission. Philippe Lemey’s research group developed an analysis technique that combines data on human mobility at individual and population levels with the sequence analysis of the viral genome. We applied this technique to Finnish sequencing data,” says Postdoctoral Researcher Teemu Smura.

Coronavirus landed in Finland from Austria, Italy and Spain

According to the researchers, Austria, Spain and Italy were the most significant sources of coronavirus spreading to Finland in 2020. These countries also had the earliest infection spikes in February 2020.

“One possible source of coronavirus infections are travelers from Austria who may have picked up the virus in popular skiing resorts. At least in the town of Ischgl in Tyrol, Austria, the coronavirus situation was serious in March 2020. The virus strains that spread from there may have been behind the transmission chains of a number of European countries,” says Doctoral Researcher Phuoc Truong Nguyen.

“Our results show that only a small share of infections is transmitted further, indicating that if travel restrictions and quarantines, testing, tracing and isolation schemes, or other border control measures are deployed early enough, they can delay the development of cases of infection into widespread transmission chains in society. However, these measures will only be effective if combined with other preventive measures, and if the viral strains to be prevented have not already spread,” says Professor Olli Vapalahti.

SARS-CoV-2 has evolved into a complex virus

The key questions pertaining to the coronavirus pandemic relate to the ongoing evolution of the virus. Originally, SARS-CoV-2 spread to humans as a zoonotic (transmissible between animals and humans) disease, most likely from bats.

“The circulation of the virus in a new host species requires numerous changes: for instance, the virus must adjust its surface proteins to make them attach more effectively to the cells of the host. In addition, the virus must overcome the host’s innate defenses. In fact, the rapid transmission of coronavirus between people in large human populations has produced complex genetic diversity in the virus. At the moment, one of the most central questions in related research is how these different changes alter the biological characteristics of the virus, and what kind of changes selection pressure is guiding the virus towards in the future,” says Associate Professor Tarja Sironen.

Epidemic waves in Finland in 2020