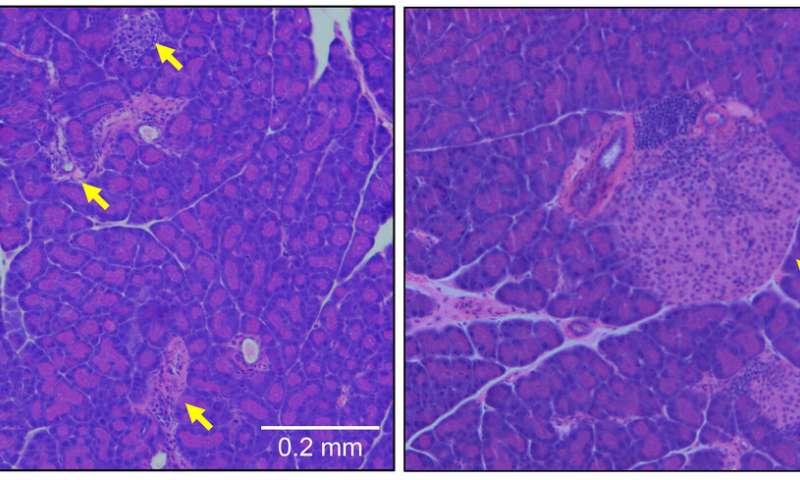 Researchers at the University of Utah School of Medicine have identified a new therapeutic target to treat patients with type 1 diabetes. The study, which will be published December 9 in the Journal of Experimental Medicine (JEM), reveals that inhibiting a protein called OCA-B protects mice from type 1 diabetes by limiting the activity of immune cells that would otherwise destroy the pancreas’ insulin-producing β cells.

Type 1 diabetes is an autoimmune disease in which the body’s immune system mistakenly attacks pancreatic β cells, cutting off the production of insulin. Patients require life-long insulin therapy to maintain appropriate blood glucose levels. At present, there are no treatments that can prevent the immune system from targeting β cells while preserving its ability to fight infection.

White blood cells called T cells can recognize specific molecules produced by invading bacteria and viruses. When T cells encounter these molecules, known as antigens, they turn on hundreds of genes that allow them to fight the infection. A protein called OCA-B binds to many of these genes and helps ensure that they can easily be reactivated if the T cells reencounter the same antigens at a later date.

In many autoimmune diseases, T cells mistakenly recognize and respond to antigens produced by normal, healthy cells. “Repeated antigen exposure is a common property of autoimmune responses,” explains Dean Tantin, a professor in the Department of Pathology at the University of Utah School of Medicine and a member of the Huntsman Cancer Institute. “We therefore hypothesized that targeting OCA-B would inhibit autoreactive, diabetogenic T cell responses.”

In the new study, Tantin and colleagues found that mice prone to developing type 1 diabetes were protected from the disease if they lacked OCA-B. Potentially autoreactive cytotoxic T cells—which can directly target and kill pancreatic β cells—remained inactive and did not accumulate in the pancreas. Potentially autoreactive helper T cells—which can recruit other immune cells to induce a damaging inflammatory response—accumulated in the pancreas but remained in a non-responsive state.

OCA-B regulates the activity of T cell genes by recruiting an enzyme called Jmjd1a to chemically modify the surrounding chromosomal DNA. Tantin and colleagues designed a small peptide capable of inhibiting the association of OCA-B with Jmjd1a and preventing the reactivation of isolated T cells in the lab. Injecting prediabetic mice with this peptide reduced the activity of autoreactive T cells, lowered pancreatic inflammation, and restored blood glucose levels to normal.