You are here:
Home / Health News / Synthesizing Cannabis from Yeast

A team from the University of California have developed a means of biosynthesizing the major cannabinoids of Cannabis sativa L.  in Saccharomyces cerevisiae using a galactose substrate. Their work presents a platform form the production of both natural and unnatural cannabinoids for study in the development of treatments for several health problems. 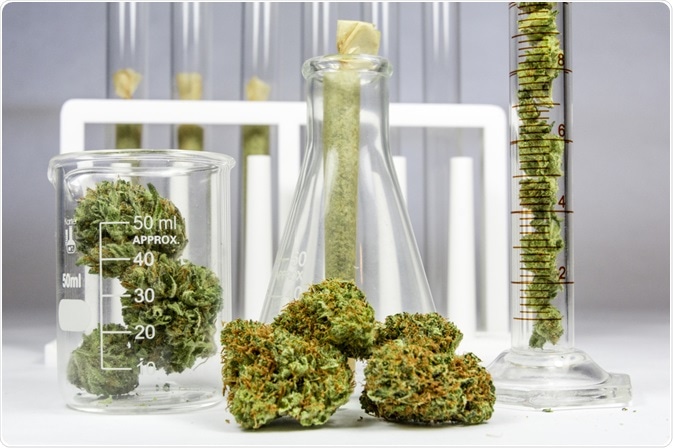 This was achieved by introducing cannabis pathway enzymes into yeast and manipulating the flux of native pathways central to cannabinoid synthesis.

A core component of their biosynthetic approach was exploiting the promiscuity of several pathways and their fatty acid substrates to produce cannabis analogs exhibiting different affinity and potency for receptor binding.

The limitations of the cannabis plant

Cannabis sativa has been cultivated worldwide for thousands of years. Research has investigated the constituents of cannabis and their analogs, demonstrating their potential medicinal properties.

Consequently, certain cannabinoid formulations have been legally approved for use in the treatment of several medical problems. However, the study and clinical use of cannabinoids are limited by legal limitations – as has the nature of cannabinoids whose structural complexity makes them unamenable to bulk synthesis.

To overcome this, synthesis in yeast represents an inexpensive means of producing cannabinoids as the repertoire of cannabinoids can be expanded and produced in greater quantities.

To achieve the production of cannabinoids in yeast, the group engineered the biosynthetic pathway. This began with establishing a pathway for the initial intermediate, olivetolic acid.

Olivetolic acid, together with the mevalonate pathway intermediate geranyl pyrophosphate (GPP) are the precursors to Cannabigerolic acid (CBGA). CBGA is the core cannabinoid from which others are derived. This conversion is performed by geranylpyrophosphate:olivetolate geranyltransferase (GOT).

Namely, CBGA is the precursor to tetrahydrocannabinolic acid (THCA) and cannabidiolic acid (CBDA) in addition to several of their cannabinoids. GPP was produced by introducing an expression cassette encoding the Enterococcus faecalis genes and overexpression of the native mevalonate pathway gene.

Hexanoyl-CoA, the precursor to olivetolic acid, was produced by an additional heterologous biosynthetic pathway using genes from several bacteria and the cannabis plant itself. Alternatively, hexanoic acid was used as a substrate for the enzyme endogenous acyl activating enzyme (AAE), which converts hexanoic acid into hexanoyl-CoA.

Overcoming a roadblock: compensating for absent GOT activity in cannabis

Keasling et al. were unable to detect GOT activity in the cassette taken from cannabis. To overcome this, the group identified a candidate prenyltransferase from Cannabis that displayed GOT activity.

Expression of genes encoding enzymes to produce olivetolic acid were also introduced. Resulting CBGA was subsequently transformed into the cannabinoid's THCA & CBDA through the action of the cannabinoid synthetases. Following exposure to heat, THC and CBDA were decarboxylated to produce THC and CBD – the primary cannabinoids of interest.

Expanding the chemical space of cannabinoids

Once the intrinsic cannabinoid pathways were expanded, Keasling et al. exploited their capacity to produce unnatural cannabinoids. These encompass cannabinoids that do not result from intrinsic pathways – and can be further derivatized with chemical groups, expanding the range of cannabinoid analogs possible.

Unnatural analogs all an area of active investigation as they demonstrate potentially greater medicinal properties. One of the major pharmacophores, the region of the compound responsible for the biological/ pharmacological interaction, of interest is the sidechain of THC as it can modulate the cannabinoid receptor.

A biosynthetic approach to produce this form of cannabinoid analog was devised by the team; this exploited the promiscuity of yeast metabolic pathways and the nature of the fatty acid precursors.

The team identified a function of the pharmacophore was further altered by post-fermentation modifications, yielding side chains that are difficult to produce by direct incorporation. Proof-of-concept PTMs was performed which yielded a range of products that demonstrated the chemical space accessible to modification can be expanded.

The combined effect was the skew of pathways towards precursors, and eventually, analogs of THCA.

This demonstrated the flexibility of the pathways, producing a greater variety of novel cannabinoids which can be further modified by chemical derivatization post-production – increasing the candidate pool of cannabinoids for potentially clinically useful formulations.

The work published presents the basis for future large-scale fermentation of cannabinoids that does not depend on Cannabis cultivation. The ability to control the flux through these engineered pathways and expand the repertoire of cannabinoids yielded promises a means to produce newer and better-optimized medicines.

Hidaya is a science communications enthusiast who has recently graduated and is embarking on a career in the science and medical copywriting. She has a B.Sc. in Biochemistry from The University of Manchester. She is passionate about writing and is particularly interested in microbiology, immunology, and biochemistry.