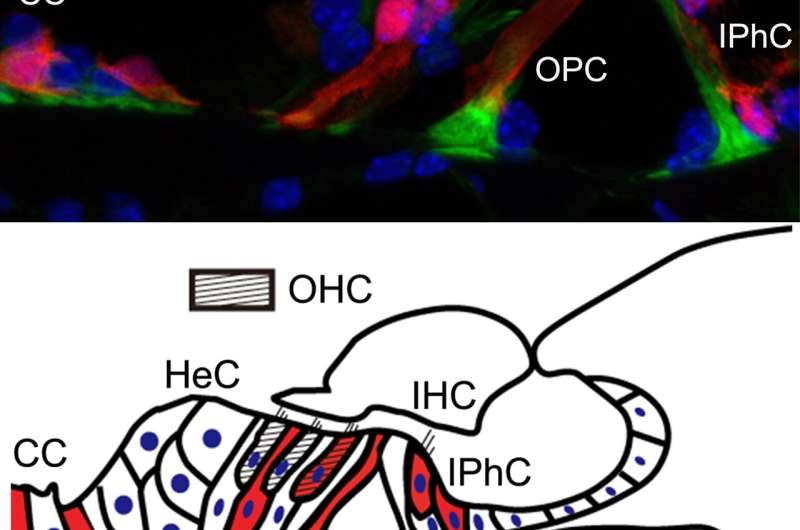 Professor Ueyama Takehiko (Biosignal Research Center, Kobe University) and the inner ear research group (Kyoto Prefectural University of Medicine) have identified the cell types in the inner ear cochlea responsible for the production of superoxide (Nox3-expressing cells). They achieved this by using genetically modified mice that they developed. The researchers discovered that these superoxide-producing cells increase in number in response to aging, noise damage, and ototoxic drugs, thus causing age-related, noise-induced and drug-induced hearing loss. In addition, they were able to suppress the onset of these three types of acquired hearing loss in genetically modified mice with no Nox3 expression (Nox3 knockout).

These results are expected to contribute towards the development of the world’s first drug-based treatment for hearing loss. Future treatments could involve removing reactive oxygen species from the cochlea, suppressing their production, or the development of Nox3 inhibitors.

These research results were published in the Journal of Neuroscience on April 12, 2021.

Sensorineural hearing loss is the most common type of sensorineural impairment. Around 5% of the global population have some kind of hearing impairment; however, there are still no established treatments, particularly pharmacological interventions, for these conditions.

It is said that hearing loss related to aging occurs in between 25%-40% of adults over 65, and there are around 10 million people with this condition in Japan alone. Noise-induced hearing loss is still one of the most common aftereffects experienced by former soldiers; however, they are not the only people who develop this impairment. According to a statement by the World Health Organization (WHO) in 2019, around 50% of young people aged 12-35 (1.1 billion people) are at risk of suffering from noise-induced hearing loss in the future due to overexposure to high noise levels resulting from the popularization of portable media players, such as smartphones. There is also drug-induced hearing loss, which can occur as a side effect of taking medications such as antibiotics, anticancer drugs, diuretics, painkillers and anti-inflammatory drugs. Consequently, the number of people with hearing loss is increasing in modern society, and developing treatments for this has become a pressing issue.

Superoxide, a kind of reactive oxygen species, produced by NADPH oxidases (Noxs) contribute towards the development of different types of sensorineural hearing loss. Among the seven types of Noxs found in humans, Nox3, which is specifically expressed in the inner ear, has been reported to be the origin of superoxide. However, the cell types in the inner ear cochlea that express Nox3 was not known, and it was not understood when nor how Nox3 is expressed. The mechanism by which it causes hearing loss was also unclear. 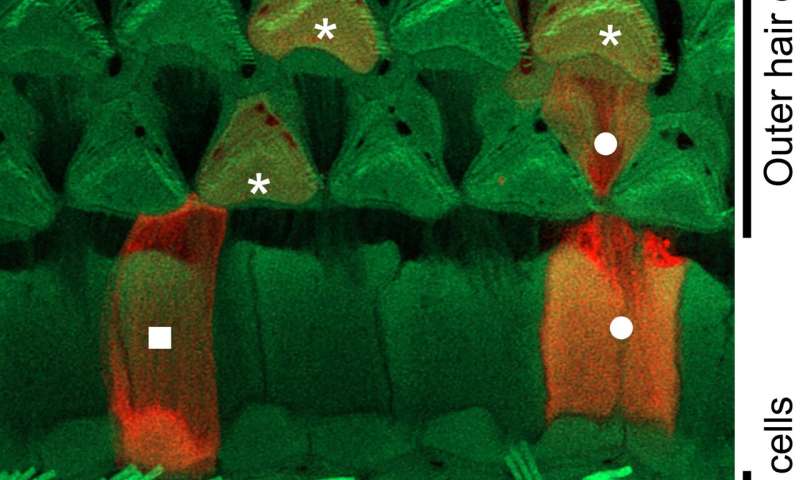 This research group has created many mouse models using gene manipulation in order to investigate the causes of hearing loss in patients and develop treatments for them. For this experiment, they developed a mouse model (Nox3-Cre;tdTomato), in which red fluorescent light-emitting proteins (tdTomato) would be expressed in the Nox3-expressing cells, and a Nox3 knockout mouse line (Nox3-KO), in which Nox–3 is unable to be expressed. Using these mice, they were able to identify the Nox3–expressing cells in the inner ear cochlea (which is responsible for hearing), in other words the cells responsible for producing superoxide (Figures 1 and 2). Furthermore, they also revealed that Nox3 plays an important role in the onset of all of the following major types of acquired hearing loss: age-related hearing loss, noise-induced hearing loss and drug-induced hearing loss (Figure 3).

Of the two types of hair cell inside the inner ear; outer hair cells are more vulnerable to various outside stimuli than the inner hair cells. A loss of outer hair cells is a known manifestation in many cases of hearing impairment. The research team investigated this in detail using two different types of genetically modified mice: mice that retained the Nox3-mediated ability to produce superoxide (heterozygous Nox3-Cre+/-;tdTomato) and mice with this ability removed (homozygous Nox3-Cre+/+;tdTomato). In the first group of mice, which retained the ability to produce superoxide, the inner hair cells emitted red fluorescence from tdTomato protein (in other words, they expressed Nox3). However, Nox3 was not observed in the outer ear cells, regardless of aging, noise, or cisplatin inducement (cisplatin is a well-known anticancer agent that has hearing loss as a side effect). Using the latter group of mice (that were unable to produce superoxide), the researchers found that the number of cells expressing fluorescent tdTomato protein (in other words, cells that originally had the ability to express Nox3) increased in response to aging, noise, and drug inducement. From these results, they determined that Nox3-expressing (i.e. superoxide producing) outer hair cells are poisoned by superoxide and die (apoptosis). In addition, the researchers revealed that loss of outer hair cells could also result from superoxide produced by surrounding supporting cells expressing Nox3, even if the outer hair cell didn’t express Nox3 itself.

This research identified the cells in the inner ear cochlea that express Nox3 (in other words, the origin of superoxide in the cochlea) and discovered that induced Nox3 expression causes outer hair cell apoptosis (loss/death) resulting in hearing loss (aging, noise, and drug related). Consequently, the researchers revealed that inhibiting Nox3’s expression or function could provide a promising approach for preventing the onset of acquired hearing loss. 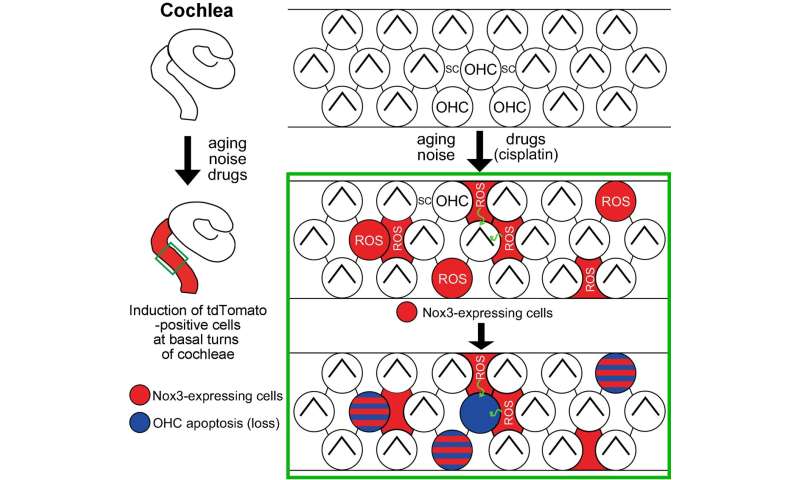 Hearing loss is the most common sensorineural impairment and is only expected to increase in the future; however, there is a need to develop pharmacological interventions for these conditions. This research has revealed that superoxide produced by Nox3 in the inner ear cochlea causes the apoptosis (loss/death) of outer hair cells, which causes at least the following types of acquired hearing loss: age-related, noise-induced, and drug-induced. The results also show that there is a possibility of preventing the onset of the major types of acquired hearing loss by inhibiting Nox3 expression and function in the cochlea. Fortunately, if such a Nox3 inhibitor were to be developed, its side effects on the rest of the body are likely to be mild because Nox3 has been reported to be specifically expressed in the inner ear.

As for genetic sensorineural hearing loss, progress is being made in developing treatments for each specific disorder separately. However, there are far fewer patients with genetic hearing loss compared to those with acquired hearing loss.

If a pharmacological treatment method were to be developed for the abovementioned three main types of acquired hearing impairment, it would not only be the first drug-based treatment for hearing loss in the world, but could also aid the development of such treatments for genetic hearing loss as well.