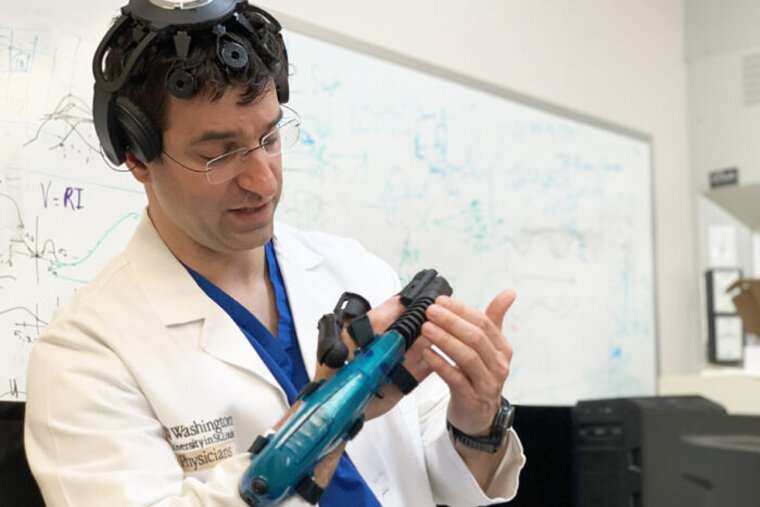 The IpsiHand system includes a wearable robotic exoskeleton that fits over a patient’s hand and wrist and assists with opening and closing the hand based on the patient’s thoughts. By mentally controlling the IpsiHand exoskeleton with the aid of BCI technology, patients may improve their upper extremity motor function, giving them more purposeful and effective movement of the affected hand, wrist and arm. Designed for use in the home or clinic, the IpsiHand system may assist stroke patients in recovering critical abilities such as feeding themselves, grasping objects and performing other everyday tasks, and is the first stroke-rehabilitation device that relies on a brain-computer interface.

The IpsiHand system has received “Breakthrough Device” designation from the FDA and has been granted De Novo marketing authorization by the FDA as well. The device is not yet available to patients, but Neurolutions is preparing to bring the device to market.

The underlying BCI technology was spearheaded by Eric Leuthardt, MD, professor of neurosurgery at Washington University School of Medicine. He co-founded Neurolutions in 2007 with Daniel Moran, Ph.D., professor of biomedical engineering at the university’s McKelvey School of Engineering, to further develop the technology. Founding CEO Kern Bhugra was brought on board several years later. Early St. Louis-based investors Biogenerator and Ascension Ventures were critical for the company’s development and technical advancement. The company is currently led by CEO Leo Petrossian, Ph.D., and chairman of the board Fred Khosravi.

IpsiHand is intended for stroke survivors who have chronic difficulty in moving or controlling an arm and hand. Most patients recover some movement in the first few weeks after a stroke, but improvement generally tapers off by six months, leading to stalls in progress.

“Generally, any motor impairments experienced by a patient six months after a stroke have been considered permanent,” said Leuthardt, who is an inventor of the technology that underlies the device. Leuthardt, who treats patients at Barnes-Jewish Hospital, is also professor of neuroscience, of biomedical engineering, and of mechanical engineering and applied science, as well as section chief of the Division of Neurotechnology in the Department of Neurosurgery. “What we’ve found with this device is that many patients can get a meaningful improvement in recovery of upper extremity movement when we wouldn’t expect them to get any. That’s not really true for any of the current therapies for stroke aimed at restoring function after the initial recovery period. One of the key elements that made it a breakthrough was the innovative use of a brain-computer interface. It’s also what gets us incredibly excited to be able to create a novel solution that may help millions of stroke patients.”

Breakthrough Device Designation is an FDA program to promote the development of innovative and effective solutions to critical, unmet health needs. Once a device receives the designation, the FDA prioritizes and resources the application to ensure timely review and market entry. De Novo authorization indicates that there is no similar, or substantially equivalent, medical device on the market today. None of this would have been possible without the partnership between numerous experts in academia and industry.

“Neurolutions’ success can be attributed to its multidisciplinary team,” Moran said. “It began as a research collaboration between researchers in the departments of Neurosurgery and Biomedical Engineering and then added more WashU expertise when researchers in the Department of Neurology and the programs in Physical Therapy and Occupational Therapy joined the team. The ability to easily collaborate within the WashU clinical and scientific community is what makes startups like Neurolutions thrive. Later it was the belief from Tara Butler and Ascension Health Ventures, design and development led by Kern Bhugra, and the new company leadership led by Leo Petrossian and Fred Khosravi that brought us across the finish line.”

When a stroke occurs, a person whose left side is paralyzed has sustained damage to the motor areas on the right side of the brain. But the left side of the person’s brain is often intact, meaning many stroke patients can still generate the brain signal that indicates an intention to move. The signal, however, goes nowhere since the area that executes the movement plan is out of commission. If, however, the signal of intention to move could be detected from the uninjured left side of the brain and translated into movement of the left hand with the aid of a brain-computer interface, stroke patients might be able to better recover control of the arm and hand by enhancing motor learning.

This insight forms the basis for the IpsiHand stroke rehabilitation device. Leuthardt and colleagues—including Washington University colleagues Moran; Alexandre Carter, MD, Ph.D., associate professor of neurology and of occupational therapy; Thy Huskey, MD, professor of neurology; and graduate students Kim Wisneski, David Bundy and Joseph Humphries, along with the Neurolutions design, development, clinical and regulatory teams—spent years elucidating the basic neuroscience of same-side movement control and developing the technology to take advantage of it. The technical work also was supported by scientists at the Oak Ridge National Laboratory and New York State Department of Health. Washington University’s Office of Technology Management patented the key discoveries and licensed them to Neurolutions.

The device is designed for use in the home as well as in the clinic. In clinical trials, stroke patients who wore the device and engaged in the therapy for approximately five days a week for 12 weeks showed statistically significant improvement in motor control. Such an improvement could mean the difference between being able to put on a pair of pants independently or being unable to do so.