Owing to rapid mutations, the continual emergence of several SARS-CoV-2 variants have been reported, among which some are regarded to be variants of concern (VOC), e.g., Alpha, Beta, and Delta. Other variants are known as variants of interests (VOI), e.g., Eta, Kappa, Lambda, and Iota. As a result, researchers keep an eye on the prevalence of these variants since they may pose a global threat. 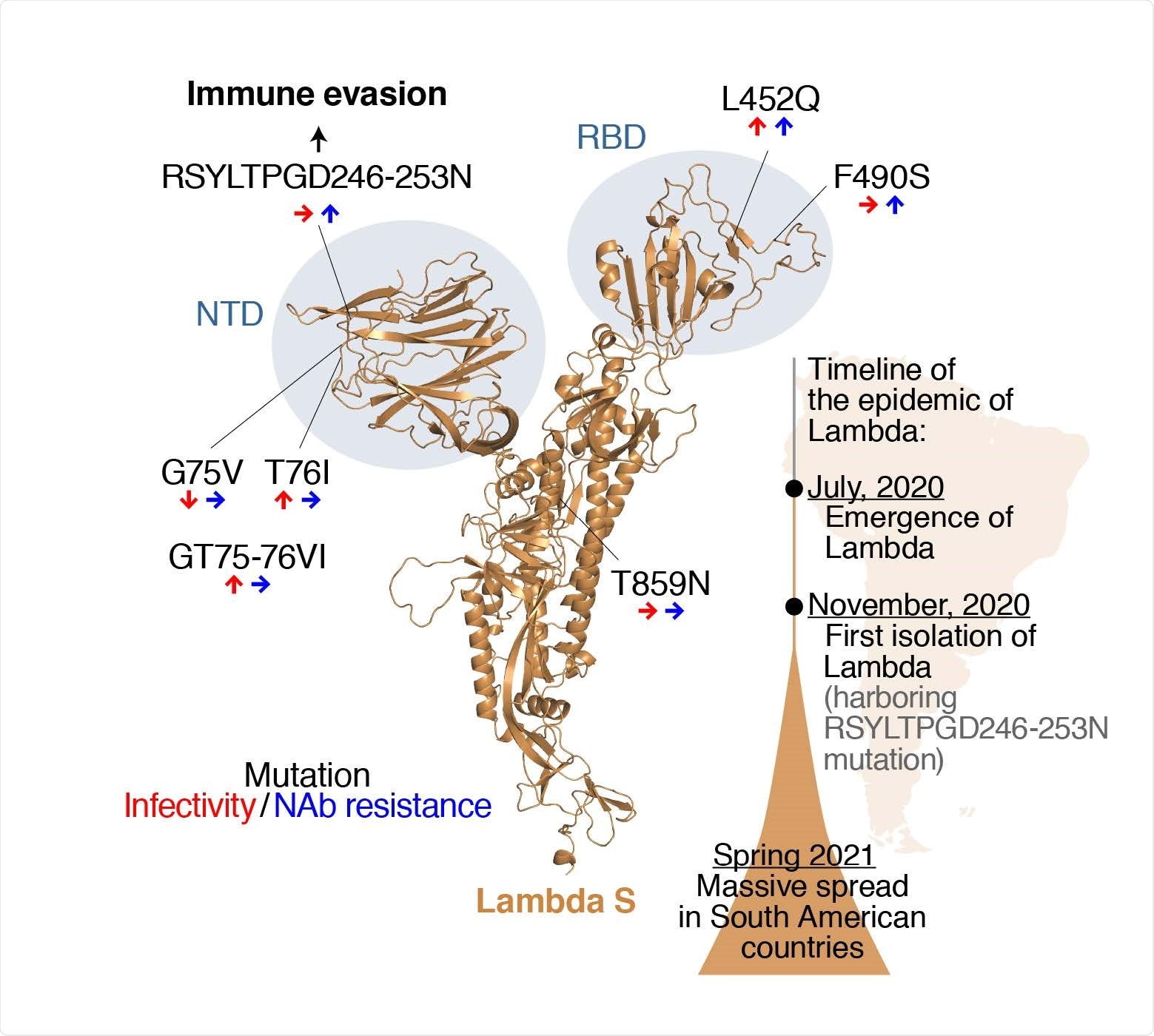 Why are SARS-CoV-2 variants more harmful than the original stain?

Multiple mutations are present in the Spike (S) protein of VOCs and VOIs, and these variants have been reported to be resistant to the neutralizing antibodies (NAbs) that were elicited post-vaccination or post-natural COVID-19 infection.

Since the receptor-binding domain (RBD) of the SARS-CoV-2’s S protein is immunodominant, a mutation in this site causes immune evasion. Also, mutations in the N-terminal domain (NTD) aid viruses in escaping neutralization. Therefore, to date, all the vaccines that received emergency use authorization (EUA) from various regulatory bodies are targeted towards the Spike protein.

Do all mutations have a negative impact on vaccine effectiveness?

No, all mutations do not disrupt the effectiveness of the vaccine-induced immune responses. For example, previous research has shown HV69-70 deletion does not have any effect on the sensitivity of neutralizing antibodies sensitivity, however, it increases viral infectivity.

Similarly, deletion of the LAL242-244 in the Beta variant does not affect the sensitivity to the vaccine-induced neutralization. However, it has shown little resistance to NTD-targeting neutralizing antibodies.

Therefore, these studies reveal that all mutations do not necessarily have negative effects on the efficacy of vaccines.

The Lambda variant belongs to the C.37 lineage, which has been newly designated as a VOI on June 14, 2021, by WHO. This variant is predominantly spreading in South American countries that include Chile, Peru, Argentina, and Ecuador. According to the Global Initiative on Sharing All Influenza Data (GISAID) database, the Lambda variant has been reported in 26 countries worldwide.

The rate of vaccination has been notably high in Chile. A recent study conducted in Chile has shown that around 60% of the population have received at least a single dose of the COVID-19 vaccine. Recently, during the spring of 2021, a rapid surge in COVID-19 cases was observed in Chile. This is because the Lambda variant is capable of escaping the immune responses induced via vaccination.

Evolutionary trait of the Lambda variant

A new study published on the bioRxiv* preprint server used molecular phylogenetic analysis to study the evolutionary trait of the Lambda variant.

In this study, the researchers have revealed that insertion of RSYLTPGD246- 253N mutation in the NTD of the Lambda S protein is associated with the increased virulence. This mutation is responsible for the rapid spread of the Lambda variant in the Southern American countries.

The authors of this study have indicated two of the critical virological features of the Lambda variant, namely, a) resistance to viral-induced immune responses due to the RSYLTPGD246- 253N, L452Q, and F490S mutations and b) enhancement in the rate of transmission due to the T76I and L452Q mutations.

This study revealed that the Lambda S is more resistant to the vaccine-induced antisera compared to the Lambda+N246-253RSYLTPGD S derivative.

Another important aspect of this is that RSYLTPGD246-253N mutation overlaps with a component of the NTD “supersite” indicating that it is the immunodominant site. Hence, mutation of this site has enabled the Lambda variant to escape immune responses elicited by the COVID-19 vaccine. 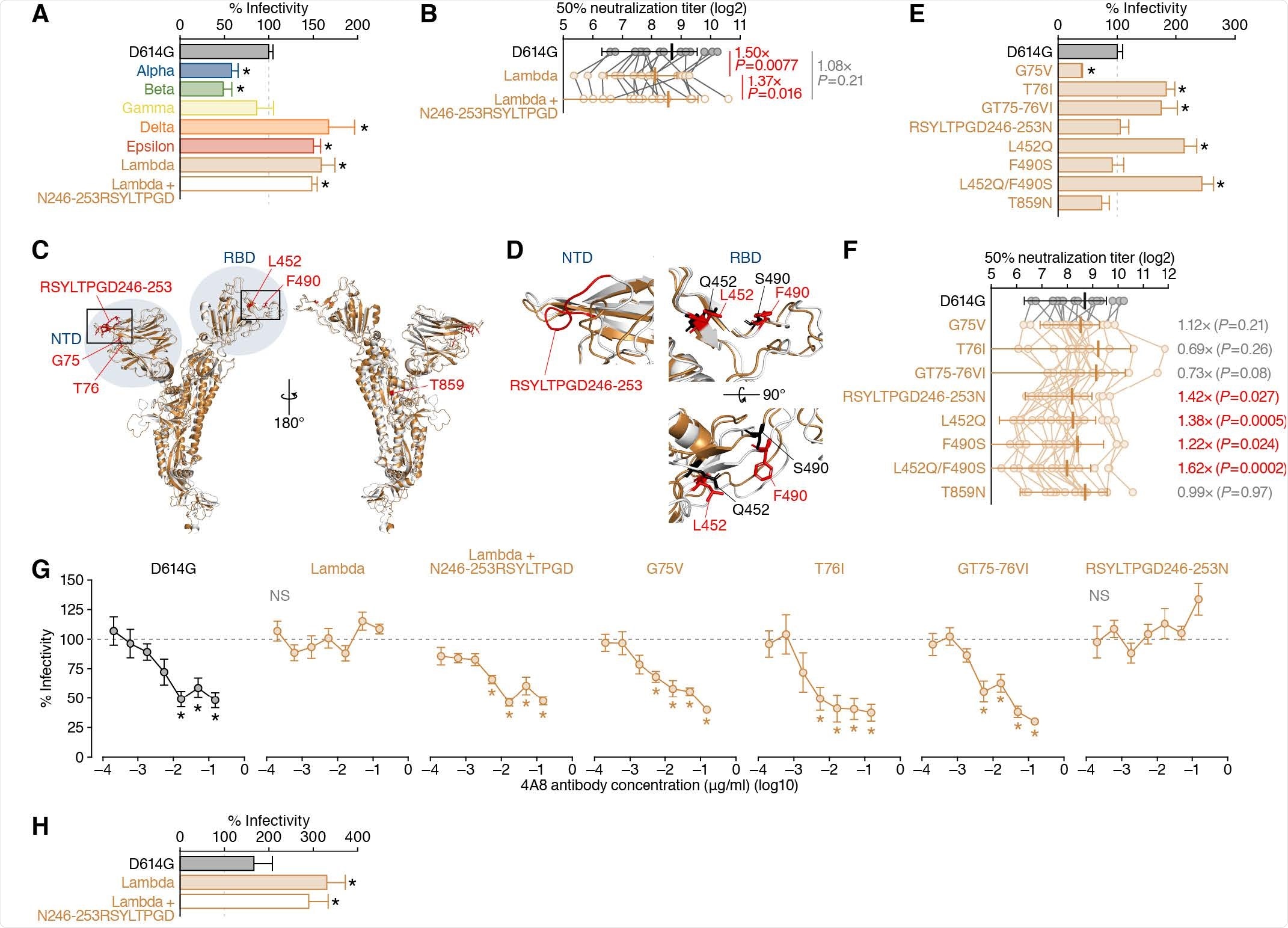 Virological and immunological features of the Lambda variant

The comparative study between the parental D614G S strain and the Lambda variant has shown significantly higher infectivity in the latter viral strain.

The findings of this study are in line with previous studies that had revealed that higher infectivity of the Lambda, Delta and Epsilon variants is due to the L452Q/R mutation. Scientists have explained that only increased viral infectivity does not attribute to a large-scale infection. Such an instance was observed for the Epsilon variant, where even after possessing high infectivity, it failed to spread in the human population. Thereby, WHO excluded it from the VOC/VOI classification on July 6, 2021. In order to understand if a variant would infect a large number of people, it is essential to determine two characteristic virological features of the variant, i.e., increased viral infectivity and evasion from the immune response. This study revealed that the Lambda variant possesses both these virological features.

Significance of this study

This study has elucidated the evolutionary trend of the Lambda variant using molecular phylogenetic analyses and virological experiments. Even though the Lambda variant has been classified as VOI, the authors of the present study have highlighted the potential of this variant to cause an epidemic in the future.

Priyom holds a Ph.D. in Plant Biology and Biotechnology from the University of Madras, India. She is an active researcher and an experienced science writer. Priyom has also co-authored several original research articles that have been published in reputed peer-reviewed journals. She is also an avid reader and an amateur photographer.