You are here:
Home / Health News / Scientists have discovered a new life-threatening disease that affects men, giving them fevers, blood clots, and inflammation 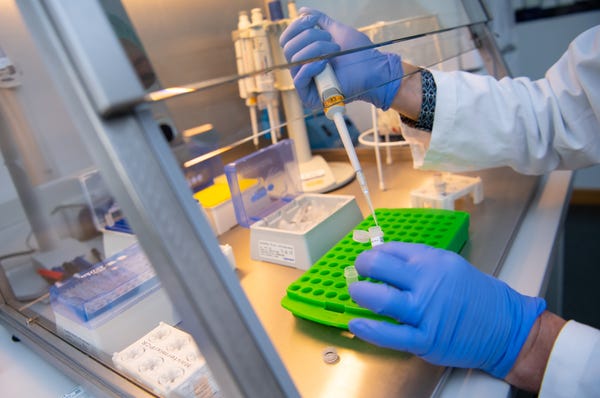 There are likely hundreds of men in the United States, if not more, who suffer from a just-discovered genetic disease that causes symptoms including blood clots in veins, recurrent fevers, lung system abnormalities, and — in 40% of patients — death.

Researchers from the National Institutes of Health discovered the disease, named VEXAS, by working backwards: Rather than grouping people with similar symptoms and searching for biological explanations, they searched the genetic makeup of 2,500 people for variations that could be linked to the wide-ranging symptoms of their undiagnosed inflammatory conditions.

"We had many patients with undiagnosed inflammatory conditions who were coming to the NIH Clinical Center, and we were just unable to diagnose them," said Dr. David B. Beck, clinical fellow at NHGRI and lead author of the paper, which was published Tuesday in the New England Journal of Medicine said in a statement.

"That's when we had the idea of doing it the opposite way. Instead of starting with symptoms, start with a list of genes. Then, study the genomes of undiagnosed individuals and see where it takes us."

Using that method, the scientists eventually identified three middle-aged men who all had the same mutations in a gene called UBA1. They later discovered 22 other men with the same mutations and similar symptoms, like blood clots and fevers.

The research team named the disease VEXAS after its key characteristics: vacuoles (unusual cavity-like structures in certain cells), E1 enzyme (which is related to UBA1), X-linked (per the chromosome it's connected to), autoinflammatory (meaning the immune system accidentally attacks the body) and somatic (since the condition seems ot pop up sometime during the patient's life, rather than at birth).

The researchers suspect VEXAS has only been found in men because it's linked to the X chromosome, of which men only have one. Women's additional X chromosome, they hypothesize, could be protective in this case.

Since the paper was published, 25 more patients with the syndrome have been found, but the study authors expect the true prevalence to be much higher, according to NBC News, since there are nearly 125 million people in the US with some form of a chronic inflammatory disease.

"This fascinating discovery is of immediate importance to rheumatologists and has far-reaching consequences of general clinical interest," Dr. Ephrat Levy-Lahad and and Mary-Claire King, researchers who weren't involved in the study, wrote in an accompanying editorial.

For scientists, the revelation that the "genome-first" strategy works may help identify other previously undiscovered genetic conditions.

For healthcare professionals, these discoveries will help diagnosis and treat patients with inflammatory conditions, and may improve the classification system for those diseases, the researchers hope.

For patients who've been battling mysterious symptoms and searching for effective treatments to no avail, the discovery is a game-changer, too.

"We don't always have a diagnosis, so we say, 'Well, let's throw the kitchen sink at the patient,'" Dr. Natalie Azar, an assistant clinical professor of medicine and rheumatology at NYU Langone, told NBC. "This opens up a whole world of potential therapeutics down the line."

What is Decembeard and how can you get involved?