You are here:
Home / Health News / Pain, but not as we know it: Neuropathic pain and the immune system

Pain, but not as we know it: Neuropathic pain and the immune system 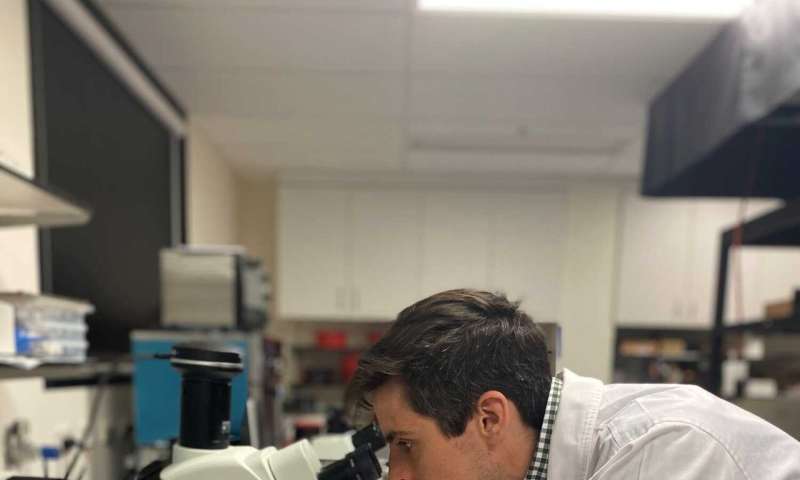 There are three main types of pain: nociceptive pain, the type we’re most familiar with, from bee stings and ankle strains to inflammatory arthritis. There’s neuropathic pain, arising from damage to the peripheral nervous system or the brain itself due to disease or injury. Then there are functional pain disorders arising from complex organic dysfunction, sometimes called ‘primary pain,” but most often just known as “other.”

Because we all experience pain, we think we know it; and, for a long time, researchers did too. Despite the extensive study of pain, only recently has the body’s immune system been implicated in pain, especially the neuropathic type. And that discovery has opened a new door of perception into the understanding of pain—particularly chronic pain, in which all three basic forms can be at play. In fact, chronic pain today is seen less as a symptom than itself an ailment.

Prof Mark Hutchinson, director of the Centre for Nanoscale BioPhotonics (CNBP), has—in ground-breaking research over many years—shown that signalling between immune cells in the brain and spinal cord are key players underpinning chronic pain, and arise from genetic predispositions.

In one key experiment, endotoxin, a subtle immune stimulant given intravenously, was given to volunteers before capsaicin—the fiery compound in chilli—was placed under the skin. Sure enough, volunteers became more sensitive to pain the more the immune system was amplified—helping to confirm neuroimmunology was at work in the pain process. But getting to the bottom of the effect has been a diabolical challenge.

Recently, CNBP researchers created dedicated cell lines to use in experiments that seek to elucidate the mechanism. “The capsaicin and endotoxin worked in tandem to exacerbate pain in humans,” said Samuel Evans, a Ph.D. candidate at CNBP’s University of Adelaide Medical School working alongside Hutchinson. “But we don’t understand how. So, I’m working that backwards into human cells and then animals, to see if we can tease it apart.”

Evans has developed a calcium-based bioassay, an analytical platform used to determine the concentration or potency of an effect via its impact on living cells or tissues, based on human embryonic kidney cells.

“We’re interested in how the immune system and the neural pathways of pain interrelate —particularly how they communicate in chronic pain, and how that changes from nociceptive pain into long-lasting and debilitating persistent pain,” Evans said. “That’s a very important question in the field at the moment: how does that transition occur?”

The immune system has evolved over millions of years to protects animals against viruses, bacteria, fungi and other parasites, and the immune system of humans is the most complex known. Hence, as with any research involving the immune system, ‘it often throws out more questions than answers,” said Evans. “But this bioassay has certainly been a useful tool, especially studying the individual effects of TRPV1 and TLR4, as well as their combined effect.”

TrpV1 is a protein that acts as receptor for capsaicin; while TLR4 is a pattern recognition receptor involved in cellular signaling and inflammatory response. Both have been targeted by drugs to reduce pain, with mixed success.

“There’s a need to understand these mechanisms because, at the moment, the drugs are either targeting the neurons or they’re just anti-inflammatories, and they don’t tend to work that well [for chronic pain], plus there’s often side effects,” said Evans. “If we can target the interaction itself, that would be more useful as a potential treatment than just targeting the receptor as a whole.

Related posts:
Tags: and as But immune it know Neuropathic not pain system The we
SHARE ON SOCIAL MEDIA
RELATED NEWS