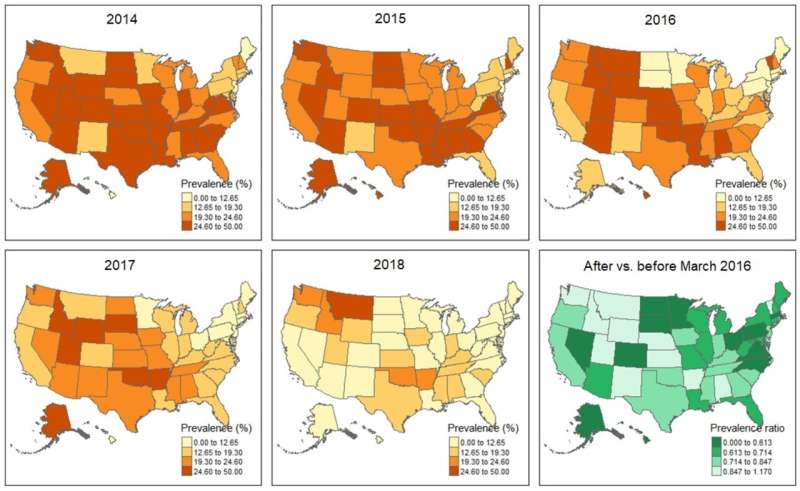 Less clear is the extent to which opioid use might also contribute to injuries resulting from non-fatal car accidents—and whether efforts to restrict opioid prescriptions over the past decade, including stricter new federal guidelines, have caused a decline in accidents.

To answer these questions, Yale researchers for a new study quantified how many U.S. drivers involved in non-fatal car injuries from 2014 to 2018 had opioid prescriptions at the time of their accidents. They found that prevalence of prescriptions among these drivers indeed dropped significantly after the Centers for Disease Control and Prevention (CDC) released new guidelines for prescribing opioids in 2016.

The findings suggest that efforts to curb opioid prescriptions—and the harm opioids can cause—are working, the researchers say.

“The opioid crisis has been a devastating blow to the U.S. with a decline in life expectancy, chaos in whole communities and regions, and untold human misery,” said Sten Vermund, the Anna M.R. Lauder Professor at Yale School of Public Health and an author of the study.

“Our study documents that with mitigation of opioid use, traffic accident injuries in which use of prescription opioids was involved declined substantially, a major indirect benefit of helping persons with opioid use disorder reduce their consumption.”

The study was published Nov. 4 in the International Journal of Environmental Research and Public Health.

For the study, the research team gathered data from IBM MarketScan Databases, which contain de-identified information on 255 million people with employer-provided health insurance from each U.S. state and Washington, D.C. Using this trove of data, the researchers identified 142,204 emergency department visits related to car accidents from 2014 to 2018 and assessed whether the injured drivers had an active opioid prescription at the time. (Data on opioid use at the time of an accident is limited by inconsistencies in drug testing and reporting, so prescriptions serve as an indirect measure of use.)

“This was a surprise to us, in part, because we hear mostly negative news about opioids” said Lan Jin, a researcher in the Department of Neurosurgery at Yale School of Medicine and lead author of the study. “But this is a rare piece of good news, and it suggests the measures taken by the CDC and others have worked.”

In 2016, the CDC issued a new set of guidelines for prescribing opioids to treat chronic pain to address the opioid crisis. The guidelines addressed when to initiate or continue opioid prescriptions for chronic pain, offered guidance on which drugs to use, what dosages to provide, and prescription length, and provided strategies for assessing the risk of and addressing harm caused by opioid use.

“We found that non-fatal crashes associated with opioids decreased by 28% after the CDC published its guidelines, suggesting that improved prescription practices might have helped not merely reduce prescription opioid use itself, but also opioid-associated motor vehicle crash injuries,” said Vermund.

The CDC hasn’t been alone in trying to reduce opioid use—lawmakers and agencies at the state and federal levels have taken steps as well. These include measures to restrict opioid supply, like through drug take-back programs, restrictions on dispensing and prescribing opioids, and electronic databases that monitor prescription prevalence. Efforts have also been made to reduce demand through targeted patient education and initiatives to boost medical treatments for opioid use disorder.

“There’s been a very comprehensive campaign targeting both the drug manufacturing side and the medical provider side to make sure that the use of opioids for chronic pain results in less harm,” said Jin. “This study offers a positive note for these types of policies and going forward, policymakers and organizations like the CDC should consider implementing them before drugs with severe adverse effects become available to the public and before tragedy strikes.”

Chemo in Afternoon Works Better Than in Morning, but Only in Women