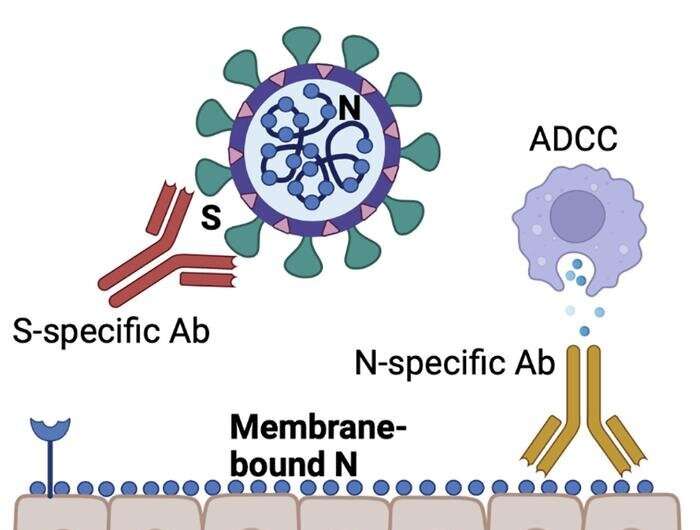 An entirely new approach to monoclonal antibody therapy shows that targeting the more genetically stable internal protein of the SARS-CoV-2 virus rather than the surface spike protein can also clear SARS-CoV-2, reports a study from Northwestern Medicine and the University of Illinois at Chicago (UIC), published in the Journal of Clinical Investigation.

Some monoclonal antibody treatments have stopped working because the spike viral protein undergoes high rates of mutation, rendering some viral variants resistant to current antibody therapies. The novel approach could provide a new armament in treatments that could preserve effectiveness as the spike protein mutates.

This is the first time that therapeutic monoclonal antibodies have targeted an internal rather than a surface protein.

“These results may also contribute to the development of combined antibody therapies for SARS-CoV-2 as well as other viral diseases such as HIV by targeting unconventional viral proteins that are not typically targeted by monoclonal antibody therapies,” said co-corresponding author Pablo Penaloza-MacMaster, Ph.D., assistant professor of Microbiology-Immunology.

The first author is Tanushree Dangi, Ph.D., a research associate in the Penaloza-MacMaster laboratory.

How this approach is different

All the monoclonal antibody therapies for SARS-CoV-2 are based only on the surface spike protein because this viral protein mediates entry into the cell.

“It’s like a key and lock system to enter the cell,” Penaloza-MacMaster said. “You want to have antibodies that prevent the key—the spike—from entering the lock. But the key has been changing as the virus mutates, and some antibody treatments are no longer effective at blocking the key from opening the lock. The current antibody therapies could lose efficacy in the future. We asked whether targeting the internal part of the virus by an antibody therapy would confer protection.”

The infected cells will be covered in nucleocapsid and then the antibodies will bind to the nucleocapsid on the surface of the cells, which will attract immune cells to eliminate the infection, Penaloza-MacMaster said.

“Antibodies not only prevent the virus from entering the cell, but they can also act like a megaphone that calls cells of the immune system, telling them to eliminate the infected cell,” Penaloza-MacMaster said. “It’s like the antibody is marking the infected cells for destruction by calling, ‘Hey, here’s an intruder!'”

In the study, scientists infected mice with COVID-19 through their noses, the same way humans contract it. Next, one group of mice were treated with the monoclonal antibodies targeting the nucleocapsid protein. Another group received control antibodies, not targeting this protein.

Investigators then examined the lungs to see the amount of virus and inflammation. The mice that received the nucleocapsid antibody had significantly less virus and less inflammation in their lungs. They also had less inflammatory cytokines that are known to worsen COVID-19 when they are produced at high levels.