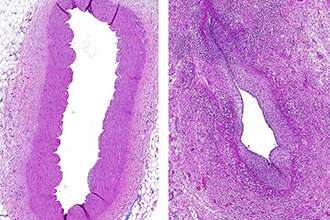 The WEHI-led study showed that treatment with drugs called mTOR inhibitors can prevent the formation of coronary artery damage and aneurysms, a much-feared complication of KD.

Importantly, mTOR inhibitors are already known to be safe and effective in other clinical uses, meaning this therapy could potentially be trialed rapidly in the clinic for children with KD.

KD mainly affects children under five years of age and is the most common cause of acquired heart disease in children in developed countries. Up to 300 Australian children are diagnosed with the disease each year.

The specific cause of KD is unknown, but it is generally accepted that infections with common respiratory viruses, including coronavirus, can trigger the disease.

A key clinical feature of KD is inflammation of blood vessels, particularly the coronary arteries that supply blood to the heart.

When severe, this inflammation can cause “remodeling” of the coronary arteries that lead to narrowing and aneurysms in damaged arteries, where the walls weaken and blow out like a balloon.

Severe narrowing and large aneurysms as a result of KD can lead to potentially fatal damage to the heart and predispose patients to heart attacks later in life.

Professor Ian Wicks, Joint Head of Clinical Translation at WEHI, said even children with KD who survive aneurysms may sustain long-term damage to their coronary arteries, requiring treatment including surgery.

“Current treatments effectively reduce the risk of developing potentially deadly aneurysms in most children, but we need more options for children whose KD is resistant to these treatments.

“The risk of blood clotting and heart attack in these children makes it very important that we identify therapies that can prevent coronary artery damage.”

“This is particularly exciting as mTOR inhibitors have a proven safety and efficacy profile in related clinical uses, such as preventing arteries from re-narrowing after coronary stenting in adults,” he said.

Cause of coronary damage identified

The WEHI team first investigated the cellular processes that cause KD and showed that remodeling and narrowing of the coronary arteries is driven by overactivity of local connective tissue cells called cardiac fibroblasts.

The researchers were able to identify the source of this abnormal activity as a particular cell-signaling pathway called the mechanistic target of rapamycin (mTOR).

Analysis of the hearts of patients who died as a result of KD confirmed that mTOR signaling was enhanced or “up-regulated” in fibroblasts within inflamed coronary arteries from these children.

“Our research confirmed that mTOR tells fibroblasts in the coronary artery to multiply, causing thickening of the innermost layer of the artery wall,” explained Dr. Stock, Senior Research Officer in the Wicks Laboratory at WEHI.

“We then focused on blocking mTOR signaling with rapamycin—the prototype and best-known mTOR inhibitor—as a way of disrupting this proliferation of coronary fibroblasts and hence preventing aneurysms and narrowing of the coronary arteries.”

The study, published in the journal Arthritis & Rheumatology, showed that treatment with rapamycin, also known as sirolimus, limited the growth and activity of fibroblasts in a pre-clinical model of Kawasaki disease.

mTOR inhibitors are currently used in adults to treat and prevent stenosis of coronary arteries and to prevent organ rejection after transplantation.

The drugs can be given orally, giving them a clinical advantage over treatments that must be injected or given intravenously.