You are here:
Home / Health News / New Science Reveals the Best Way to Take a Pill

New Science Reveals the Best Way to Take a Pill

I want to tell you a story about forgetfulness and haste, and how the combination of the two can lead to frightening consequences. A few years ago, I was lying in bed about to turn out the light when I realized I’d forgotten to take “my pill.”

Like some 161 million other American adults, I was then a consumer of a prescription medication. Being conscientious, I got up, retrieved said pill, and tossed it back. Being lazy, I didn’t bother to grab a glass of water to help the thing go down. Instead, I promptly returned to bed, threw a pillow over my head, and prepared for sleep.

Within seconds, I began to feel a burning sensation in my chest. After about a minute, that burn became a crippling pain. Not wanting to alarm my wife, I went into the living room, where I spent the next 30 minutes doubled over in agony. Was I having a heart attack? I phoned my sister, a hospitalist in Texas. She advised me to take myself to the emergency room to get checked out.

If only I’d known then about “Duke.” He could have told me how critical body posture is when people swallow pills.

Duke is a computer representation of a 34-year-old, anatomically normal human male created by computer scientists at the IT’IS Foundation, a nonprofit group based in Switzerland that works on a variety of projects in health care technology. Using Duke, Rajat Mittal, PhD, a professor of medicine at the Johns Hopkins School of Medicine in Baltimore, created a computer model called “StomachSim” to explore the process of digestion. 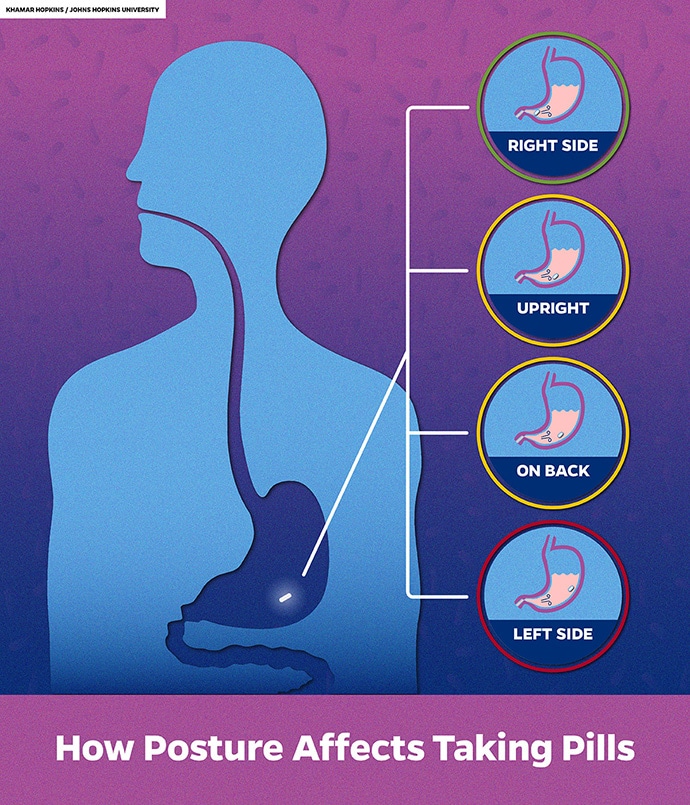 Their research, published in the journal  Physics of Fluids , turned up several surprising findings about the dynamics of swallowing pills – the most common way medication is used worldwide.

Mittal says he chose to study the stomach because the functions of most other organ systems, from the heart to the brain, have already attracted plenty of attention from scientists.

“As I was looking to initiate research in some new directions, the implications of stomach biomechanics on important conditions such as diabetes, obesity, and gastroparesis became apparent to me,” he says. “It was clear that bioengineering research in this arena lags other more ‘sexy’ areas such as cardiovascular flows by at least 20 years, and there seemed to be a great opportunity to do impactful work.”

Your Posture May Help a Pill Work Better

Several well-known things affect a pill’s ability to disperse its contents into the gut and be used by the body, such as the stomach’s contents (a heavy breakfast, a mix of liquids like juice, milk, and coffee) and the motion of the organ’s walls. But Mittal’s group learned that Duke’s posture also played a major role.

The researchers ran Duke through computer simulations in varying postures: upright, leaning right, leaning left, and leaning back, while keeping all the other parts of their analyses (like the things mentioned above) the same.

They found that posture determined as much as 83% of how quickly a pill disperses into the intestines. The most efficient position was leaning right. The least was leaning left, which prevented the pill from reaching the antrum, or bottom section of the stomach, and thus kept all but traces of the dissolved drug from entering the duodenum, where the stomach joins the small intestine. (Interestingly, Jews who observe Passover are advised to recline to the left during the meal as a symbol of freedom and leisure.)

That makes sense if you think about the stomach’s shape, which looks kind of like a bean, curving from the left to the right side of the body. Because of gravity, your position will change where the pill lands.

In the end, the researchers found that posture can be as significant a factor in how a pill dissolves as gastroparesis, a condition in which the stomach loses the ability to empty properly.

How This Could Help People

Among the groups most likely to benefit from such studies, Mittal says, are the elderly – who both take a lot of pills and are more prone to trouble swallowing because of age-related changes in their esophagus – and the bedridden, who can’t easily shift their posture. The findings may also lead to improvements in the ability to treat people with gastroparesis, a particular problem for people with diabetes.

Future studies with Duke and similar simulations will look at how the GI system digests proteins, carbohydrates, and fatty meals, Mittal says.

In the meantime, Mittal offers the following advice: “Standing or sitting upright after taking a pill is fine.If you have to take a pill lying down, stay on your back or on your right side. Avoid lying on your left side after taking a pill.”

As for what happened to me, any gastroenterologist reading this has figured out that my condition was not heart-related. Instead, I likely was having a bout of pill esophagitis, irritation that can result from medications that aggravate the mucosa of the food tube. Although painful, esophagitis isn’t life-threatening. After about an hour, the pain began to subside, and by the next morning I was fine, with only a faint ache in my chest to remind me of my earlier torment. (Researchers noted an increase in the condition early in the COVID-19 pandemic, linked to the antibiotic doxycycline.)

And, in the interest of accuracy, my pill problem began above the stomach. Nothing in the Hopkins research suggests that the alignment of the esophagus plays a role in how drugs disperse in the gut – unless, of course, it prevents those pills from reaching the stomach in the first place.

Physics of Fluids: “Computational modeling of drug dissolution in the human stomach: Effects of posture and gastroparesis on drug bioavailability.”